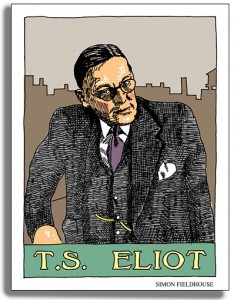 January 4th marks the anniversary of the death of T.S. Eliot.

In remembrance of the poet, we offer this recording of him reading his poem The Waste Land.

“The Waste Land” is a long poem written by T.S. Eliot. It is widely regarded as “one of the most important poems of the 20th century” and a central text in Modernist poetry. Published in 1922, the 434-line poem first appeared in the U.K. in the October issue of The Criterion and in the U.S. in the November issue of The Dial. It was published in book form in December 1922.

The poem’s structure is divided into five sections. The first section, titled The Burial of the Dead introduces the diverse themes of disillusionment and despair. The second, titled A Game of Chess employs vignettes of several characters—alternating narrations—that address those themes experientially. The Fire Sermon, the third section, offers a philosophical meditation in relation to the imagery of death and views of self-denial in juxtaposition influenced by Augustine of Hippo and eastern religions. After a fourth section that includes a brief lyrical petition, the culminating fifth section, What the Thunder Said concludes with an image of judgment. (Wikipedia)

If you want to read along, here is the text of the poem
(pops in new window)