Big in Heaven:
A Collection of Stories

But these stories are neither nostalgic nor sentimental. They bear almost no resemblance to Christian fiction I’ve read. Stephen Siniari, himself an Orthodox priest, evokes a place where honest, broken people are to various degrees touched by Christ’s mysterious power. As David R. Fox writes in the foreword, “Father Stephen’s stories are about the kind of people perhaps never even imagined by most American readers… stories that break the mold of what a religious story out to be…”

It’s relatively easy to portray evil and corruption—especially caricatures of religious sin, but Siniari takes the bold step of trying to make goodness compelling. But he does not do this by inserting sermons into the dialogue—not even from the leader of Saint Alexander, Father Naum himself. Goodness and love are embodied. The stories are like icons to ponder.

The first two stories set a realistic tone with great power. The first, “Big in Heaven,” immediately immerses the reader into the world of a flawed congregation where love is at work. One of the parishioners, Mary, vocalizes the anti-immigrant wing of the church. She yells at Raskova, an elderly woman, “Get your foreign ass over here and clean up this baby shit.” Raskova served as a tank mechanic in the Soviet Army in WWII and was a prisoner at Dachau Concentration Camp. She responds, “Don’t worry for me… I clean baby shit. It a small thing (sic)… but big in heaven.” Sadly, “nobody knew she was lonely… no one knew her suffering. They never bothered to look in her eyes.”

While the first story powerfully prepares the reader for the kind of people Father Naum serves, the second, “Two Things,” takes us into the broken beauty of Naum himself. Like Moses in the wilderness with Israel, Father Naum let his anger overtake him to the point of alienating his family. To help stay humble, Naum keeps two things in his prayer corner as reminders—objects he broke in anger. In his own home, the proximity has exposed his pretense, and the whole church knows.

In the stories that follow, the reader sees that Naum’s weakness qualifies him to be a sympathetic priest. He is not what we would typically call a “good” man. He is flawed, broken, and lonely. Yet, he loves. He extends himself to people who are sometimes apathetic, dismissive, or ungrateful. He is humble, but no self-pitying coward. Sometimes, in addition to his priestly duties, Naum has supported himself by working at the local putty factory. As one man observed, “Nobody said anything about the putty on his steel-toed boots, or the turpentine solvent, or whatever smell was on his beard and his clothes.”

In most of the stories, Naum encounters people who are struggling with things like loneliness, illness, doubt, or anger. He does not “solve” their problems with sermons or advice. He is a profound listener who “catechized best by being taught rather than by teaching.” In “Three-Stitch Prayer,” Naum learns a prayerful simplicity from Colleen, the wife of an arrogant bishop, who she says “is a bastard.” I expected her to be trapped by a sense of victimization. But no. The narrator tells us, “Here was a girl, Naum was sure, who sensed deep calling to deep… and who seemed to carry a prenatal memory of the liturgical nature of our first home in the Church of Paradise.” As Naum listened in awe, Colleen shared the three things she learned about prayer: ask for prayer, ask to be real, and ask for stillness to hear his voice. She knew her spiritual poverty. Her prayers were not accomplishments—just ways to lean into her weakness with God’s mercy.


Siniari’s characters are often those society pities but does not value. In “An Ordinary Sunday,” we meet Curtis, an altar server with Downs Syndrome. He “knew the liturgy in a way not even Naum could understand… But Curtis could not read.” Another pastor told Curtis’s mother that if he can’t read and understand, he can’t be saved. But the narrator says, “when he entered the altar to serve, the look of innocent joy on his face gave the rest of us a preview of what counted for a believer in the Liturgy of heaven.” In the same story, Evdokia, an autistic young woman, comes to church for the first time. She keeps talking in a loud voice during the service and then enters the area where only the clergy are to gather, asking loud questions about the service’s meaning. Evodokia’s sister Anthia approaches Naum to apologize. “She could see by his face, Naum was still stumbling in wonderment over his encounter with Evdokia.”

Siniari is a master of setting and physical description as he draws attention to Orthodox liturgies with their sensory elements like icons, candles, chanting, and incense. “The woodwork was steeped in spice and smoke, like barrel wood aged in frankincense. The fragrance of life was ingrained in every fibrous layer—each petition, every promise, every prayer permeated the whorls of every balustrade, panel, and rail.” Siniari refers to altars, holy bread, vestments, icon corners, and the iconostasis. But he does little by way of explanation. Since these ceremonies were unfamiliar to me, I was at first frustrated by it. But in the Orthodox tradition, one learns by doing, by experience. While Naum loved enacting the ceremonies of the church, love was his ultimate value. As he said, “Orthodox blessing does not add anything. It reveals what is already true, what is already present. It shows the truth that God created all things and called them good. Us too.”

I highly recommend Big in Heaven. Stephen Siniari will help you imagine a different kind of church leader—not a CEO, entertainer, professor, or therapist—but a worshiper, a humble incarnation of broken beauty. And a different picture of church emerges from these stories—a family of contrite people trying to move away from pretending. It’s worth asking whether something ancient and glorious has been lost because of our modern preference for cultural relevance. 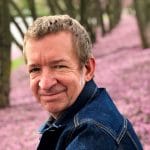 Mark Bair lives in Columbus Ohio. He writes about finding beauty in the brokenness. He is currently working on a novel about the longing for Eden. You can follow him on Twitter and Facebook (@markjbair on both) or subscribe to his blog: www.markjbair.com