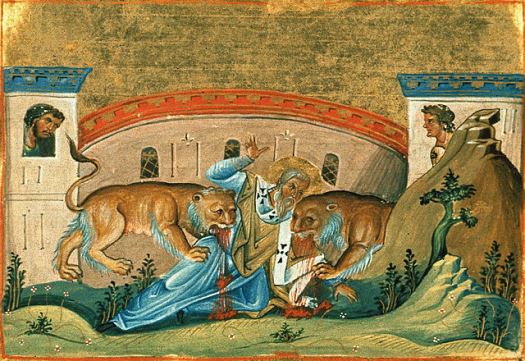 Today is the Feast of St. Ignatius of Antioch, who was martyred near the end of the first century.

Here is the story of his martyrdom, from The Ante-Nicene Fathers (Volume 1).
[ Which is available as a FREE ebook from CCEL ]

This story was told and recorded for the encouragement and empowerment of the Church of that day, who were faced with widespread persecution.  Not all details in this story should be taken as factual, although the basic story of how Ignatius is martyred is usually accepted as fact.

The Martyrdom of
St. Ignatius of Antioch

Chapter I.–Desire of Ignatius for martyrdom.
When Trajan, not long since, succeeded to the empire of the Romans, Ignatius, the disciple of John the apostle, a man in all respects of an apostolic character, governed the Church of the Antiochians with great care, having with difficulty escaped the former storms of the many persecutions under Domitian, inasmuch as, like a good pilot, by the helm of prayer and fasting, by the earnestness of his teaching, and by his [constant] spiritual labour, he resisted the flood that rolled against him, fearing [only] lest he should lose any of those who were deficient in courage, or apt to suffer from their simplicity. Wherefore he rejoiced over the tranquil state of the Church, when the persecution ceased for a little time, but was grieved as to himself, that he had not yet attained to a true love to Christ, nor reached the perfect rank of a disciple. For he inwardly reflected, that the confession which is made by martyrdom, would bring him into a yet more intimate relation to the Lord. Wherefore, continuing a few years longer with the Church, and, like a divine lamp, enlightening every one’s understanding by his expositions of the [Holy ] Scriptures, he [at length] attained the object of his desire.

Chapter II.–Ignatius is condemned by Trajan.

For Trajan, in the ninth year of his reign, being lifted up [with pride], after the victory he had gained over the Scythians and Dacians, and many other nations, and thinking that the religious body of the Christians were yet wanting to complete the subjugation of all things to himself, and [thereupon] threatening them with persecution unless they should agree to worship dæmons, as did all other nations, thus compelled all who were living godly lives either to sacrifice [to idols] or die. Wherefore the noble soldier of Christ [Ignatius], being in fear for the Church of the Antiochians, was, in accordance with his own desire, brought before Trajan, who was at that time staying at Antioch, but was in haste [to set forth] against Armenia and the Parthians. And when he was set before the emperor Trajan, [that prince] said unto him, “Who art thou, wicked wretch, who settest thyself to transgress our commands, and persuadest others to do the same, so that they should miserably perish?” Ignatius replied, “No one ought to call Theophorus wicked; for all evil spirits have departed from the servants of God. But if, because I am an enemy to these [spirits], you call me wicked in respect to them, I quite agree with you; for inasmuch as I have Christ the King of heaven [within me], I destroy all the devices of these [evil spirits].” Trajan answered, “And who is Theophorus?” Ignatius replied, “He who has Christ within his breast.” Trajan said, “Do we not then seem to you to have the gods in our mind, whose assistance we enjoy in fighting against our enemies?” Ignatius answered, “Thou art in error when thou callest the dæmons of the nations gods. For there is but one God, who made heaven, and earth, and the sea, and all that are in them; and one Jesus Christ, the only-begotten Son of God, whose kingdom may I enjoy.” Trajan said, “Do you mean Him who was crucified under Pontius Pilate?” Ignatius replied, “I mean Him who crucified my sin, with him who was the inventor of it, and who has condemned [and cast down] all the deceit and malice of the devil under the feet of those who carry Him in their heart.” Trajan said, “Dost thou then carry within thee Him that was crucified?” Ignatius replied, “Truly so; for it is written, I will dwell in them, and walk in them.’ ” Then Trajan pronounced sentence as follows: “We command that Ignatius, who affirms that he carries about within him Him that was crucified, be bound by soldiers, and carried to the great [city] Rome, there to be devoured by the beasts, for the gratification of the people.” When the holy martyr heard this sentence, he cried out with joy, “I thank thee, O Lord, that Thou hast vouchsafed to honour me with a perfect love towards Thee, and hast made me to be bound with iron chains, like Thy Apostle Paul.” Having spoken thus, he then, with delight, clasped the chains about him; and when he had first prayed for the Church, and commended it with tears to the Lord, he was hurried away by the savage cruelty of the soldiers, like a distinguished ram the leader of a goodly flock, that he might be carried to Rome, there to furnish food to the bloodthirsty beasts.