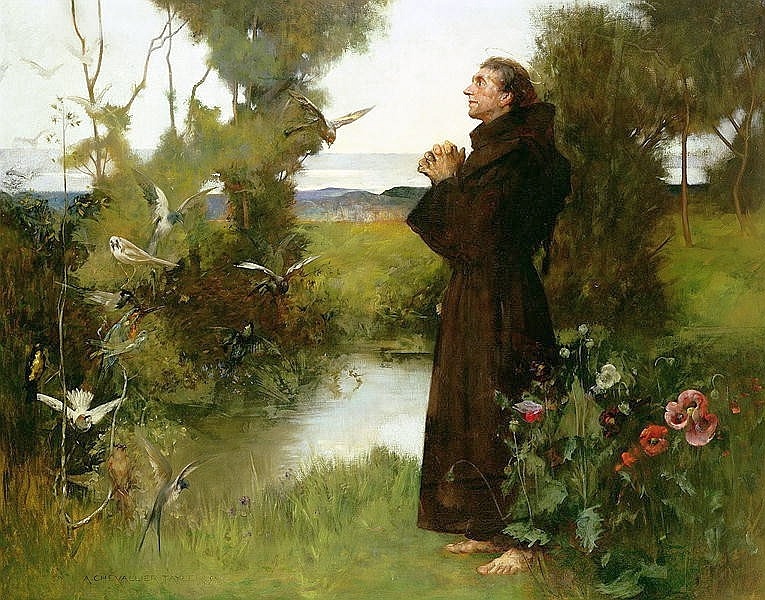 (A Very Diverse List of)
Ten of the Best Books
on St. Francis

This is the first in an on-going series of “playlists,” in which we recommend books around a particular theme. We offer this first one in honor of the Feast of St. Francis, which is today.

“Making a mixtape (or playlist) is the opposite of indifferent. It’s heartfelt, purposeful — often a subtle form of flirtation. … [The playlist] is a way of making yourself known, an interpersonal form of show business, of making news, of replicating sounds and words you find important. It’s like poetry, because poetry is what you can’t say in any other way.”
— David Dark, The Sacredness of Questioning Everything
(Our 2009 Book of the Year. Read our Review…)
*** Watch for more ERB playlists in the coming weeks and months, and for a forthcoming essay on playlists as a way of doing theology.

Use the comments below to let us know what you think…
Are there books that should be added to or deleted from this list?

1) St. Francis: A Novel by Nikos Kazantkazis
[Paperback – Amazon ]
My favorite, because Francis’s story is told with all the fiery passion for which Kazantzakis (author of The Last Temptation of Christ) is known.  The Saint’s struggles as depicted here reveal not a super-human, but a real person to whom we can relate.

2) St. Francis of Assisi by G.K. Chesterton
[ Paperback – Amazon ] [ Kindle Ebook – Only $2.99!]
Another creative account of Francis’s life, by the literary and theological giant.  Chesterton emphasizes “the extent to which Francis’ love of women and animal kind made him a thinker and Christian practitioner that was truly ahead of his time.”

This recent book, illustrated with stunning papercut art by Pamela Dalton is by far the loveliest one on this list. “The cover of this enchanting book indicates ‘reimagined’ by Paterson instead of the typical author credentials.  Reimagined best describes this work as Paterson lovingly captures the spirit and essence of this beloved hymn without sacrificing its beauty or poetry.   The emphasis throughout remains focused on giving praise to God for all of his creation and reminding readers to give thanks for the earth around us.” (from our review by Leslie Starasta)

4) Song of St. Francis – Tomie dePaola
[ Hardback – Amazon ]
In a similar vein, comes this rendition of Francis’ canticle, illustrated by beloved illustrator Tomie dePaola.  This portrayal of Francis reminds us “how sweet it is to rejoice and give thanks for life and love.”

5) The Little Flowers of St. Francis – Br. Ugolino
[ Hardback – Amazon ] [ Kindle edition – Only $0.99 ]
This classic account of Francis from his own times, although it tends toward hagiography, set in motion the long tradition of reflecting on the meaning of Francis’s life.

6) The Road to Assisi: The Essential Biography of St. Francis
[ Amazon – Paperback ]  [ Kindle Edition ]
“Paul Sabatier, a French Protestant and the first modern biographer of St. Francis, sought to find the man beneath the layers of myth and legend. Sabatier portrayed a fully human Francis, much like each of us in our awkwardness, insecurities, and fear, but also a gentle mystic and passionate reformer who desired to live as Jesus taught his disciples. This updated, twenty-first century edition of Sabatier’s biography is supplemented by the insights of many other scholars and writers, from Bonaventure and Dante to G. K. Chesterton and Umberto Eco.”

7) Francis of Assisi: The Life and Afterlife of a Medieval Saint by André Vauchez
[ Amazon – Hardback ]
I have only read snippets of this soon-to-be-released-in English biography, but the word on the street is that is an excellent account of Francis’ life.  The original French edition won the coveted Prix Chateaubriand award.

8 ) Brother Sun, Sister Moon. Movie by Franco Zeffirelli, starring Graham Faulkner/Judi Bowker.
[ Amazon – Free to watch for PRIME  ]
Although the imagery of this movie (and its soundtrack by Donovan) is heavily influenced by the counterculture of the early 1970’s, when it was released, it is still a beautiful and compelling account of Francis’s life.

9) The Saint and the Sultan: The Crusades, Islam, and Francis of Assisi’s Mission of Peace by Paul Moses
[ Hardback – Amazon ]  [ Kindle ]
A recent, detailed historical account of one of the lesser-known, but no less powerful stories from the life of Francis.  [ Read an excerpt ]

10) Francis and Jesus by Murray Bodo, OFM
[ Paperback – Amazon ]
Bodo, a Franciscan monk, looks at how St. Francis related to Jesus. “Here we see a multi-dimensional, yet internal Francis as the ultimate disciple of Jesus: Francis as sufferer, in the wilderness, as itinerant, as misunderstood, in prayer, as teacher, as lover and protector of the poor, in authority while subject to God’s authority, in community, as healer, as wounded.”

*** What are your favorite St. Francis books ?

Have an idea for a thematic playlist that would be of interest to ERB readers?
We’re looking for catchy playlist ideas to run in the near future.  Contact us with your best idea(s)…