An Eclectic Approach to Writing
A Review of

Hotly in Pursuit of the Real:
Notes Toward a Memoir
Ron Hansen

Ron Hansen’s latest release is one of literary reflection. Hotly in Pursuit of the Real is titled “Notes toward a Memoir” because the text doesn’t function exclusively as an autobiography, but rather an assembly of reflections on his development as a writer, as well as miscellaneous musings on the writing process. Hansen has enjoyed a long career as a fiction writer, and his own eclectic approach to writing is evident here, to the reader’s great fascination. I say eclectic because Hansen approached writing from an untraditional avenue, as a Catholic priest who later pursued a creative writing degree at the illustrious University of Iowa, the same institution that launched the careers of other spiritual writers like Flannery O’Connor. Like O’Connor, Hansen believes that writing and spirituality are not mutually exclusive, but flow like rivers into a larger and vast sea of inspiration and experience. In fact, the title of this collection originates from O’Connor’s proclamation that culture requires Christian writers to confront and interrogate the rosy-lens, sentimental portrayal of Christian literature and demands that Christian engage “nature” in all its myriad forms.

Yet, Hansen’s version of spirituality differs from other conventional “Christian” artists. Hansen’s bibliography is wide and vast, ranging from stories about the Dalton gang, Hitler’s niece, and Jesse James, to a shipwreck which influenced poet Gerard Manley Hopkins and a nun questioned for experiencing stigmata. This impressive array boasts Hansen’s natural talent, while thoroughly illustrating his unique blend of spirituality and literature. This reviewer stumbled upon Hansen after a friend mentioned the book Exiles. Soon after, I read Mariette in Ecstacy with great fervor. Hotly in Pursuit of the Real is a particular pleasure for fans of Hansen; the book delves deep into Hansen’s intense love for literature at an early age, his training at Iowa under novelist John Irving, his reflection on other great literary works, and equally fascinating, his personal perspective on the purposes of literature.

For Hansen, literature has a moral prerogative. In the title essay, Hansen writes “I have discovered in the late night conversations with many of my friends have had profound experiences of God’s hand, God’s voice, God’s solace. God’s gentle invitation. But how often are those experiences written about?” (9). This question seems to be the impetus for many of Hansen’s works. It is important to note that Hansen’s depictions of the Christian life are not overtly evangelical, but rather illustrate the struggle of the transformed life against the tarnished backdrop of secular culture. Like his predecessor O’Connor, Hansen does not shy away from the difficult topics, but rather confronts them with bravado. This particular book does not, per se, highlight the ways in which Hansen intentionally wove his faith into his literature, but how his spiritual experiences informed his writings.

Hotly in Pursuit of the Real is divided into five sections: 1) a small gathering of spiritual essays, 2) two interviews with Hansen about fiction writing, 3) essays which explore Hansen’s process in writing some of his greatest fictional works, 4) Hansen’s literary essays on various works, and 5) a miscellany of reflective essays including two on the game of golf. Although this final section is not wholly critical, it gives the reader a better understanding of Hansen as an individual aside from his literary and spiritual pursuits. Personally, I found the first three sections to be of particular interest because I am infinitely fascinated with a writer’s inspiration to compose various works (specifically, I enjoyed his essay “Hopkins and the ‘Wreck of the Deutschland’ Writing Exiles”). Given that Hansen exhibits a varied range of literary endeavors, such insight is invaluable.

Most casual readers will be attractecd to sections one and three, noting the context and experience which produced such works as The Assassination of Jesse James by the Coward Robert Ford, Exiles, A Wild Surge of Guilty Passion, and The Kid. For those interested in Hansen’s motif of “the wild west” will find his short essay, “Why the West?” an instructive read. Those with “literary tendencies” will find section four illuminating. Hansen is an astute observer of human psychology, and a highly critical expert of good prose. Hansen references critic Harold Bloom in his highly entertaining essay, “Shakespeare and Me,” and yet Hansen himself applies a well-trained analysis to some of his favorite works. His various insights on author Thomas Merton were most enlightening. Admittedly, I had only a cursory knowledge of the authors Hansen mentions in section four: Edwin O’Connor, Frank Monaco, and Alan Boyle. However, Hansen’s extrapolation of the text encouraged my cursory knowledge to bloom into a peripheral interest.

Not every fiction writer can be equally successful as a nonfiction writer, but Hansen does it with great ease. Hansen is rare talent in a wading pool of mediocrity, and his works, in this reviewer’s sincere opinion, should receive more accolades. Flannery O’Connor firmly believed that Christians writers should be the loudest and clearest voices on the secular stage. Although this may be the case with a spare number of writers (Marilynne Robinson comes to mind), Ron Hansen is counted among them as one who fulfils O’Connor’s cherished vision. Hotly in Pursuit of the Real is an enjoyable read from page one, similar to Hansen’s previous nonfiction release A Stay Against Confusion. Hanson is a writer to be treasured and adored for his skill, style, and intellect, but also for his courage to write tales that resonate with Christians who are fairly skeptical of “feel good stories” that parade themselves as authentically spiritual. Humankind is messy and unkempt, and Hansen rightly portrays them as such. His works are a breath of fresh air, and this text only adds to his astounding bibliography. This is what Christian literature looks like in the postmodern age, much to my relief: stories that rely on creative expression while rooted in a deep and unrelenting morality. Hotly in Pursuit of the Real is a book I recommend with great enthusiasm. 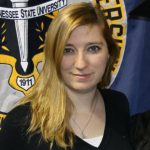 Crystal Hurd is an educator, researcher, and poet from Virginia. She is the author of Thirty Days with C.S. Lewis: A Women's Devotional as well as several articles on C.S. Lewis. She currently serves as Reviews Editor for Sehnsucht: The C.S. Lewis Journal.
Find her online at CrystalHurd.com