Just Tell the Truth: A Call to Faith, Hope, and Courage
Richard Lischer

Writing a sermon must be a tricky task. How do you tell an assembled congregation that they ought to give away their money, time, and energy in service to others, ally with the poor and oppressed, forgive folks who have wronged them innumerable times, respond to violence with peace, return love for evil, and be willing to sacrifice their hobbies, jobs, identities, and even their very lives for the sake of other people—and make it all seem like good news? Sermons that can describe both the burden and the beauty of following Christ are always welcome, especially when centered in today’s climate.

Richard Lischer’s Just Tell the Truth: A Call to Faith, Hope, and Courage is a selection of thirty-seven sermons that demonstrates truth-telling in a dishonest and fallen world. The author artfully balances the good news of the gospel and the steep cost of faith without resorting to sentimentality. Every sermon in the book stands as a signpost of what faith in our contemporary context could look like. Lischer makes connections between hope and despair, the earthy and the ethereal, in a gracious and thoughtful way. There are six themed sections, but each sermon can stand alone as a short meditation. There is a familiar mix of Bible verses or stories with personal anecdotes, movie and book references, inspiring quotes, and some pastorly humor. Between three and five pages each, every chapter is a quick read but they deserve a pause at the end because the rich content invites reflection. There isn’t a poorly written piece in the book. Each sermon has wit, empathy, and insight.

The author’s intentions for writing are obvious. The climate of political dialogue is ugly, and there is a “growing disregard for any standard of truth that permeates our social discourse” (xi). A chapter titled “Counterstory” makes a connection from the story of Ruth to some current sociopolitical issues by discussing how God is writing a different ending than we expect, “The stories we think rule the world are always being rewritten by another story” (115). In this story, God lifts up Ruth to challenge her nation’s xenophobia. Lischer likewise asks who are the people that Americans leave outside the gates.

In the chapter that gives the book its title, Lischer explains that part of the steep cost of faith is that, “the religion of the cross is not about winning. It begins with sacrificial love—Christ’s love for us and for all people. It includes welcoming the stranger, caring for the sick, forgiving enemies, forgoing violence, upholding life, and glorifying God in all that we do . . . [these aren’t] optional lifestyle choices for Christians. They are the hallmarks of those who claim his name” (99).

A description of the poor widow from Mark 12 helps us make sense of the seeming conflict. Instead of being preoccupied by status and power, Christians can take faith in her meek example. The widow, who can only offer two small coins to the treasury, “takes her place beside a poor child in a manger, the paralytic at the pool, and the beggar on our block. Which is to say that in God’s way of being in the world—his secret rule—she counts for everything . . . she is totally dependent on God and out of her dependence gives everything” (185). The cost is only steep if you live by worldly illusions. The hope of God is not about how we can succeed in our kingdom; it is about how God invites us to participate in his upside-down kingdom.

Lischer beautifully describes the counterstory again and again. In a poetic piece about Christ’s incarnation, he describes Jesus as “the one abandoned in the dumpster. He’s also the scared and pregnant teenager. He’s the jobless guy loitering on East Main. His manger is an AIDS (or a COVID-19) ward. His cross is a refugee camp. He is a suicidal teenager. He is you at your lowest pulse. As low as hell itself. For you, he has gone derelict” (28). A passage like this feels foreign in a culture that so heavily praises money, beauty, skill, and power. This alternate narrative about a kenotic God who enters desperate places to give us hope is worth repeating and emphasizing. “God’s first and last word to us is a promise of life. That life is signified in Jesus’s triumph over the grave. It’s based on Jesus’s own testimony, given in this, our darkest hour: ‘I have seen the future,’ he says, ‘and it is as cold and hard as a tomb. And as glorious as the saints in heaven’” (44).

Lischer does not delve deeply into exegesis or textual criticism, but instead makes thoughtful points that flesh out interesting topics. One example is his analysis of the parable of the shrewd manager (Luke 16). The manager has been dishonest in his dealings with others, and when confronted by his boss, he comes up with a clever way to settle his debts. Instead of some common ways to preach about this rogue—swinging between admiring him for being shrewd with his money or admonishing him for swindling others—Lischer pushes deeper to see that he is a man in the middle of a crisis who sees an opportunity. He compares the shrewd manager to the prodigal son and shows how both have squandered an opportunity and jumped at a chance for redemption: “The two parables teach the same gospel: God can save anybody” (126). He wraps up the reflection with a literary example from Flannery O’Connor’s “Revelation,” where a self-righteous character finds herself in pig slop, both literally and figuratively, and has a mystical vision of heaven. She, like the manager, the prodigal, and the rest of us, are accepted despite our unfaithfulness. We see the opportunity in a crisis. “Our lives now turn on [God], as the world turns on the axis of his cross. Even now, he confronts us not with proven methods of success but with a loaf of bread and a cup of wine” (127).

The cumulative effect of reading thirty-seven smart and courageous sermons is that the writing starts to sound familiar. And making the gospel counterstory familiar can help reorient our posture away from the common fictions we absorb in our daily lives and toward God. The book lives up to its title by telling—or perhaps re-telling—some truths that connect the burdens and beauty of Christ, reminding us that he makes the story into good news. 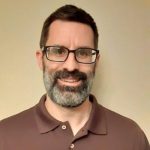 Justin Haskell is a reader, writer, and editor. He lives in Portland, Oregon with his wife, two daughters, cat, and sometimes roommates. In his free time he plays guitar and watches (or plays) just about every sport.