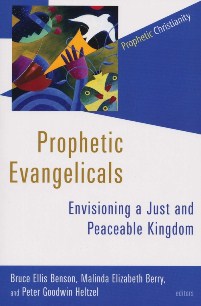 Continued Improvisation Around a Common Theme

Editors Benson, Berry, and Heltzel introduce Prophetic Evangelicals by situating it as a collection of answers to the common questions, What does it mean to follow Jesus? and What is the nature of the good news (euangelion)? The editors draw upon the imagery of a prism (a nod to the Evangelicals for Social Action publication?) to explain the format and intention of the book: “As the gospel – the light of Christ – passed through shalom, we can suddenly see the full spectrum of colors that represent the themes we explore in the rest of this book because they give prophetic faith its definition” (3). Prophetic evangelicalism is thus imagined to be a continued improvisation around a common theme (31), a collection of images of what it looks like to follow Jesus and embody the good news at the heart of truly evangelical faith.

Prophetic Evangelicals is not representative of a final word on evangelical faith and practice, but is rather an ongoing conversation within the evangelical church. A major point of praise for this book is the inclusion of different voices, including the perspectives of women, men, African-Americans, Native Americans, Hispanics, liberals, proponents of (neo-)orthodoxy, and the non-heterosexual. These perspectives are representative of some, though not all, of the contributing perspectives in the American evangelical church today. What is missing, however, is any contribution from the more conservative-leaning side of evangelicalism – which makes for a somewhat unbalanced collection. Missing also are any perspectives from those ministering in contexts outside of North America, leaving the reader with the impression that evangelicalism is a distinctly North American phenomenon – which it is not. It would have been very interesting to see how evangelicals in other parts of the world are engaging in theology, ministry, and self-reflection.

Within Prophetic Evangelicals there are many highlights worthy of note. Among them are the essays from David Gushee, Chris Boesel, Ruth Padilla-DeBorst, Raymond C. Aldred, and Telford Work. There are other essays worth reading and engaging, but the following paragraphs are reflections on the essays which I found most compelling.

David Gushee contributes the piece on Shalom, fleshing out the concept deeply and systematically and centering it on an ethic of sanctity that encompasses all life. The biblical witness of justice, sanctity, and shalom exists, Gushee says, as an answer to the particular experiences of injustice and violence within Israel (66). To the plight of his people, God speaks through the prophets, through the Messiah, and the church. Gushee’s essay ends with a personal reflection upon the disjointed relationship of American evangelicalism, shalom, and torture. For American Christians to pursue shalom, to consistently hold to a sanctity ethic, must mean a committed ministry to end torture.

In one of the best contributions to the book, Chris Boesel’s essay, News, meditates on “the good news” upon which the evangelical faith is ostensibly based. In so doing, Boesel wishes to aid the evangelical church in recapturing true Christian faith from “several going alternatives – conservative evangelical, liberal-progressive, and liberationist theologies” (104). He argues that conservative evangelicalism has too often self-defined by polemic: we’re right, you’re wrong; we’re in, you’re out theology. He critiques conservative evangelicalism as a tradition of the predominately white, middle- and upper-class American. His appraisal and critique of liberal-progressive evangelicalism seems especially incisive, as he takes liberal evangelicals to task for their all-too-common theological pluralism. If the good news is indeed good news, Boesel notes, it is necessary to share it (113-114). Boesel then engages liberationist perspectives and corrects the over-emphasis on the poor and the downcast as the primary recipients of this good news (115). Lastly, Boesel notes that a truly evangelical understanding of the good news is not simply critical of other theological options, rather it engages in honest self-scrutiny as we ask how and to what ends our own evangelism is complicit in the structures of imperialism and injustice.

Ruth Padilla-DeBorst offers a meditation entitled Mary that is both helpful and risky, given the evangelical church’s reticence to theological reflection on the mother of Christ. Her meditation is an excellent one on the gospel call to obedience, using Mary – a scared, unmarried virgin called upon by God – as an image for radical, evangelical obedience. Though it is not an expressed aim of the essay, Padilla-DeBorst lifts up the experiences and ministries of women throughout the church, an important aspect of the church which often goes unvoiced in evangelical churches today. Ultimately the essay stands not simply as a clarion call solely for women, but calls upon all Christians, men and women alike, to submit to the call of God in pursuit of the ministry of the gospel.

One of the most compelling and convicting essays is Raymond C. Aldred’s Freedom. Aldred’s essay is much different from every other essay in the volume, as it begins with a specific issue – the sad plight of the First Nations peoples in North America (a people-group of which he is a part) – and works outward. For better or worse, most of the other contributors in Prophetic Evangelicals take a theological abstraction – Church, Kingdom, or Hope – and describe it as a concept, only then extrapolating a specific application of the concept in practical terms. Aldred does the opposite: he begins with the experience of North American aboriginals and ends with a theological doctrine of justice and freedom in the face of colonial and neocolonial oppression. This is a risky move, given evangelicalism’s typical political and social leanings, but it is an honest one and a very critical one – and in this way, Aldred’s piece may be the most prophetic essay of the bunch.


A final highlight of the collection is Telford Work’s concluding essay, Hope. In it Work takes to task the conservative and the liberal aberrations of Christian (evangelical) faith, offering this incisive critique of misplaced hope and apocalyptic expectation:

Evangelicals on the left decried George W. Bush’s use of apocalyptic language to describe the War on Terror, later holding up even more brazenly messianic images of Barack Obama. The spectacle reminds me of Rome’s desperate idolaters who ask, ‘Who is like unto the beast? Who is able to make war with him?’ (Rev 13:4 KJV). I no longer believe any of these movements has what it takes to resist the lure of worldly power. Frankly, I miss the old-school fundamentalists who thought they had better things to do than join such conspiracies (192).

The hope of Christianity is not to be found in the political parties or social movements du jour; these are shifting sand at best, consuming quicksand at worst. Work helpfully calls evangelicals on the right and on the left back to a prophetic stance towards the machinations of worldly power. Because of this, Work’s essay is an outstanding closing contribution to the collection.

For all the strength in its various essays, Prophetic Evangelicals is not without its questionable assumptions and unhelpful assertions. Though there are contributors who resist this trend, Prophetic Evangelicals as a whole seems most at home among those evangelicals who lean to the left, both politically and theologically. What this amounts to at times is a solid critique of conservatism (which is welcome!), but only a rather soft-handed prodding of liberalism (which, frankly, is not enough). Political conservativism and liberalism are both sources and perpetrators of great evil in the world today; a bit more balance in the prophecy against the two sides of the aisle would have been more helpful. Furthermore, the editors seem to misread both Hauerwas and Yoder in their introductory essay, setting up what amounts to an unfruitful, if unintended, dichotomy between the ministry of the church and the “cause of the common good” in the world (my words). Neither Hauerwas nor Yoder represent the final word on theology and praxis, but both do, in my opinion, offer helpful and constructive critique, a welcome aid to the crisis of the church today. Yet despite the bias towards the moderately-liberal, the editors should be commended for including perspectives which challenge their own (Boesel, Work).