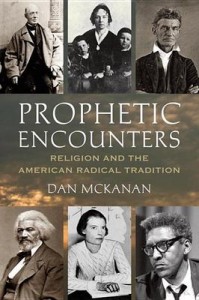 “Did I Not Bring the Philistines from Caphtor?”

Religion and the American Radical Tradition

In a presidential election year in the United States, citizens and persons of faith find themselves bombarded with spin and media messages aimed at the contradictory purposes of appealing to the ideological poles of the major party bases and to the apparently shrinking political center.  In the midst of this partisan communication, persons of faith frequently find their only options to be either the Religious Right or the Secular Left.  The media storyline often assigns persons of faith to the Religious Right of James Dobson and the Family Research Council while the other pole is left to the secular, often godless, Left.  Into this environment Dan McKannan’s Prophetic Encounters usefully reminds us that the Left is not godless or secular, and indeed has a quite natural religious expression.

McKannan provides a needed correction to the common narrative of the left as secular.  For progressive evangelicals, Prophetic Encounters paints a picture of the Left that goes beyond their pride in Finneyite revivals, abolition and Sojourners to illustrate the diversity of a Left with pagan witches and Jews as well as Unitarians and mainline liberal Protestants who faithfully labored to change American society.  Perhaps this religious impulse is a moving of the Spirit.  If so, the message of radical religion extends broadly beyond the Christian tradition, though the Christian tradition is prominent among radicals, so that religion represents leaven to the radical tradition.

Critical to McKannan’s project is his definition of radical or the Left, even if he does not take sufficient care to distinguish it from more progressive movements in contemporary contexts.  For McKannan, a social movement that extends the values of liberty, equality and solidarity defines the Left or the radical tradition even if other actors outside of the Left can also claim those values.  Tracing the “wayward spiritual pilgrimages” (10) of many radicals/leftists, he puts forward the model of prophetic encounters to organize his history. From a base of the “encounter of identity” where people who live outside of institutional power come together to share stories and claim an identity, he moves to “personal encounter” where these empowered groups come together and bring forth individuals to embody the radical movement.  Out of these encounters comes a “collective encounter” which brings people together in the manner of liberation theology.  While identity politics and charismatic leaders within social movements can merit substantive criticism, still McKannan’s prophetic encounters remain concerned “with relationships among people rather than human connections to spiritual realities or the material world.” (7)

Accordingly McKannan links anecdotes and brief biographies with brief interludes of often perceptive analysis.  Beginning with the white working class of the “Working Men” and early African American radicals, he moves on to the abolitionists, the early women’s movement and the diversity of spiritualist and nonChristian traditions before taking up the tale of the developing labor movement, settlement houses and socialists.  From the formative period of the Depression he chronicles the development of new leadership leading into the civil rights radicalism spawned from the South before the confrontations arising from the Vietnam War gave form to a newly invigorated conservatism.  Finally he leads his readers into the rebuilding of the Left , the re-emerging women’s movement, the LGBT movement and the resistance represented by the Sojourners efforts and others to the Right before concluding with his own stocktaking about the prospects for the radical tradition in our time.

He introduces readers to a variety of both familiar and perhaps new names of those who made an American tradition over  two hundred years.  To familiar names like Frederick Douglas, Dorothy Day, William Lloyd Garrison, Reinhold Niebuhr and Elizabeth Cady Stanton, he adds names that are perhaps new to many, such as Will Campbell from the southern civil rights movement, or the pacifist A. J. Muste, or George Lippard from early stirrings of the labor movement, and a host of other radicals or their close kin.

Click on the link below to continue to page 2…