The Experience of Wonder

Reviewed by by Mark A. Jenkins

When I turned 16 years old, full of questions about faith, I told my minister-father that I no longer wanted to attend church. To his credit, he accepted this on one condition: that we meet at a restaurant between his two Sunday services. After, I could then go my way and he would return to church. Doing this, he accomplished two things. First, he kept in relationship with me — something many clergy don’t seem able to do with their rebelling children. And second, he created a space where he and I could speak frankly about anything — including faith and doubts. Those conversations continued at other times and in other venues until his death many years later. They were among the most stimulating and loving discussions of my life. When my own children reached such a point, I did my best to emulate my father’s openness and acceptance.

In Love and Quasars, Paul Wallace sets out to engage in such frank and honest conversations. From the introduction:

Several years ago, a major survey sought to pinpoint why young people are leaving the church. One of the principal reasons had to do with science; the survey found that a large percentage of young adults agree with the statements “Churches come across as antagonistic toward science,” “Churches are out of step with the scientific world we live in,” “Christianity is anti-science,” and “[I am] turned off by the creation-versus-evolution debate.” (xiii)

In response to such questions, he sets out to describe the limitations of science and a style of faith that embraces and enhances a scientific worldview.

At times, this reader found Wallace’s approach overly simplistic. But as I read, I began to understand that Wallace’s target audience is not a clergyperson such as I who has spent many years wrestling with and reading about such issues. His target audience is the non-specialist. He makes no pretense otherwise. And he addresses them by offering up an inviting blend of science, personal story, anecdote, and humor.

Anyone who has worked with church youth groups knows that arguments about faith and doubt are not well served by unquestioned assertions. And, in large measure, Wallace avoids such traps. His training is in physics which he teaches, along with astronomy, at Agnes Scott College, a small liberal arts college affiliated with the Presbyterian Church (U.S.A). (He is also Pastor for Adult Education at First Baptist Church of Decatur, Georgia, and has taught theology at Candler and Columbia Theological Seminary.) Wallace treats science with appropriate respect and fairness, using his own life’s journey to draw the reader into his subject. He has personal experience with doubt and his treatment of such things is devoid of condescension or disdain.

That said, there are moments when he does not seem fully to support his arguments, making assertions that this reader found somewhat questionable. It appears, for example, that Wallace does not believe there to be a credible basis for morality outside of the appeal to faith. “In this sense,” he writes, “science is hollow. It will not give us morally satisfying answers to Jesus’s questions: ‘Why are we here?’ and ‘What is the purpose of beauty?’” (109). Granted, there are many questions that science simply cannot or does not attempt to answer. But most moral theologians will readily admit that one can build an ethical code without recourse to faith claims.

Perhaps most compelling about this book is Wallace’s insistence that the intersection of faith and science may be most readily found in the experience of wonder. When describing this, his writing soars. Of the quasars that he has spent a lifetime studying, he writes: “The light we detected from that one quasar … had already been traveling for over two billion years when the solar system began to form. It sailed on across the universe as life appeared and evolved, as untold waves of life and death washed across the face of the world, and as certain African hominids stood up, threw their heads back in wonder, became human, and discovered love and quasars” (120). Such passages make clear how and why Wallace “became a scientist so (he) could remain close to God” (119). And also that he is a writer in full command of his craft.

Nowhere does Wallace say that he is writing for young people alone. But, as I read, I became increasingly convinced that such is the demographic that will find this book most useful. There is a lighthearted quality to the book which I suspect many, young and old, will find compelling and winsome. If you have kept up with the many books written about the intersection of Faith and Science, this book will not break any new ground for you. If, on the other hand, you’re making your first forays into such questions, it is a solid beginning. And, if you’re looking for a book that is highly readable and pretty much pitch perfect for a youth group, Love and Quasars will be a welcome resource. 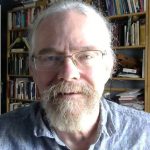 Mark Jenkins retired from The Episcopal Church in 2015. During 30 years as a parish priest, he also taught courses in comparative arts at Wayne State University and served on the Diocese of Michigan as staffer for Worship. He was a member of the “Blessings Project,” the task group that developed and wrote the Episcopal Church's liturgies for the blessing of same sex unions. He continues to serve in retirement when called upon. When not occupied with writing, he is director of the Chelsea (Michigan) Writer's Workshop and enjoys cooking and reading. He maintains a YouTube channel of sermons.