All That Will Be New: Poems
Paul Mariani

The poems in Paul Mariani’s All That Will Be New qualify as conversation pieces. Sure, a 21st-century salon organized around his latest collection would spur hearty dialogue; in some cases, a single line might sustain several gatherings.

But more than this, Mariani’s poems read like conversations he’s been conducting for years, decades even. Conversations with painters whose marks yield discovery upon each pass, with poets who tease and twist language to Mariani’s liking, with the natural features orienting his visual and spiritual life,with friends who slipped this world’s hold, and with the comrades who remain and move the poet to laughter or meditation with ease.

This beautiful back-and-forth models the rhythms of a life well-lived: charity, curiosity, fidelity. The sum of these poems-and-conversations also represents a survival strategy. Mariani tethers himself and his readers to timeless questions and boundless joys, maintaining contact with our inherent humanity when the day’s crisis sends waves and breakers crashing over us.

Some poems reference past moments of upheaval, but many know their particular time and place—after García Márquez, Mariani seeks love in the time of COVID. His speakers mock those who fail to render unto the virus its proper seriousness (“Covid Boogie”), and mourn its devastation, offering a Psalm-like prayer in which the line “We plead, dear Lord: what shall we take away from all this?” prefigures an amen which never comes (“When Reality Hits”).

“But what’s the news that stays news every day? And where shall we look to find it?” he writes. Mariani ultimately grasps for truly good gospel news, but also craves a place in any worthwhile conversation which both precedes him and will outlive him.

“And did you really think there would ever come a time when things would go as you dreamed they should?” he asks in “First Light Last.” Trusting we both know the answer, Mariani takes up a priestly role, offering ageless wonder as sacrament.

When worlds burn within and without, a sliver of the sublime can be found in the way Van Gogh’s wheat fields recall the parable of the sower. Or the way a Jules Bastien-Lepage painting unlocks something like love of neighbor: “How many times have you been stopped when you least expected by someone asking you to look at them and listen?” he writes in response.

The form and soul of these poems support each other, closer than muscle and bone. Mariani often develops his discourse through a series of expressive sentences stretching across several pages. These poems begin working on readers at a rhythmic level. You don’t have to carry every conversational cue, appreciate every literary reference, trace the crescendo of dark to light in each painting invoked. The part of us prone to swim in what Mariani calls “the re-verberating ever-vital river of language”—the part, he affirms, which makes us most ourselves—comes alive.

Sharper turns into our modern moment causes poems to sometimes grow shorter, more coarse. The tonal shift resembles turning your radio dial from a classical station to hear the country hits of yesterday and today. But it’s all music—and Mariani’s vernacular poems both lay bare present-tense stakes and heighten our craving for dialogue which doesn’t begin and end with us.

More seamless is Mariani’s coupling of the everyday and erudite. Alongside enlightened conversations with Picasso, Pound and “Williams’s Paterson Those Years Ago” comes a soft dirge for his family’s English Springer and an awed “Elegy For Our 131-Year-Old Catalpa.” Philip Levine’s recitations of Dylan Thomas, delivered “in a way that could turn even an agnostic into a believer,” holds equal weight to laughter among friends or memories of early independence behind “The Wheel, The Wheel …”

Mariani’s interest in elevating every beautiful person, place or thing grows especially poignant in the book’s final section. This often elegiac sequence pays Mariani’s departing fellow passengers the same attention as great poets and painters. In this, the poet’s calling bears resemblance to the biblical scribe: allow the Holy Spirit to tune your antennae, then receive and transcribe the poetry everywhere.

Mary Oliver passed down her instructions for living: “Pay attention / be astonished / tell about it.” He never says it so directly, but the 82-year-old Mariani pulls at a similar philosophy. Perhaps his wisdom amounts to “Instructions for Leaving Behind a Broken World,” as the title of one poem reads.

First, we must cultivate more unorthodox—and more viable—ways of seeing. Mariani offers a transcendent example with “Snow Moon Over Singer Island,” which might be a perfect poem. He describes “Black velvet darkness, tufts of clouds heading slowly up the beach, the February snow moon like the host the priest raises shining now along the solemn coast, transfiguring the Atlantic waters down below.”

Closing the poem, he prays Matthew 13 for himself and for us—that we might see the divine, not in contours of shadows, or even signs and wonders, but in its fullness: “Or is the blessed thing already there before us, you and me, and all we really need to see it are the eyes to see?”

Next, affirming Oliver, we should give speech to what we notice. “Say it! Say it while there’s time, even as your world disappears … Say it, the way Hardy or Williams would have said,” he writes in “Instructions …” Should our tongues trip, he implores us to begin with all there is to glean from the not-so-mundane: “That East Side tenement. The scalding water and the fright. The looming shadows as they trapped you, and what that cost.”

Finally, plunge into the why—and plead for the cycle to begin again, more sure of heart and full-throated. “Pray for a word, a single note, like that hungry jay outside the feeder,” the words of “Epiphany 2021” ring out. “Ask for the gift of that single note dancing outward from within the other. Three words would be enough. Three sillion-speckled words, each dancing with the other to enflesh the living Word.”

God will answer this prayer, Mariani is confident, because each earthly conversation ultimately carries us into conversation with Godself. The truest poet, the one Mariani’s work echoes, plays no favorites but keeps lifting up who and what he loves until—per the book’s title—all that will be new is woven into an epic poem begun before time. 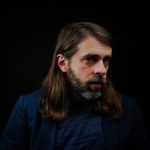 Aarik Danielsen is the arts and entertainment editor at the Columbia Daily Tribune and an instructor at the University of Missouri School of Journalism. He writes a weekly column, The (Dis)content, for Fathom Magazine. His work has been published in Image Journal, Think Christian, Christ and Pop Culture and more.