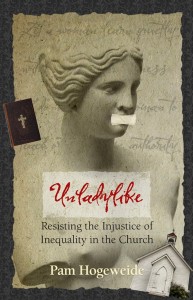 Women and Men Flourishing Together In God’s Kingdom

Unladylike: Resisting the Injustice of Inequality in the Church.

“The insistence to relegate church roles based on gender, rather than gifting has meant the minimizing of untold numbers of women solely because of their femininity.” So says writer Pam Hogeweide, both from personal experience and from hearing the stories of many other women.  Those are the stories she tells in Unladylike: Resisting the Injustice of Inequality in the Church.

Hogeweide explained how she had always tried to stay neutral regarding the issue of women teaching, preaching and leading in the church, being “ladylike” and polite for fear of causing discord in her various church communities.  Until one day she heard an inspiring teaching by a woman named Rose. Rose’s passion for equality in the church spurred on Hogeweide, with comments like “[Gender inequality] puts us in preconceived roles of what a man’s role should be and what a woman’s role should be. That doesn’t give us any room for what God has created us to be.”

She argues that the patriarchy in the church goes back to the ancient times, and that the church has interpreted that reality of patriarchy in the ancient culture as something that should be part of God’s kingdom culture. But Hogeweide disagrees. She talks about the “polite oppression” that has been at work in her life, or what she calls the “stained glass ceiling”: playing off of the “glass ceiling” metaphor in the business realm that talks about how women cannot rise to the top of the corporate ladder to illustrate how hard it is for women to be leaders in the church.

I understand what Hogeweide is talking about. Even in denominations that officially ordain women, there is still resistance by the wider church culture. For instance, at the college I attend, our main college chaplain is a woman, the first woman to be a chaplain at the school, having started three years ago. At the beginning of the semester, I interviewed to be an admissions tour guide, and I was told the following story and asked how I would respond: “Imagine you are giving a tour, and the father of a prospective student says to you, ‘So, I see the college chaplain here is a woman. Tell me about the male spiritual leadership on this campus.’” His question clearly indicates he does not think women are enough, that men, by nature of their gender, are more capable to lead the people of God. I was told that this was a real situation that had happened the week before. Unfortunately, for the sake of politeness and trying to boost enrollment numbers, it would have been inappropriate for me to argue that there was no problem with women being chaplains, and that leadership positions should be given based on position, not on gender. But Hogeweide is quite inspiring, so that maybe if it was just a colleague or friend who made such a remark, I might recall the stories of brave women (and men) speaking out against the injustice, and join them by refusing to stay silent.