Speaking the Truth in Love

Note: In this review, I have capitalized both “Black” and “White,” because that is the convention Osheta Moore chooses in her book, noting that “capitalizing Black but not White is another form of normalizing Whiteness.”

In the church, there exists a tradition of writing letters to congregations and leaders, reminding them of the truth of Scripture and illuminating kingdom-living more clearly. There is, of course, the apostle Paul, writing to the Galatians, saying, “There is neither Jew nor Gentile, neither slave nor free, nor is there male and female, for you are all one in Christ Jesus.” Centuries later, Martin Luther King Jr. alluded to Paul when he addressed church leaders in his “Letter from Birmingham Jail.” He wrote the now-ubiquitous but still powerful admonition, “I have almost reached the regrettable conclusion that the Negro’s great stumbling block in the stride toward freedom is not the White Citizens Councillor or the Ku Klux Klanner but the white moderate who is more devoted to order than to justice; who prefers a negative peace which is the absence of tension to a positive peace which is the presence of justice…”

In her second book, Dear White Peacemakers, pastor and author Osheta Moore steps into this epistolary tradition. As in her debut, Shalom Sistas, Moore’s writing is conversational and approachable. But while Shalom Sistas was a more birds-eye view of Moore’s convictions about the role women can play in the bringing of God’s shalom to the world, Dear White Peacemakers zooms in to focus specifically on the issues of racism and racial reconciliation. Her audience, too, is more specific, as the title reveals. Moore is writing a letter to White Christians, and even more specifically, those who desire to be peacemakers. She addresses that audience with intense care and compassion.

As a White woman who desires to be anti-racist, I often desire to set aside my own feelings. In fact, many anti-racist activists and advocates would argue that indeed, the emotions of White people are not at all the point. None of us (White, aspiring peacemakers) want to exhibit the White fragility we’ve read about, and many other writers would tell us in understandably strong language to set our feelings aside, decenter ourselves, and get to work.

That is not the approach Moore takes. No doubt, I imagine many will find her position too accommodating, too gentle, too passive––but that would be too simplistic of a reading of the book. When you dive in, you discover that while Moore remains stalwart in her desire to offer White people empathy and patience, she also will not let White supremacy as a system or White Christians as individuals off the hook. Racism must be met, she posits, with both “grit and grace.” In walking this line so well, she offers a singular and unique contribution to anti-racism literature.

It strikes me that Moore is uniquely qualified to explore these ideas. She is a Black woman, married to a White man, and raising three biracial children. She has lived across the country in New Orleans, Boston, and Minneapolis, giving her a well-rounded view of the ways racism and inequity manifest in our country. She is also a pastor and preacher, committed to living out the way of Jesus in practical, tangible ways and not merely in abstraction. Her various intersectionalities make her voice one worth listening to.

She didn’t come to her position without struggle. Part 1, “Wade in the Water” (each of the book’s four parts are titled with the name of an African-American spiritual), begins with a story of the time when Moore led a group of White people on a pilgrimage to learn about racism in the American south. She was exhausted by the effort, frustrated by the lack of passion and commitment her companions seemed to demonstrate, and wondering what her next step should be. “I could prepare a discussion time that would make them feel the weight of the shame of their White skin. I could sneer ‘privilege’ like an accusation and proclaim them ‘fragile’ as if it were a death sentence…And they, wanting to be ‘woke,’ wanting not to seem like racists, wanting to be the ally and not the problem, would take it. They would take in my violence.”

But the following day, Moore had an encounter with a woman on the trip who was in need of comfort and assurance, and she was convinced of her role as “a Beloved daughter tasked to call in my sister from the cold of self-hatred.”  Moore asks the reader, “This is the kind of love Jesus showed us on the cross, did he not?”

In Moore’s words, we find an insistence on compassion, but she does not compromise Truth: White people are created in the image of God, Black people are created in the image of God, racism is evil, and non-violence is key. To leave White supremacy behind, she argues, we must recognize the ways it dehumanizes both White people and people of color. Furthermore, all Christians–Black or White–must engage our anti-racism work in the way of Jesus. She doesn’t minimize or overlook the challenging, counter-cultural nature of this approach.

Dear White Peacemakers is not a history lesson or an academic treatise, and to the best of my knowledge, entirely unique in tone and focus. The book is approachable for any who are just dipping their toes into the anti-racism waters; no doubt, they will find both comfort and challenge in these pages. At the same time, those who have done more reading and learning about these topics will find much to appreciate here. Moore expertly draws on memoir, Scripture, theology, and current events. In Part II (“There is a Balm in Gilead”), for example, she weaves together personal reflection, the Beatitudes, and a transcript of George Floyd’s last words. Every chapter ends with a breath prayer.

In his letter to the church at Ephesus, the apostle Paul makes an appeal for unity between Jews and Gentiles. “Be completely humble and gentle; be patient, bearing with one another in love,” he writes. “Make every effort to keep the unity of the Spirit through the bond of peace,” (Ephesians 4:2-3). To do so, he says, is the path toward a mature body of Christ. In verse 15, he goes on to say that by “speaking the truth in love, we will grow to become in every respect the mature body of him who is the head, that is, Christ.”

Dear White Peacemakers embodies Paul’s words. Osheta Moore speaks the truth in love, and in so doing, she invites White Christians to embody the peacemaking, anti-racist lives to which we are called. 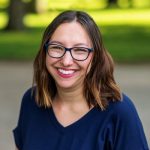 Lindsey Cornett is a loud talker and lover of the written word who lives in downtown Indianapolis with her scientist husband and three young kids. In both writing and life, she explores the intersections of faith, family, and creativity. She is a co-founder of The Drafting Desk, a email newsletter of soulful encouragement for recovering perfectionists. If her kids aren't demanding to be held, she's probably carrying a pen, a book, or a coffee. Her writing has been featured at Coffee + Crumbs, Motherly, and (in)courage. Connect with her on Instagram.