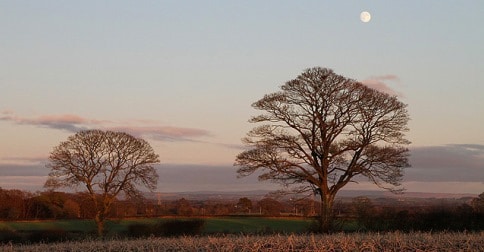 As we are now well-entrenched in November, here are eight classic poems about this autumn month…

The landscape sleeps in mist from morn till noon;
And, if the sun looks through, ’tis with a face
Beamless and pale and round, as if the moon,
When done the journey of her nightly race,
Had found him sleeping, and supplied his place.

For days the shepherds in the fields may be,
Nor mark a patch of sky— blindfold they trace,
The plains, that seem without a bush or tree,
Whistling aloud by guess, to flocks they cannot see.

The timid hare seems half its fears to lose,
Crouching and sleeping ‘neath its grassy lair,
And scarcely startles, tho’ the shepherd goes
Close by its home, and dogs are barking there;
The wild colt only turns around to stare
At passer by, then knaps his hide again;
And moody crows beside the road forbear
To fly, tho’ pelted by the passing swain;
Thus day seems turn’d to night, and tries to wake in vain.

The owlet leaves her hiding-place at noon,
And flaps her grey wings in the doubling light;
The hoarse jay screams to see her out so soon,
And small birds chirp and startle with affright;
Much doth it scare the superstitious wight,
Who dreams of sorry luck, and sore dismay;
While cow-boys think the day a dream of night,
And oft grow fearful on their lonely way,
Fancying that ghosts may wake, and leave their graves by day.

Yet but awhile the slumbering weather flings
Its murky prison round— then winds wake loud;
With sudden stir the startled forest sings
Winter’s returning song— cloud races cloud,
And the horizon throws away its shroud,
Sweeping a stretching circle from the eye;
Storms upon storms in quick succession crowd,
And o’er the sameness of the purple sky
Heaven paints, with hurried hand, wild hues of every dye.

At length it comes along the forest oaks,
With sobbing ebbs, and uproar gathering high;
The scared, hoarse raven on its cradle croaks,
And stockdove-flocks in hurried terrors fly,
While the blue hawk hangs o’er them in the sky.
—
The hedger hastens from the storm begun,
To seek a shelter that may keep him dry;
And foresters low bent, the wind to shun,
Scarce hear amid the strife the poacher’s muttering gun.

The ploughman hears its humming rage begin,
And hies for shelter from his naked toil;
Buttoning his doublet closer to his chin,
He bends and scampers o’er the elting soil,
While clouds above him in wild fury boil,
And winds drive heavily the beating rain;
He turns his back to catch his breath awhile,
Then ekes his speed and faces it again,
To seek the shepherd’s hut beside the rushy plain.

The boy, that scareth from the spiry wheat
The melancholy crow—in hurry weaves,
Beneath an ivied tree, his sheltering seat,
Of rushy flags and sedges tied in sheaves,
Or from the field a shock of stubble thieves.

There he doth dithering sit, and entertain
His eyes with marking the storm-driven leaves;
Oft spying nests where he spring eggs had ta’en,
And wishing in his heart ’twas summer-time again.

Thus wears the month along, in checker’d moods,
Sunshine and shadows, tempests loud, and calms;
One hour dies silent o’er the sleepy woods,
The next wakes loud with unexpected storms;
A dreary nakedness the field deforms—
Yet many a rural sound, and rural sight,
Lives in the village still about the farms,
Where toil’s rude uproar hums from morn till night
Noises, in which the ears of Industry delight.

At length the stir of rural labour’s still,
And Industry her care awhile forgoes;
When Winter comes in earnest to fulfil
His yearly task, at bleak November’s close,
And stops the plough, and hides the field in snows;
When frost locks up the stream in chill delay,
And mellows on the hedge the jetty sloes,
For little birds—then Toil hath time for play,
And nought but threshers’ flails awake the dreary day.