Whenever I hear the word “doubt,” inevitably I picture a wimpled Meryl Streep crying out, “I have doubts!” in John Patrick Shanley’s 2008 film Doubt. As she holds a rosary in her hand, Streep’s quavering voice captures the content of a Catholic loss of belief within the rhythms of liturgy and ritual, a crisis of doubt spawned by hierarchical scandal or by the display of the church in all its grandeur while its congregants toil through the burdens of each day. It is the sound of discovering something you thought was there only to find that it isn’t.

Nick Ripatrazone’s Longing for an Absent God brings “doubt” and “faith” back into our critical conversations about literature. His work is needed in an age of increasing crises when it seems we all run on the fumes of belief in the face of tragedy. Ripatrazone looks at the “great American” novelists of the 20th century and identifies a spectrum ranging from believers to more culturally informed authors like Don DeLillo and Thomas Pynchon.

But first, some notes of clarification. As I quickly discovered, when Ripatrazone uses the word “faith” in the book’s title, he means “Catholic,” narrowing his field to the likes of Ron Hansen, Alice McDermott, and, of course, Flannery O’Connor. Whether this lack of clarity was a marketing decision or an oversight, I was disappointed to see that almost no effort is taken to compare Catholic doubt with the salvation anxiety of Protestant/Reformed writers like Marilynne Robinson, Nathaniel Hawthorne, or even the mystic concerns of Orthodox writers like Dostoevsky or contemporary poets Scott Cairns or Nick Samaras, to name a few. Liturgical language and rhythms span denominations and to not reach out beyond the Catholic Church, even simply to compare or help define how exactly Catholic faith and doubt are distinct, was a missed opportunity.

The second caveat is that Ripatrazone limits himself to “Great American fiction” when an exploration that crosses genres would better enhance his argument. I think, for example, of Pulitzer prize-winning poet Frank Bidart, whose work as a gay poet emerging from a Catholic upbringing of guilt, where he was taught to wrestle with his flesh, is an excellent example of the kind of doubt Ripatrazone is trying to explore. Plus, the rhythms of poetry would echo a major line of argument that Ripatrazone makes—that Catholic liturgy, especially pre-Vatican II Latinate liturgy, shapes the syntax and atmosphere of writers like DeLillo or Toni Morrison. Ripatrazone has made a name for himself as a poetry critic for The Millions, and the ways he routinely sees poets wrestle with spiritual language is always riveting (see, for example, his “Crooked Lines of God” review of Wiman’s Survival is a Style). Perhaps this is work for his next book project, but the omission of poetry as a dialogue partner with fiction is sorely missed here.

In his book, Ripatrazone argues that the 20th century cultural and political landscape created a difficult atmosphere for Catholic writers. Persecution forced Catholic writers to either double down with belief and “Catholic sincerity” or to abandon believe and embrace Catholicism as “ironic symbol” (13, 10). For the first category, Ripatrazone selects someone like Ron Hansen (who, oddly, figures only in the introduction of the book) and his book Mariette in Ecstasy, a genre-bending novel about nuns who wrestle with doubt when a young postulant claiming to experience miracles enters their midst. The novel is perfect for Ripatrazone’s project in that it channels both Catholic language and doubt as its central theme. For the second category of “ironic symbol,” we get writers like DeLillo and Pynchon. Ripatrazone has much to say about DeLillo and his Jesuit education that runs through his work, but his chapter on Pynchon stretches his project’s claims. There are moments elsewhere in Longing for an Absent God when Ripatrazone chooses to emphasize an author or a scene to a degree where what he calls “Catholic” may simply be spiritual, uncanny, or mysterious. Is that an imprint of Catholic upbringing and language or does it simply reflect the 20th century’s fetish for the unexplained and exisistential, the insertion of the uncanny into a realist world? It’s hard to say.

Flannery O’Connor, of course, figures heavily in the book, as she should, but reading about O’Connor in the wake of conversations this summer between Paul Elie and other O’Connor scholars regarding O’Connor’s apparent racism throws her placement in our literary canon in doubt. Intriguing is the question of what happens when we lose faith in the writers we hoped represent true belief, or those who, as Ripatrazone says of O’Connor “rescued dogma.” Of course, Longing for an Absent God was written and published long before these conversations started happening, but this development adds a new layer to the book.

That said, Ripatrazone clearly preferences writers of “lived belief” like Andre Dubus and O’Connor over those like DeLillo and Pynchon. But the strongest chapters of criticism occur when Ripatrazone ventures out to writers often not thought of as Catholic—Toni Morrison and Louise Erdrich—rather than the typical nostalgically Catholic canon (or the white male canon of DeLillo, Pynchon, or Cormac McCarthy, the last of which has had so much recent criticism written about him and the influx of faith, sin, and human nature in his work, it almost seems there should be a moratorium).

By examining Morrison and Erdrich, Ripatrazone takes us to a land we should have been all along. Rather than vague comments about the power of Latin mass and liturgy, Catholic faith and doubt become embodied and specific in the work of Morrison and Erdrich. For Morrison, who was raised Catholic but humbly admits she wrestled with becoming lapsed, the Catholic “religion calls for extremes: solemnity, joy, silence, and exhortation” (121). Thus, as Ripatrazone observes, Morrison “appears intent on forcing us to look at embodied black pain… to see the body on the cross; to see its blood, its cuts, its sweat” (126). We see this in the character of Sethe in Beloved whose back is a “tree” of scars from being whipped: “Scarred inside and out, she is the living embodiment of bearing witness.” (129)

If Morrison’s writing is representational of the “Passion,” Erdrich’s power lies in her syncretism between Catholic faith and the Ojibwe and Chippewa beliefs of her characters. The Catholic is colonial, creeping into the lives of Erdrich’s characters, and yet its mysticism and power is on par with indigenous belief. This “collision” between “Catholicism and ethnicity” is generative for Erdrich, and Ripatrazone’s readings of her works deftly explore a writer not often thought of as Catholic.

Though he limits himself to American fiction, Catholic writers like Graham Greene appear at times in Longing for an Absent God to trace the tradition of faith and doubt in Catholic fiction. But if geographical boundaries were not that important in Ripatrazone’s book, he would have found much material outside the typical American and British milieu: from Chimamanda Ngozi Adichie’s celebrated novel Purple Hibiscus to Arundhati Roy’s The God of Small Things or even Shushaku Endo’s Silence, though perhaps over-examined in recent memory. These are major works of fiction where doubt figures heavily in conversation with Catholic belief, and like most novels coming out of the postcolonial world, wrestling with Catholic doctrine and liturgy also means wrestling with empire and nationhood. Religious doubt, then, becomes wrapped up in so many different things—the emergence of the black and brown individual in a history of white control and the question of how Catholic belief can become distinctly African or South Asian as we emerge into a new century.

Ripatrazone’s Longing for an Absent God is certainly worth reading, but it also represents the sometimes navel-gazing nostalgia of much of Christian scholarship. When Ripatrazone ventures out from the canon, he is at his best, and that perhaps echoes the border-stalking tendencies of some of his favorite writers. “Saints are like that, I think. Elusive. Other. Upsetting,” Ron Hansen writes in Mariette in Ecstasy. Ripatrazone observes, “A character who believes in God is strange, mad, or a liar. Sometimes all three” (10). As Ripatrazone shows us, the pendulum between faith and doubt is less a binary and more an exchange. We need all these voices in conversation to show us how we are to live our lives. 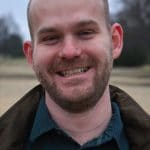 Aaron Brown is the author of Acacia Road, winner of the 2016 Gerald Cable Book Award (Silverfish Review Press). He has published work in Image, World Literature Today, Tupelo Quarterly, Waxwing, and Transition, among others. Brown grew up in Chad and now lives in Texas, where he is an assistant professor of English at LeTourneau University. Find him online at: www.aaronbrownwriter.com