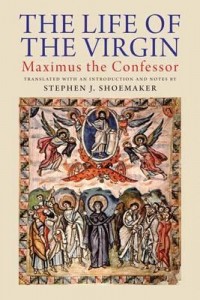 Peerless in Her Tenacious Presence.

The Life of the Virgin

Translated for the first time into English, The Life of the Virgin is the earliest complete hagiographical biography of Mary the mother of Jesus (1). That fact alone commends and justifies the excellent work Stephen J. Shoemaker has completed. What is more, The Life was almost certainly authored by the currently acclaimed (and justly so) Maximus the Confessor, a towering theological giant for Christian traditions East and West. Shoemaker makes the authorial case cogently in his “Introduction” to the work, citing the “unanimous” attribution of the manuscript to Maximus, highlighting several internal features of the text that place it in the early-mid 7th century (Maximus’s time), pointing to circumstantial evidence in Maximus’s historical-biographical context that contribute to the likelihood of his composing such a work, and even deferring to the seasoned intuition of Hans Urs von Balthasar, who was certainly no stranger to the thought-world of Maximus: for Balthasar, in The Life one finds “a Maximus, who is entirely new but recognizable,…. And is much more accessible than in most of his theological works” (12). Providing such a different portrait of Maximus, then, also commends Shoemaker’s timely translation.

The only extant manuscripts of Maximus’s Life are in Old Georgian, translated from the Greek by Euthymius the Hagiorite atop Mount Athos in the 11th century. Other than a French critical edition and translation published in 1986 by Michel van Esbroek, Shoemaker had only the remaining eleven Old Georgian manuscripts from which to produce his translation and compose his notes (2-3). Since I am no expert in Old Georgian, I cannot speak to the accuracy of Shoemaker’s emendations and corrections of Esbroek’s French version, but both the brevity and clarity of Shoemaker’s notes evince tedious scrutiny and linguistic acumen. The scholarly labor involved in producing this English translation, particularly in that it requires such expert knowledge of a rather obscure language, puts us all in Shoemaker’s debt.

But such a labor is, as Shoemaker’s tone intimates, more than a display of scholarly ability. It is a labor of love that shares the aim of the work itself – to cultivate devotion to and emulation of Mary, Theotokos, the Mother of God. Shoemaker’s text is divided into nine clear chapters with a total of 134 sections. Within these pages Maximus the Confessor’s focus is steadfast, a focus which is punctuated by the rushing cascade of laudatory names he heaps upon the Virgin at both the beginning and the end of the work: “Hear this, all you nations, and take heed…let us hymn, praise, and glorify the all-holy, immaculate, and most blessed Theotokos and ever-virgin Mary,” trumpets Maximus in the opening lines. She is the “throne of the king more exalted than the cherubim and seraphim, the Mother of Christ our God, the city of God…the temple of the Holy Spirit, the source of living water, the Paradise of the tree of life” (36, §1). As such, Mary is eminently worthy of our praise, though “even if all the nations of humanity came together, they would not be able to attain the worthiness of her praise and glory” (37, §1).

A good bit of Maximus’s account of Mary’s life is familiar, since much of it is drawn from the canonical Gospels. However, he does not shy away from other, less conspicuous sources such as the Protevangelium of James, earlier homilies on various parts of Mary’s life, the 4th-century “Six Books” compilation on Mary’s Dormition, and even spiritually inspired Old Testament texts such as the Psalms (interestingly, Maximus vehemently rejects the value of the Infancy Gospel of Thomas, 89, §62). In the latter he finds a hermeneutical volatility which allows for spiritual interpretations of Scripture that prophetically testify to Mary’s virtue, goodness, knowledge, and worthiness. In one place, for instance, he notes that a given text (Psalm 44) is typically interpreted as speaking of the Church, but hastens to add that “there is nevertheless nothing at all that impedes understanding [these texts] as being about the holy Theotokos. For words spoken by the Holy Spirit should not be understood only in one way but in many ways, for they are a treasure house of good things” (41, §6).

Maximus’s varying sources allow him to knit together a unified narrative that at once follows the canonical books while leaving room for a plethora of details not found in those books: that Mary’s parents, Anna and Joachim, were barren and so Mary’s birth was miraculous (38, §3); that Mary was dedicated to the Temple from birth and grew up in its courts (39-45); that an event occurred in the Temple one night that foreshadowed the Annunciation, wherein Mary saw a brilliant light and heard a voice say, “Mary, from you my Son will be born” (46, §14); that Joseph was a 70-year old man with grown children when betrothed to the ever-virgin Mary (48, §17); that Mary’s delivery of the Christ-child, being a reversal of the Eve’s curse, inflicted no child-bearing pains (53, §22); that the “star” the magi followed to the Nativity was no star at all, but a “rational power” that was “guiding them deliberately by the power and command of the creator” (67, §36); that Mary was in fact the first witness to the Resurrection of her Son (119, §92); and practically the entire narrative from the Resurrection to Mary’s Dormition, a spectacular event that includes the translation of Mary’s soul by Jesus into heaven, surrounded by all the apostles and myriads of angels (119-148).

Maximus’s hagiographical account never wavers from its intensely spiritual aim of cultivating true and pious devotion toward the Son and his Mother. But Mary herself is not just an object of praise and glory, though she is undoubtedly that. In Maximus’s retelling she becomes the preeminent disciple of Christ, a leader of the apostles, the hope and courage of all believers, and so a model and source of the divine life lived on earth. “Wherever [Jesus] went,” says Maximus, “she went with him, and she was considered the life and the light of his eyes and soul, going with him and listening to his words” (96, §68). And when the immense suffering of Christ’s Passion occurred, “I would say,” asserts Maximus, “even though it is a bold statement, that [Mary] suffered more than him and endured sorrows of the heart: for he was God and Lord of all things, and he willingly endured suffering in the flesh. But she possessed the frailty of a human being and a woman and was filled with such love toward her beloved and desirable son” (101, §73). Moreover, Mary is peerless in her tenacious presence through every single moment of Christ’s agonizing death, never leaving the foot of the cross, sleeping and praying ceaselessly at the tomb, and eventually becoming the first witness of the Resurrection. Indeed, her steadfast devotion at every moment of Christ’s life leads directly to her glorification, aside her Son (119, §92). Thus after Christ’s ascension, “the holy mother of Christ was the model and leader of every good activity for men and for women through the grace and support of her glorious king and son.” Amazingly, she even “instructed the holy apostles in fasting and prayer,” becoming the “steward on [Christ’s] behalf and teacher and queen of all the believers and those who hope in his name, men and women,” performed miracles and an abundance of good works from her dwelling in Jerusalem (John’s house); so she “became greater than all, as the sun is brighter than the stars (123, §96; 129, §102). And at her miraculous death, which like Christ’s birth was devoid of the pain of the curse, all the apostles – including John, Peter and Paul – along with the angels, gathered and honored Mary as she was ushered by Jesus himself to her place at his right hand (140-1, §§116-7).

It is because of these astounding accolades that the Virgin, Theotokos, Mother of God, has become and remains – next to Christ – the ever-present intercessor for Christians before God. This is granted to her by her Son, and she declares it to those gathered at her Dormition: “And when I stand before him, I will not cease to pray and intercede on behalf of you and all Christians and the entire world, so that the one who sees mercy as necessary will have mercy on all believers and make them steadfast and guide them on the way of life” (132, §106). For she is the “dwelling place of the Holy Spirit, queen of all things, urn of gold receiving the manna, rod that sprouted from the root of Jesse…table of life, temple of light, ark of holiness, source of immortality, intellectual Paradise, cloud of light, unwavering pillar of brilliance…gate of God, which he alone passed through and it remained closed…all-holy mountain, Eden of the second Adam…mother of God, immaculate Virgin, most blessed Theotokos and ever-virgin Mary” (157, §132). All this because, “above all,” exclaims Maximus in direct address, “you are…the imitator of your son and God, and so through your intercessions with him, the gracious and benevolent one spreads forth his mercies and delights even more upon us” (156, §130). Because she is the unparalleled model of her Son, she is the unparalleled intercessor with Him – and because of these things, she is most worthy of praise. Shoemaker’s wonderful edition of Maximus the Confessor’s The Life of the Virgin, therefore, furthers Maximus’s own goal: to inculcate devotion and gratitude toward the Mother of God.