A Nuanced Study of Human Nature

This book is the second in author Mary VanderGoot’s trilogy about the life of Maggie Barnes. In the first book, Broken Glass, an aging Maggie reflects on her life as it eases toward its end. The story portrays both the durability and the fragility of life—like a water glass that is intact and reliable for decades but then, when its time comes to fall, it breaks and ceases to be.

A Certain Slant takes place after Maggie’s death. She has left her journals to her son Rowland. A successful academic and loving father with a substantial circle of relatives and acquaintances, Rowland is nevertheless a lonely man. He is plagued by an amorphous yet persistent sense of alienation from others. A grown man suffering the immaturity of self-preoccupation, Rowland repeatedly tries to create friendships, “little bubbles of risky togetherness” as he calls them, through an immoderate candor, a lack of discretion, that in the end amounts to little more than gossip. True intimacy escapes him.

In his mother’s journals, Rowland senses the opportunity to come to know her better than he knew her in life. He hopes that he will thereby arrive at a more profound and certain knowledge of himself. Armed with those aspirations, Rowland believes his mother’s journals should reveal all her secrets. As her son, he believes he has a right to the whole truth and nothing but the truth about his mother’s life.

When he realizes that Maggie does not tell all, he turns to her lifelong friend Alethea, whom he has known since childhood, to help fill in the gaps. There follows a fraught yet increasingly fond relationship, a learning together about Maggie and about each other, as they read and discuss Maggie’s journals. Though Alethea realizes, as her relationship with Rowland develops, that he has much to teach her, the older woman is the sage.

Rowland’s quest for greater understanding is without direction until Alethea, unintentionally but inexorably, becomes his guide. She leads him to several key insights. One is the value of discretion. As Alethea expresses it, “there is a deep inner space that is ours to keep or to share as we see fit….no one has a right to demand it.” In Maggie’s journals and in conversations with Alethea, Rowland discovers many instances of his mother’s having kept important truths to herself, either because she believed the information belonged to her alone, or because she judged it wiser not to disturb the privacy of the dead or to disrupt the beliefs of the living. Rowland discovers, for example, that the image his mother allowed him to carry of his grandfather (after whom he was named) was based on a fundamentally incomplete idea of what kind of man he was. Yet, Rowland’s inner connection to his grandfather was an important aid to his growth into stable adulthood. Maggie knew that people must cobble together their own set of memories and fashion their own identity. She knew, from her own experience and from all of the people she loved, that an identity built from elements that include historical inaccuracies about one’s predecessors is not, because of that, a false identity.

Another insight that Rowland comes to with Alethea’s help is the complexity of truth and the incompleteness of our knowledge. No one will ever know the “whole truth,” even about him- or herself, and especially about other people. But that does not mean that what we do know is not true. In telling one’s story with “a certain slant,” from one’s own corner of experience, one takes possession of real truth, though it is too multi-faceted to be encapsulated by any single perspective.

One overarching theme of this nuanced study of human nature is the presence of dignity in ordinariness. Here it must be said that, although Rowland is the main character and his relationship with Alethea a central focus, this is very much a fitting second novel in the Maggie Smith trilogy. The figure of Maggie hovers over the entire story, bestowing a brooding, transcendent dignity upon it. In life, Maggie was a solid, if imperfect, rock whose steadfast love, though externally unremarkable, helped her children, grandchildren and friends build meaningful lives. Now, even in death, Maggie, in bequeathing her journals to her son, blesses him with a level of self-understanding and affinity with others that had always eluded him.

A fascinating aspect of this novel is that the book, while exploring its characters’ inner lives, breaks so many of the myths of today’s pervasively therapeutic culture. The main reason for that is its insight that one best gains self-knowledge by focusing on others in relationship. The depiction of how Rowland comes into his own in growing close to Alethea, and through their talks about the life and loved ones of Maggie, is the most moving part of the story. The novel features many other well-drawn characters as well, who form the rich web of connections that make Rowland who he is and Maggie who she was: Rowland’s vulnerable daughter Meredith, his estranged ex-wife Andrea, his quirky siblings (two sisters and a twin brother), his late father (Maggie’s husband), and his ambivalent love interest Polly are the main examples.

This novel does what I believe all creative art must do: it conveys an intuitive sense about what it’s like to be a human being. That is what connects the reader to the author and her characters. Though A Certain Slant stands alone as a complete work, its portrayal of the dignity of the ordinary lives of Maggie and her loved ones ties it closely to Broken Glass. We can look forward to the third book in the trilogy, Phantom Fathers, which is set to come out in 2022. 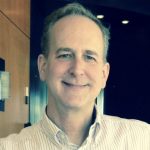 A U.S. diplomat from 1992-2012, Todd Huizinga is the senior fellow for Europe of the Religious Freedom Institute in Washington, D.C. He is the author of The New Totalitarian Temptation: Global Governance and the Crisis of Democracy in Europe. His articles and essays have appeared in publications in the United States, Germany, the Netherlands, Hungary, and Australia.