A Nourishing, Abundant Presence
to the Hungry World

The Meal That Reconnects:
Eucharistic Eating and the Global Food Crisis
Mary McGann

Over the past decade, there is a renewed interest in the theology and liturgy of the Eucharist, especially within Evangelicalism. Part of this stems from a dissatisfaction of evangelicals to the impoverished theology and liturgy of the Eucharist that emerged from the Seeker Movement of the 1980s and 1990s, and is still the majority view within many churches.

Theologians, pastors, and lay people are reimaging the formative aspect of the Eucharist. They are seeing it as more than a “me and Jesus” moment—a somber, reflective moment for me to recommit my ways to Jesus only after I have made sure to examine myself. In this new imagination the Table is the place where we come as a broken but redeemed community to be nourished by Jesus, so that we as a community can be a redemptive and nourishing presence to others, starting in the church, but extending to the community and the world as well.

The Table becomes the model for how the church, individually and corporately, relate to the world. However, what has been sometimes missing or overlooked is the prophetic nature of the Eucharist to speak out against the food injustices of the world, from hunger to modern agribusiness practices. Mary McGann seeks to rectify this issue in The Meal that Reconnects: Eucharistic Eating and the Global Food Crisis. She writes in the Preface, “How can eucharistic eating create an alternative paradigm and effect a prophetic healing of relationships with the Earth’s abundance and all who share it? How can eucharistic practice strengthen relationships of justice, solidarity, and reciprocity between human communities and the rest of the web of life?” (xi) If food is governed by and oriented toward relationships, then as Christians, we must continually remind ourselves of the foundational aspect the Eucharist plays in our relationship to food.

McGann’s book is divided into three parts. Part 1 lays the foundation for Parts 2 and 3, reminding readers of the profound nature of meals, especially as narrated by the Gospels and the early church. Jesus’s meal practices ushered in a new economy based not on social status, but on the personal dignity of every individual, especially the least of these. McGann reminds readers that as the early church continued the practices of Jesus, they looked at the totality of Jesus’s ministry, and not just the memorialization of the last supper. Through these practices the early church was a prophetic witness to the divisive and hierarchical practices of the Jewish and Greco-Roman culture.

Part 2 examines how modern agri-business has contributed to a broken system that only exacerbates injustices in our relationship with the hungry and Earth itself. In this new modern agri-business culture, McGann writes, “Food priorities such as taste, nutrition, variety, wholeness, and ripeness have been sacrificed to the economic goals of increased productivity, efficiency, and ultimately corporate profit” (69). Because of this sacrifice everything about our relationship to food, from the soil, to seeds, to labor, to eating have been upended. As McGann examines the ecological and the human cost of this reality, she always returns to the Eucharist, making explicit why these issues should matter to Christians who gather around the Table. Most importantly, rather than just harking on the injustices of the modern, corporate-based food system, McGann concludes Part 2 with her vision of an alternative model, rooted in five practices—small in scale, locally based, organically sustained, regenerative of Earth’s resources, and rooted in justice.

In Part 3, McGann returns to the eucharistic table to develop a robust theology in light of Parts 1 and 2, and informed by Pope Francis’ encyclical Laudato Sí. McGann writes, “If Christian Eucharist is to be a ‘meal that reconnects,’ that reweaves broken relationships and forms communities for prophetic action, communities must reclaim and revitalize the foundational character of Eucharist as meal” (150). In chapter 8, she focuses on five aspects of the Eucharist that need to be reconsidered in order to more fruitfully speak to the issues at stake: an assembling community, a common table, a common loaf and cup, a table of abundance, and thanksgiving for Earth and all creation. Not familiar with Catholic Eucharistic theology, I appreciated her willingness to push against some deeply engrained practices of the Catholic Church. In chapter 9, McGann expands her focus to examine how the eucharistic table informs the church’s posture to the rest of the world. Jesus’s meals were not simply niceties on the way to the “real” work of the cross, rather they inaugurated a new moral economy defined not by productivity, efficiency, or profit, but rooted in and sustained by egalitarianism, inclusion, and a deep acknowledgement of the abundance of God’s creation. According to McGann, this chapter is “meant to revitalize the connection between eucharistic eating and the social, economic, and ecological forces that shape our local-global society, creating a moral force for goodness, justice, and planetary well-being” (178).

McGann’s book is a welcome addition to the growing conversation centered on the Christian’s holistic relationship to food. Her theology is deeply informed by the Eucharist and how it shapes us as believers to the world, and in the case of her book the complex ecological and economic issues surrounding the global food crisis.

Where I struggle with her book and some of the other literature related to food and faith is the stance as it relates to the corporate agri-business practices. At times, to use the words of David Fitch, there seems to be an “enemy-making machine” at work to paint current large-scale agricultural practices as all bad. There seems to be an either-or mentality in some of the work, either we fall prey to their practices, or we support and encourage the local only. But if we as believers are formed by a radically inclusive table, is there room for these farmers and other businesspeople? Is there a way in which farmers, many of whom are Bible-believing men and women, to join and work with these ideas to creatively solve a problem we should all care deeply about? For at the heart of McGann’s book is the challenge to the church to reclaim the prophetic message of the eucharistic table. A message centered on inclusion, equality, and justice for everyone.

In this important, on-going dialogue, I pray that Christians wherever they stand on these issues do not become so entrenched that “the table becomes a source of distinctions, of establishing prestige, of marking hierarchies, and of keeping the community divided into those with power and those without.” Rather may we all come to the table to be nourished so that we may be a nourishing, abundant presence to the hungry world. 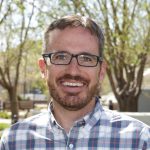 Andrew Camp has an MA in Spiritual Formation and Soul Care from Talbot Seminary. He is also a professionally trained chef, most recently as the sous chef at Silver Restaurant in Park City, Utah until it closed in 2015. Since then, he has served as the Spiritual Growth Pastor at Mountain Life Church in Park City. He and his wife, Claire, live just outside of Park City with their two young daughters, Hazelle and Hannah.

← Theology of the First Millenni ...