Walking Together Toward Jesus

“Christianity has an image problem,” writes David Kinnaman and Gabe Lyons. And though written in 2007 in their book entitled UNchristian, I’m afraid this statement still rings true. I grow weary of reading how people both inside and outside the church have been wounded by so-called Christians. I continue to be broken over the number of people who walk away from church because they feel misunderstood, condemned, and unloved. So when I encountered Mark D. Baker’s book entitled Centered-Set Church: Discipleship and Community Without Judgmentalism, the Without Judgmentalism portion of his title grabbed my attention.

The question which Baker has us think about throughout his book is whether following Jesus is about a line we cross or a direction we face. True; following Jesus does mean moving in a new direction and will, therefore, involve making some hard decisions at times, but to be centered-set, as Baker wants churches to become, is more about a life-long journey towards Jesus rather than just overcoming some sins that we categorize as worse than others.

Though Baker has previously written about the concepts found here in Centered-Set Church (see Religious No More), it was his encounter with the work of Paul Hiebert that gave him further definition and language in describing churches as being either “bounded, fuzzy, or centered” (17). Understanding these three components and their implications and/or deterrences is what comprises the pages of this book.

As Baker has discovered, some churches draw lines– that is, set up rules– and if you are on the inside of those lines, then all is good. But if not, then you are looked down upon. These churches are called “bounded.” This is not to say that guidelines are not important in determining what is acceptable or true, but in a bounded church, they “use those lines to separate and categorize people in a judgmental way” (26). Consider the lines drawn between Jews and Gentiles in the first century. Were Gentiles truly Christ followers if they didn’t follow certain dietary restrictions? What about circumcision? Such were the lines drawn by Jews yet Paul writes emphatically, especially in Galatians, that such rules were missing the mark.

As you might expect, there are those who have pushed back against these bounded churches due to their tendency to exclude others. These churches are “fuzzy.” They erase the lines. It might appear that because fuzzy churches dispense of those barriers that obstruct one from being on the inside that they would be places of real healing. But this is not the case. Baker writes of one person in a fuzzy church lamenting: “At a point when I most needed direction and discipleship, I instead experienced a community of people lost and wandering. Metaphorically, many of us jumped off bridges while the rest of us watched” (37).

As mentioned above, for Baker, the church must become a centered-set group. By this he means that “the group is created by defining a center and observing people’s relationship with the center” (23). Again, it’s not about a line you cross per se, but a direction you face. Naturally, there will be some who are further from the center than others, but regardless, like everyone else, they are on a pilgrimage. This is a key element in understanding being centered-set. “A bounded church demands people move across the line, but then it becomes fairly static—you are in, not out,” writes Baker. “A fuzzy church is fuzzy; it is difficult to call for movement or change. A centered church, however, invites people on a journey. It is not static because we have not yet arrived” (109).

The center is no less than Jesus. However, Baker wants to define who this Jesus is “because our conceptions about God will influence whether we do church in a bounded, fuzzy, or centered way, and the paradigm of our church will influence how we view God” (61). If one grew up in a strict fundamentalist church then naturally, one might see God as one who is harsh and demanding. So Baker is adamant that we see God as the father in Luke 15 who not only runs after the son who squanders everything, but also engages the son who stays home and keeps the rules yet is disgruntled over the amazing grace given to his runaway brother.

The strength of Centered-Set Church comes from its practicality. Granted, Baker devotes chapters to the theological, but as good theology always does, it leads one to the trenches– that is, the everyday life of everyday folks who lead and serve in everyday churches. So Baker engages in everything from preaching to prison ministry to guide his readers to see the effects of a church becoming centered. And in the various ministries he lists, he leans heavily on the insight of various practitioners in the field (just glance at how many footnotes are cited from emails from pastors and others).

Two specific praxis points of being centered grabbed my attention. First involves the language we use to exhort others. I teach the Bible often and so Baker’s encouragement is to “link imperatives to indicatives.” It’s helpful to avoid ‘should’ language, to learn to paint a vision, and to use directional words such as “journey” (see chapter 6). The second concerns the intervention needed in the lives of those who wander from the center. You could call this church discipline, but for Baker, the intervention he is writing about is much bigger. And he’s quick to point out that it’s quite messy and involves a bit of work. I think it would benefit many to read Baker’s thoughts on this matter.

I whole-heartedly recommend Centered- Set Church to all. Naturally, one might say that church leaders would benefit the most from it, but as Baker might write, “It is for all because we are all on a journey to the center…and that center being none other than Jesus himself…the generous and loving God.” So grab a copy, and be refreshed and challenged by where you are on your walk with others towards Jesus. 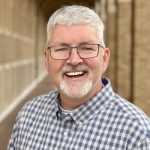 Jeff Kennon lives in Lubbock, Texas where is the director of the Baptist Student Ministries at Texas Tech University. He is also the author of The Cross-Shaped Life: Taking On Christ’s Humanity, published by Leafwood Press. You can find him online at www.jkennon.com.