A Marriage of True Souls

Readers of Marilynne Robinson’s novels Gilead and Home will undoubtedly have well-formed images in their heads of the character John Ames “Jack” Boughton. In the former novel we see him through the wary and circumspect eyes of John Ames, Gilead’s Congregational pastor for whom he was named, and for whom he is a source of personal, even theological, anxiety. In the latter, Jack’s strained yet affectionate relationships with his father Robert and his sister Glory are so meticulously wrought, one might think that another novel focusing on his character would be incapable of telling us anything new. Moreover, many of Robinson’s readers might be hesitant about delving even further into Jack Boughton’s troubled life and mind. Like a modern Augustine, he has a talent for honest self-examination and confession; unlike Augustine, he is unable (sometimes irritatingly so) to find any measure of rest for his heart in the love of God – so tightly wound is he within his own web of self-recrimination. Jack honestly identifies himself as a scoundrel and inveterate thief, a man for whom kindness and good manners represent the highest virtues he is capable of; yet because he can’t believe in a gracious God who might save him from himself, he sees no possible remedy for his existential crisis.

Except perhaps in the arms of a forbidden love.

I apologize if that last sentence sounds like I took it from the back cover of a hackneyed romance novel. I only say it that way because it underscores the somewhat absurd irony contained in this novel – that when a form a redemption finally crosses Jack Boughton’s path, it comes to him in the form of a young black woman in mid-twentieth century St. Louis, offering a love that wasn’t just taboo during that era, but was actually punishable by jail time. This means that the one pure blessing Jack has been given in life – the one thing that might finally confirm God’s love for him – is endlessly entangled in almost unendurable complications. Given this, who can blame Jack for feeling like the universe is at best indifferent to his existence? Contrary to the universe, though, Jack is totally incapable of assuming sublime indifference toward himself. Thus he becomes an ideal vehicle for Robinson to explore her own theological and existential concerns.

I believe this novel, in fact, represents a sort of culmination of Robinson’s fictional explorations, or at least those that have been present in the Gilead series. For it seems to me that this particular story’s been lying in the background the whole time, unwritten yet resting in Robinson’s imagination, informing what she had to say in the other books but also swelling in her mind to encompass those other books’ deeper intuitions and emotional keys. Jack shows us where the arc of Robinson’s literary and theological ideas has been tending, while also ratifying one of her central convictions – that a modern, non-theological culture tends to over-simplify both human consciousness and the vagaries of the human conscience. If I’m right about this, it also leads me to the conclusion that the perplexing Jack Boughton has been the central character in the Gilead series all along – a distant son of Adam who allows Robinson to directly explore her most fundamental ideas about the hidden-glory-amidst-fallenness of humanity itself.

But to return to the basics: in the three other Gilead novels, we are given only intimations of Jack’s life away from “home”. We know about a relationship with a black woman from St. Louis named Della, which resulted in the birth of a son. We know that the scandal of this relationship in 1940s-50’s America is compounded by the fact that Della, like Jack, is the child of a respected minister. We know that Della’s family disapproves of Jack and tries to keep them apart. And we know that it was, at least in part, due to the complications resulting from this forbidden relationship that Jack returned to the family home in Gilead for the extended stay that is integral to the plots of Gilead and Home. In this novel, though, we finally get the story of that time away, with the added benefit of experiencing Robinson’s wonderfully rich depiction of Della, a natural poet whose own strong personality and life experiences might easily provide the focus of Robinson’s next novel (which I hope they do).

Jack’s and Della’s is a highly unlikely love story, of course, like that of Lila and John Ames in Gilead (Robinson seems to be drawn to the narrative possibilities of such scenarios); but unlike any other relationship in Robinson’s fiction, the romance between Jack and Della to which we are introduced on page one sustains its affective power from beginning to end. While intense physical yearning is certainly part of the equation, Robinson shows (even declaring this through Della) that the romance between them is based more on a true marriage of souls. This is saying a lot, since Jack doesn’t believe in souls; however, one of the magical aspects of this novel is how Della incrementally helps Jack to see his reflection in her, opening up the possibility that he is much more than he thinks he is, and that life itself is founded on impenetrable mysteries to which one must finally assent, if not comprehend. Della’s love for Jack has an irreducible element of mystery, too. We don’t know exactly what she sees in him (besides his soul?) and yet Robinson’s fictional gifts don’t allow us to doubt that love. Jack himself is so astonished that something like this is happening to him that it prompts him toward ever-deeper questions about the nature of his strange existence, which in this case also includes indirectly questioning everything about the social façade of segregated, post-war St. Louis.

Exploring Jack’s character in greater depth in this novel prompts Robinson to allude to other stories and texts more extensively here than she does in her other novels. The most obvious example is that, whereas Home is the story of the Prodigal Son returned, this novel remains in the first half of that parable, exploring the prodigal’s dawning recognition of freedom’s false promises while showing why his mind is ultimately bent toward the sureties of home. To me, however, the most evocative allusions and parallels in the novel are those the author makes to Hamlet. Shakespeare’s most enigmatic play is mentioned early on, as one of the books Jack borrows from Della during their early courtship, and the question of whether conscience will make cowards of them all hangs over every relationship in this book. Jack, haunted by the august voice of his father occasionally arising in his head, and sometimes tempted by suicide, also tends to avoid decisive action until he has entertained second, third, even fourth thoughts; while Della, like Ophelia, struggles to assert her own integrity against her family’s outwardly benign yet suffocating control. But as in Hamlet, the most dramatic and meaningful action is located in the subtle shifts and probings which are occurring in the main characters’ hearts and minds.

Perhaps surprisingly, another major literary allusion that runs through Jack is to William Carlos Williams’s long Modernist poem, Paterson, which chronicles the fragmented lives of Americans living along another American urban river. Paterson, with its intense focus on the particularities of the local, is also intentionally emblematic of the singularity of the American experience amidst the (older) cultures of the world. Nothing, of course, is more particular to the American experience than its history of racial subjugation, perpetuated over centuries in a country ostensibly committed to freedom and equality for all. Fortunately for us, though, Robinson’s deep humanism enables her to limn the profound commonalities of mind and soul that exist between human beings of different races whom society strives to keep separate; and in throwing such deep commonalities into bold relief, Robinson gives us hope for our present cultural moment. Indeed, a delicate love story between a black woman and a white man, set in the middle of the country in the middle of the 20th century and displaying the astonishingly rich and complex humanity of each of its protagonists, might be exactly the novel we need right now. 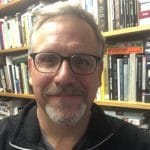 Michael Van Dyke returned to his family roots in West Michigan sixteen years ago and now teaches in the Humanities Division at Cornerstone University. He has written a book about Dietrich Bonhoeffer and has published poems in numerous journals. Currently he is working on two books: one about the Lord's Prayer and another about the poet Kenneth Rexroth. Follow him on Twitter: @vandykem89