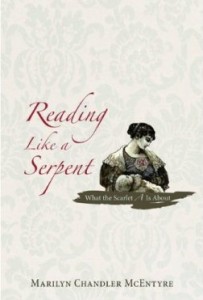 A Careful and Nuanced Reading

Reading Like a Serpent: What the Scarlet A Is About

Well, I admit it. I never had to read The Scarlet Letter in high school. Consequently, I didn’t read The Scarlet Letter in high school- or college, or after.   I imagine that my initial reaction to the book- when I finally did read it – was similar to many others’: a vague sense of appreciation for Hawthorne’s multi-dimensional treatment of his characters coupled with a vague sense of confusion as to what, if anything, he was ultimately getting at.  Luckily, the high-school student whose book I inherited had understood perfectly well and had written very succinctly on the last page “Theme: human beings should not judge others.  Moral: Be true to yourself.”  There you have it, as easy as pie, the exact same moral contained in every single Disney movie ever released!

Enter Marilyn Chandler McEntyre with her book, Reading Like a Serpent.  After years of coaxing college students through Hawthorne’s novel, she feels compelled to provide the public with an opportunity to read this American classic again and to draw from it not only a critical understanding of Hawthorne’s purposes in his own storytelling, but  also insights that come from scripture.  McEntyre, like Hawthorne, writes to a Christian audience and urges them on toward a more full and true reading of scripture. Each chapter in McEntyre’s book expounds upon a biblical theme that is elemental to The Scarlet Letter, such as confession, childlikeness and children, judgment, and love of neighbor.  Central also are ideas related to the use and misuse of language, and the roles of civilization and wildness.

One part that many people have trouble with in Hawthorne’s writing, as with scripture, is that none of the major (human) characters can be categorized neatly. They are much too real for that, so that Hester Prynne may embody sin and punishment, but also strength and longsuffering, both flagrant disregard for the law and a certain level of submission to her community. Roger Chillingworth may bookend his vengeful place in the story by showing fair-minded understanding at the outset and benevolence at the conclusion.  Arthur Dimmesdale, who is held in the highest regard by his flock, is secretly tormented by what he cannot or will not reveal. Pearl is both her mother’s savior and her torturer, a beautiful gift given as payment for a despicable act.  Young readers of Hawthorne’s novel have been confounded by the lack of easy answers contained in his book just as generations of Bible readers and scholars can endlessly debate meanings contained in numerous vague passages. The real problem comes, however, when one and only one meaning is assigned to a book, a character, a passage, or a place, when debate shuts down and understanding isn’t even looked for.  Moral: Be true to yourself- really, is that all there is to it? Absolutely not!

To be sure, reading McEntyre’s book is a circuitous route to take in order to get to a better reading of scripture.  Reading a modern analysis of a book written in 1850 of a fictional though historically based group of people some 200 years earlier and related by a fictional narrator with curious though not complete insight into the lives and thoughts of these people may not be the most intuitive place to start if one really wants to study the Bible. However, Hawthorne’s critique of the church of his day and of his ancestors’ day has struck enough of a chord with modern readers that it is entirely worthwhile for us to actually understand that critique and take it to heart. This is where McEntyre implores us to read, think, and understand. If we won’t take the time and energy for a careful and nuanced reading of this one – very insightful as it turns out – novel, how can we be trusted with words handed down to us from a source many years farther away than 1850, many miles more distant than Boston and with a string of narrators with very curious insights indeed, and put them into faithful action?

McEntyre states as her first matter of course that her book is not meant to be a work of literary criticism or scholarship. Rather it appears to be a plea to care for words stemming from what truly does seem to be a love of this work of literature and a deep appreciation that what is contained therein is of the utmost usefulness to anyone who cares to see more than one side of characters and their situations, both fictional and scriptural.  She uncovers the deeper and alternate meanings of words, phrases, actions, colors, and places, from the rose bush outside the prison door, to the seaside, to the very shapes of the initials of the main characters’ names. What others have taken for an overly romantic wordiness on the part of Hawthorne, McEntyre has used to find exquisite, if implied meaning. Through her meticulous work of gleaning and parsing McEntyre has been able to uncover Hawthorne’s plea for love over punishment and compassion over law and echo those sentiments wholeheartedly.

The level of exegesis that has been undertaken by McEntyre in Reading Like a Serpent is certainly enough to provide readers with a much more elucidating reading of Hawthorne’s classic than the typical high school English class. Although the effort required to really understand any work of literature is considerably greater than what is generally put forth for “required reading”, and the effort required to read a book about a book that most youngsters simply want to slog through to get it over with will be much beyond the inclinations of those who are most in need of the illumination, this book should prove to be a fabulous resource for those who already love to delve into literature or for those whose task it is to impart some semblance of understanding into youthful readers of Hawthorn or of scripture. McEntyre’s assertion in writing this book seems to be that a genuine desire to comprehend and to allow that comprehension to speak into our reading of scripture can have rich rewards if adequate care is taken.