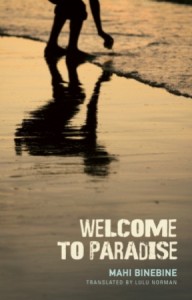 Look Across Jordan:
The Longing and Dreams of the Least of These

Welcome to Paradise: A Novel

Welcome to Paradise, by Moroccan author Mahi Binebine, resembles an African-American slave spiritual—brief, evocative, laden with longing for freedom. Like the singers of “I am a Poor Wayfaring Stranger,” the characters in Welcome to Paradise believe “there’s no sickness, toil nor danger/in that bright world to which [they] go.” Waiting on the Moroccan shore, seven Africans look across the Strait of Gibraltar, a modern-day Jordan, hoping to escape horrors of poverty and violence.

The novel’s present action is simple: six men, a woman and a baby wait for a trafficker to take them across the dozen miles to freedom in a small boat. Like African-American slaves before them, desperation forces them to depend entirely on traffickers for a crossing, which endangers their lives and rips them from everything and everyone they know.

The story-telling is imagistic, not surprising for an author whose modern paintings and sculptures are held in museums such as the Guggenheim. We feel the cold spray of the ocean; we shudder as the young mother and baby slip under the overturned boat, which the narrator calls “a giant coffin, a bottomless box open to the shades below.” The narrator, eighteen-year-old Aziz, observes more than acts in this flashback-heavy communal story. Aziz, whose name means powerful, slips omnisciently into the lives of each of the other hopeful immigrants and also into the memory of Morad, the “European Deportee,” who literally sells the harrowing journey.

Aziz recounts the European Deportee’s worst nightmare, which is, in a figurative sense, the nightmare of illegal immigration—being eaten alive in exchange for a nice apartment, a job raise, and a permanent work permit.  This nightmare inspires the French title for the novel: Cannibals. Yet, in spite of hearing how Morad—whose name means wish—was deported three times and spent several years in prison, the men and woman still try to escape unemployment or civil war, and leave behind bad luck or grief over losing family to accidental poisoning, illness or suicide. Aziz tells us their collective past tragedies give them skills they will need for new life as the undocumented: “a shadow among the night’s shadow,” “the air of someone apologizing for existence … slipped into the skin of a refugee … to be nobody: another shadow, a stray dog, a lowly earthworm, or even a cockroach.” Aziz reminds himself, “That’s it, yes, learn to be a cockroach.”

The first time I read the novel, the ending surprised me. A second, closer read revealed all the foreshadowing I missed. Like the narratives of real refugees, the story doesn’t end happily for all of the characters. Aziz and his cousin end up still in Morocco. At the end, Aziz and his cousin listen to a religious man “describing heaven as eloquently as Momo described Paris.” For many immigrants, the author seems to hint, Paris seems as unattainable as the heavenly paradise.

The religious elements are few—brief statements about Aziz’s grandfather and the nun who was like a second mother to him. Good works by Muslims and Christians are equal to Aziz, whose religious worldview would be moralistic theistic. But religion to the narrator isn’t much of an emphasis, as he and his new friends are fighting for their individual survival. This book would definitely be an appropriate one for discussions, and there was only one brief page of homosexuality that made me uncomfortable.

As I read this book, I was struck by the thought that if we could empathize with actual unauthorized immigrants as much we empathize with these characters, then perhaps vitriolic, partisan fighting over immigration policy would cease. If Christians of all political leanings personally knew immigrants who had literally risked their lives to strive for the American dream of freedom of faith and conscience, of working hard and making a better life for yourself and children, then perhaps we could agree to work together for immigration reform and immigrant rights and protections. Perhaps Christians could advocate together on behalf of the poor, widows, orphans and foreigners, leading to more biblical and grace-filled policies.

Will this slim novel change any hearts and minds? Perhaps not, but perhaps it will as we empathize with, and mourn for, the individuals whose stories are so unbelievable in magnitude of tragedy they can only be based in reality. Unfortunately for non-French readers, this is the first of Binebine’s novels to be translated to English. Although Lulu Norman translated Welcome to Paradise in 2003 in the U.K., it wasn’t released in the U.S. until this April. In 2013, English readers in America and Britain can acquire The Stars of Sidi Moumen, which offers another view of people living in shadows: child suicide bombers trying to escape the slums of Casablanca and find their own heavenly paradise.

In the introduction by Anderson Tepper, Binebine says that he hopes to give identity and history to those who hide like phantoms in the shadows of Europe. Through identification and sympathy, we discover the hopes of immigrants from Morocco, Algeria and Mali. Binebine said, in an interview about his visual art in 2004, “Art has no borders.”

It’s true, we affirm. Dreams for a better life also have no borders. No matter what your political leanings, read this book to remember—or meet for the first time—the individuals who are fighting to cross the Jordan to freedom. May their dreams not only be for a heavenly paradise.

Emily Zimbrick-Rogers is a fiction writer and scholar. She earned her MFA in fiction from Old Dominion University. Currently living in Philadelphia, she edits a community blog at the intersection of faith, arts and equality: wild-wisteria.com.