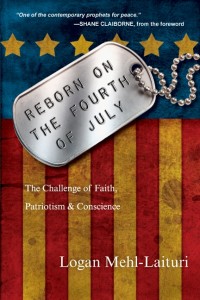 An Embrace of Self-Denying Martyrdom

Reborn on the Fourth of July: The Challenge of Faith, Patriotism and Conscience

I was a senior in high school, and three short months away from my eighteenth birthday, when 9/11 took place.  I decided that day that when I turned eighteen I was going to enlist.  A short time later, I received a call from a recruiter who informed me of the scholarship opportunities I could have if I joined the armed forces.  My mother forbid me from doing so.  If she had not, my life probably would have turned out much differently.

From the safe environment of a Christian college, I read Dallas Willard’s The Divine Conspiracy, in which he challenged readers to read the Gospels straight through repeatedly.  Through my reading of both Willard’s work and the Gospels, I became convinced that something was wrong with my views concerning violence and nationalism.  I was then later introduced to the writings of Stanley Hauerwas and John Howard Yoder, who showed me further the centrality of nonviolence to the gospel.

Logan Mehl-Laituri came to pacifism through a very different path.  Mehl-Laituri served in the Army, which included one deployment to Iraq, until he applied to be a noncombatant conscientious objector and was discharged with an “adjustment disorder.”

He shares his story as he was raised in an Orange County home in which his parents divorced during his teen years and he went in and out of church.  Wanting to be able to afford college, he enlisted in the US Army.  He tells of the formation that takes place in boot camp.  He says, “In order to withstand the sensory and moral onslaught of combat, military training entails desensitizing recruits.  The product of this training is called ‘reflexive fire.’  Essentially, soldiers are trained to fire by reflex instead of by conscious thought” (34).

Mehl-Laituri was deployed to Iraq the first time in January 2004.  He describes the boredom he experienced in between the intense moments (which he says are only about a tenth of the time spent in combat).  He also discusses the moral ambiguity felt by himself and his fellow soldiers.  He even says that of those who kill in combat, “Many of us experience the very loss of ourselves” (49).  After his deployment he struggled with posttraumatic stress disorder (PTSD) and relied on activities like surfing and nonmilitary friends to give him a sense of normalcy.

He then left active duty to attend college in Hawaii, which included a university Bible class which revolutionized his mindset about God and his life as a soldier.  He also attended a few Bible studies outside of his college classes which helped solidify his faith.  He came to the conclusion, “Being a Christian soldier means I was to ultimately obey God, rather than the officers appointed above me” (78).

After doing so, he was critiqued by many in the military around him for things like “cowardice” and “turning his back on the military.”  He was even accused of brainwashing when a friend of his applied for 1-O status.  There was little done to advance his application in the early stages.  During this time Mehl-Laituri decided to submit to baptism.  He arranged a time with a campus minister friend not realizing it was for the fourth of July.  He understood his baptism as “an embrace of self-denying martyrdom” (134).

The army decided instead of granting him 1-A-O status to reassign him to rear detachment, a state side administrative position.  Shortly after, Mehl-Laituri’s captain called him into his office.  The captain believed Mehl-Laituri had made up his whole CO application to get out of deployment.  The captain ordered him not to return to Alpha company and Mehl-Laituri was discharged from the army with an “adjustment disorder.”

Soon after Mehl-Laituri’s unit deployed without him.  He later found out that about a dozen of the members of his unit had died, leaving him with survivor’s guilt.

He decided that since he could not serve as a noncombatant conscientious objector to apply to go with a Christian Peacemaker Team (CPT) to Palestine.  He struggled here as he saw himself in the Israeli Defense Forces present there.  The experiences there helped stretch him and face his violent past.  He also began speaking at peace conferences and went to live with an intentional community in Camden, NJ, which at the time was the most violent city in America.  These experiences also tested his commitment to pacifism.

During a question and answer session after a screening of the documentary The Ground Truth at The Simple Way in Philadelphia, Mehl-Laituri was asked, “What can people do to support service members?”  Through this encounter, Melh-Laituri and some others started Centurian’s Guild, whose mission is to “protect and defend prospective, current, and former service members while bearing true faith and allegiance to God” (167).  Mehl-Lautiri though notes that “Centurian’s Guild is not the answer; it is just the beginning” (167).  Churches need to discern “where church ends and state begins, and when our duty to God trumps our obedience to country” (168).

Later Mehl-Laituri was invited by Shane Claiborne to go on a trip to Rutba, Iraq with him, some members of CPT, and a videographer (for more on Rutba see Shane Claiborne’s The Irresistable Revolution or Iraq Journal 2003, or Greg Barrett’s The Gospel of Rutba).  The trip forced him to face his violent past even further, but also helped bring him again to redemption.  He notes, “If not confronted, PTSD and moral injury can destroy lives and erode relationships” (175).

The work closes with five appendices like “Soldiers in the New Testmanent” and “Conscientious Objector Application.”

In Mehl-Laituri’s powerful confession, Christians devoted to pacifism are challenged to not simplistically demonize those who have or do carry the sword.  He reminds readers of the PTSD that effects many veterans and the high suicide rates present.  The work is a powerful challenge to the church to care for those who have experienced the hell of war and seek some healing and restoration in their lives and their relationships.  He may also help some Christians who have different views concerning violence to better understand those committed to nonviolence, rather than seeing them as cowards or anti-Americans.

Logan Mehl-Laituri also provides many helpful resources, from documentaries to articles and books, for those interested in studying further topics like the US’s involvement in war and training methods, veterans affairs, and conscientious objection.  This book is challenging while written at an accessible level.  It would thus benefit readers with a variety of positions on war and peace.

Shaun C. Brown is Associate Minister of Youth at Central Holston Christian Church in Bristol, TN, where he lives with his cats Tonks and Lupin.