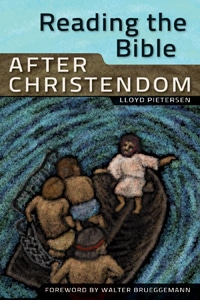 A Catalyst to Reevaluate our Traditional Interpretations of Scripture

Reading the Bible After Christendom

A seismic shift has shaken the Western world in recent decades, pushing Christianity and the church out of the center of society and into the margins. The era often referred to as Christendom featured the religious arm of the church and the secular arm of the state cooperating to build a Christian civilization. The collapse of this long-standing arrangement raises profound implications for the life and ministry of the church.

After Christendom is a series of books that aims to explore these implications. Lloyd Pietersen carries this discussion into the realm of how we read the Bible. He proposes that “…the alliance between church and state from the second half of the fourth century onwards has resulted in ways of reading the Bible fundamentally alien to that of the earliest church.”

The demise of Christendom presents an opportunity to interpret Scripture from a perspective that is less hindered by privilege and more consistent with the context of the Bible’s original audience. Pietersen lays out his case for this fresh look at how we read the Bible in three parts.

The first part provides an historical overview of the origins of Christendom and how it has impacted the church’s approach to Scripture. Prior to receiving imperial favor there was a common theme that unified the teachings of the church fathers. “The early Christians clearly understood Jesus to be the interpretive key to the Bible.”

This Christocentric approach to Scripture began to erode in the 4th century. Constantine’s Edict of Milan in 313 brought unprecedented religious freedom but with the Emperor’s favor came the baggage of his direct influence. When Constantine called the Council of Nicaea he not merely observed but presided over the proceedings. Constantine’s influence over the church and its doctrine became the catalyst for Christendom.

This new era brought an orthodoxy not determined by the appeal to biblical interpretation but to the political power of an imperial decree. “Increasingly the Bible was being read from the perspective of those in power, resulting in readings that reinforced the church’s increasing wealth, sanctified a priesthood-laity divide and consequently established a patriarchal hierarchy within the church.” Pietersen suggests that we should employ a hermeneutic of suspicion to the wealth and power-influenced biblical interpretations of Christendom.