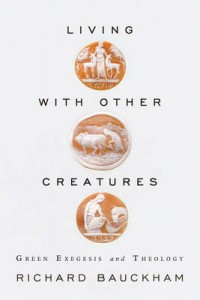 Living with Other Creatures:

The Irish saint Kevin, when an angel offered to clear away some mountains in order to build a city in honor of the monks, replied: “I have no wish that the creatures of God should be moved because of me. My God can help that place in some other fashion. And moreover, all the wild creatures on these mountains are my house mates, gentle and familiar with me, and what you have said would make them sad” (32). New Testament scholar Richard Bauckham uses vignettes from saints’ lives such as Kevin’s, as well as close readings of biblical texts in order to “recover a stronger sense of our own creatureliness as participants in the community of creation, constrained by and dependent on it” (134). The book is a collection of essays and lectures delivered over the past thirty years, organized by subject and given a fresh introductory and closing essay. Because of the occasional nature of the material, there is some overlap between the essays, but several strong themes emerge.

One of the primary themes is the relationship between humans and other creatures in creation. Western Christian understanding of this relationship has been based on the concept of human dominion, located in Genesis 1:28. In one of the early essays, Bauckham challenges the hierarchical interpretation of Genesis 1:28, specifically as it was formulated by Lynn White (“The Historical Roots of Our Ecological Crisis,” 1967). Bauckham argues that the mainstream Christian tradition is not actually responsible for the destructive “dominion” interpretation, but rather ancient Stoic philosophy and early modern scientists such as Francis Bacon. According to Bauckham, not dominion, but creatureliness is the fundamental relationship between humans and other creatures. While there is a hierarchical ordering in the biblical narrative, that ordering is qualified by community. Three points in particular are worth repeating: 1) whatever dominion is advocated by Genesis 1:28 is static and does not warrant imperial expansion through technology and other means; 2) if humans are indeed called to be “rulers” of creation, they should be mindful of the biblical model of kingship expressed most succinctly in Deut. 17:14-20, where the king is forbidden to accumulate wealth and indulge luxury at the expense of his subjects and bidden to remember his solidarity with them (228); 3) while it may be permissible to refer to humans as the pinnacle of creation, it is not  acceptable to understand them as the center of the universe – at the end of the day, we remain creatures like everything else.