Reviewed by B. Parker Haynes

If you’re a Christian who’s fed up with the animosity of the current state of national politics in America, Lee C. Camp has a solution for you: be political in church. While some encourage fellow disciples to leave politics to the politicians and focus instead on mission and evangelism or be a uniting voice seeking middle ground between left and right extremists, Camp believes Christians should be more political, not less. According to Camp, Christians have been brainwashed into thinking their faith is personal, private and spiritual while politics is about the real world. Originally, being a disciple of Jesus was scandalous not because of some private belief or personal principles that guided your life, but because it required a political allegiance which in turn changed the way Christians lived. In a time of intense division in the church, Camp’s way forward is in retracing the early church’s understanding that Christianity is neither right nor left nor religious, but a politic.

For Camp, a majority of American Christians today are caught up in their American identity, ultimately leading them to see their discipleship in terms of participation in American politics, either right or left. But this bastardization of Christianity, as Camp calls it, disregards the fact that Jesus embodied an alternative politics. Jesus faced three major temptations in his ministry, all of which he rejected: being a MAGA-type leader who would restore the kingdom of Israel, focusing on spirituality and saving souls, and reducing his work to social activism to defeat the systemic racism, patriarchy and homophobia of his day. Instead, Jesus inaugurated a political alternative to all three, which he called the kingdom of God. The substance of Camp’s book are 15 propositions expounding on this notion that the kingdom of God represents an alternative politics for Christians.

Much of Scandalous Witness critiques the two major political narratives competing for our allegiance today: the modern nation-state and the global market. Camp argues that many Christians in America have handed over their political identity, and therefore their primary allegiance, to a new savior: America. Whether we are a Republican or a Democrat, Camp asserts we are all liberals because we all participate in the liberal democratic order that America represents. Liberalism is less interested in the classical good life outlined by orthodox Christianity than it is with the individual’s ability to choose the life that gives “meaning” to him or herself. For the most part, according to Camp, modern Christianity acts as a chaplain or prostitute to America’s liberalism seeing the United States as the hope of the world, which just needs a few Christian values to make possible. Instead, Camp demonstrates that the church, rather than America, is the body in which Christians participate and Jesus is the one to whom they pledge their allegiance.

In order to truly embody an alternative politic, Camp believes that Christians must strengthen or reconnect with their practices of the sacraments, specifically baptism and the Eucharist. Because Christians are primarily resident aliens, Christian political engagement can only be ad hoc, tailored to particular situations, but the virtues cultivated through the sacraments offer the foundation for embodying an alternative politic. Baptism is the sacrament which gives Christians their identity as members of the body of Christ and signals their participation in a community not bounded geographically unlike the nation-state. Baptism is political because the church learns to see Christians who live in other parts of the world as family rather than enemies. In a similar way, the Eucharist is the way in which Christians share in an economic life together. One of the most fundamental political acts is eating food with another person, and in the context of the Eucharist, the church’s politics is embodied in the sharing of the body and blood of Christ in which we are constituted as the visible body on earth. A recovery of the sacraments and the virtues of hospitality, generosity and patience they develop is at the heart of recovering the politics that is church.

Scandalous Witness is a provocative guide for what it means to be the church today. Accessible, articulate and illustrative, it’s short enough to challenge the layperson yet thoughtful enough to enlighten the academic. I hope many Christians in America find this book and digest its implications for recovering the original scandal that was Christianity in the first century. 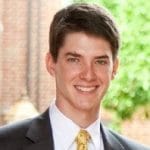 B. Parker Haynes is an ordained elder in the Western North Carolina Conference of The United Methodist Church. He received his Master of Divinity from Duke Divinity School and currently serves St. Timothy UMC in Brevard, North Carolina.