Acting with Power, Love, and a Sound Mind

Saving Us: A Climate Scientist’s Case for Hope and Healing in a Divided World
Katharine Hayhoe

Tell me what you care about and we can talk about why climate change matters to you—even if you don’t realize it yet. If you care about your health, saving money, the future of your children, beer, what the Bible says, loving your global neighbor, or a small, unreached people group in West Africa, you have reasons to care about climate change. Your life is already enriched by and deeply connected to people and places affected by the changing climate. Dr. Katharine Hayhoe distills her message regarding climate change down to four simple facts: “climate is changing, humans are responsible, the impacts are serious and the time to act is now.” Saving Us presents us with Dr. Hayhoe’s hard-won insight on how to convey this message in a way that brings us together and inspires action and hope in the midst of a polarized political climate.

Dr. Katharine Hayhoe has a delightfully complementary set of experiences that qualify her to speak with authority and insight on this topic. She holds a PhD in atmospheric science AND she grew up as a missionary kid in Colombia. She contributed as a lead author of the U.S. Second, Third and Fourth National Climate Assessments AND she is a mother, married to an evangelical pastor. She is a distinguished university professor AND a citizen of Lubbock, Texas —which was voted “the second most conservative city in the U.S.A.” Her evangelical Christian faith AND her scientific mind have BOTH motivated her to become one of the pre-eminent communicators on climate change. Her PBS series “Global Weirding” (available on Youtube) answers the frequently asked questions about climate change in a format accessible to all ages. Her popular TED talk The Most Important Thing You Can Do to Fight Climate Change Is Talk About It inspired this book and gives us a good idea of the contents of Saving Us. Dr. Hayhoe weaves climate science, Christian faith, and communication psychology together with dozens of personal anecdotes to equip us to overcome division and to “bond, connect and inspire” as we talk to people in our lives about climate change and its impacts.

In the first two sections of her book, Dr. Hayhoe takes a look at the political polarization that surrounds climate change. Opinion hasn’t always been so divided. As recently as 2008, Newt Gingrich and Nancy Pelosi did a commercial together where Newt says, “We do agree that our country must take action to address climate change.” Watch it on Youtube.  Dr. Hayhoe cites a study involving 56 countries that found, “people’s opinions on climate change to be most strongly correlated not with education or knowledge, but rather with “values, ideologies, worldviews and political orientation.” She reminds us how confirmation bias and the cognitive frames we construct lead us all to tend to embrace facts and narratives that reinforce our frames and identities while rejecting information that does not. But she insists that lumping people into the two extremes of climate “believers” and “deniers” reinforces the polarization when the reality is much more nuanced. She introduces us to Leiserowitz and Maibach’s classification system, “Global Warming’s Six Americas.” They present a spectrum of 6 groups: Alarmed, Concerned, Cautious, Disengaged, Doubtful, and Dismissive. The good news according to Dr. Hayhoe is that the “dismissives”—the people whose frames prohibit them from having a conversation or considering new facts—only constitute 7% of the population. You can have a constructive conversation about climate with 93% of the population if you are able to bond with them over something they care about and connect it to climate change.

At the center of her book, Dr. Hayhoe introduces us to the term “threat multiplier,” a key concept for understanding and communicating the impacts of climate change. This term, originally coined by the U.S. military to describe climate change, reflects climate change’s ability to amplify and exacerbate existing threats. Climate change may not cause hurricanes but the warming climate and oceans certainly make the storms stronger and last longer.  Yes, there were forest fires before climate change, but the warming climate intensifies drought conditions so that the fire season is longer and consequently, the fires have become bigger and more intense. In the area of West Africa where my family serves, one can’t say that climate change directly causes the conflict that is crippling our country. However, climate change is reducing the amount of arable land available in a country that struggles to feed itself which pushes more people deeper into poverty and increases conflict over land use. In our country, over 1.5 million people (7% of the population) are displaced by conflict. Did climate change cause that conflict? No, but it does amplify the causes behind the conflict and reduces the resiliency of the population to endure it. Climate change is a threat multiplier.

The last few sections of Saving Us provide practical suggestions to give us hope and equip us to inspire others. Dr. Hayhoe encourages us that although we need to speed up our actions to avoid the worst impacts of climate change, positive things are happening and momentum is building. She provides examples of: institutions divesting from fossil fuels, countries implementing effective carbon pricing, and countries like Scotland who have transitioned to 97% renewable energy. While emphasizing that important change must happen at the macro-level (“one hundred fossil fuel companies have been responsible for emitting 70 percent of the world’s heat-trapping gasses since 1988”), she shares her practice of adding 2 carbon reducing habits a year.  Every little bit helps and our small acts add up and give us an important sense of “efficacy” in the face of such a daunting problem. These “small” acts can also be quite contagious. She describes the attention and interest her new electric car stirred among her neighbors, generating conversations with erstwhile strangers. This “solar contagion” phenomenon has provoked multiple studies regarding the influence that one person installing solar panels has on the neighborhood. And of course Dr. Hayhoe reminds us of the power of talking about climate change through the lens of things we care deeply about.

Allow me to illustrate some of Dr. Hayhoe’s insights from my own journey. As a missionary to an unreached Muslim people group in West Africa, I had little thought for climate change as we learned the local language, built relationships and began sharing the gospel through Chronological Bible Storying (CBS). Over the years as I came to know and love my neighbors who scratched a meager living from degraded land, their complaints about the changing weather caught my attention.  Many had to re-sow their crops each year or helplessly watch them wither at the end of the season because the rains had become unreliable.  Sitting under a mango tree with my Muslim friends, scratching our toes in the sandy soil, we absorbed the Creation story and asked each other what it meant to be made in God’s image and how we could obey this mandate to “cultivate and keep” creation.  We redoubled our efforts in agricultural development, “Farming God’s Way” and beekeeping, and I got involved in the Creation Care movement. These local solutions are great and give me that sense of “efficacy” that keeps me going, but eventually I had to face the bigger systematic problem of climate change. I started to care about climate change because I love the Bible, the outdoors in general, and the Jula people in particular. The churches and individuals who have supported our work for twenty years tend toward a conservative point of view, but they also care deeply about these same things. Seeing “climate change” on social media may still trigger some, but they are quickly moved to prayer and generous action by the plight of the Jula whom they love.

With Saving Us, Dr. Hayhoe offers hope and a practical guide for facing climate change. I’ll leave you with her concluding paragraph:

“The future we collectively face will be forged by our own actions. Climate change stands between us and a breathtaking, exhilarating future. We cannot afford to be paralyzed by fear or shame. We must act, with power, love, and a sound mind. Together, we can save ourselves.” 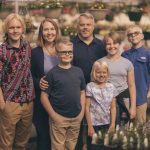 Brian Hauser and his family have served as missionaries with Christian Missionary Fellowship International (CMFi) in West Africa since 2003. Brian also currently serves CMFi as their “Creation Care Coordinator.”