Treasures Both Old and New
for a Life of Prayer

Teach Us to Pray: The Lord’s Prayer in the Early Church and Today
Justo Gonzalez

If the Christian God is real — if there is a God who not only creates, but creates out of love, out of a desire to relate to creation — then prayer is both natural and necessary. And yet prayer itself, at least in the how of it, is hardly obvious. The apostles themselves had to beg Jesus: “Teach us to pray.”

It is striking, then, that in the Didache, the first-century document said to contain the teaching of those very Apostles, the guidance on prayer merely echoes the answer Jesus himself gave them when they asked:

Our Father, who art in heaven …

That’s it. The Didache has all sorts of other instruction on what it calls “the way of life” — but on personal prayer, all it says, all it needs to say, is: Pray the Lord’s Prayer. Pray it three times a day. That’s it.

Can it really be that simple? Can this one, brief prayer truly express all we have to say to a God who longs to converse with us? Well, yes and no — so says what can accurately be called the “traditional answer.” The proliferation of treatises on prayer in the centuries following the Didache confirms that even the early Christians thought there was more, much more, to say on the subject of prayer. But that more was most often amplification, not addition. The ancient writers all begin by stressing that this one brief prayer is both sufficient and definitive. Proper prayer might involve other words, but it need not — and indeed ought not — introduce other concepts. Tertullian, for instance, declares that “as much as [the Prayer] is restricted in words, it is comprehensive in meaning” — and though we might, he allows, add our own particular pleas, we can only “construct a secondary top-story . . . on the foundation, as it were, of our rehearsal of the proper and normal prayer.” (49)

Though it comes millennia after these early writings, Justo González’s new book Teach Us to Pray: The Lord’s Prayer in the Early Church and Today fits squarely within this ancient tradition, and consciously so. As the subtitle indicates, González has put himself in conversation with many of these ancient Christian writers, and in his introduction, he too begins with the same theme, the comprehensiveness of the Lord’s Prayer:

“[T]his prayer is to serve as a guide for our entire life of prayer. . . . It is a prayer that warns us when our petitions deviate from God’s will. It is a prayer that also reminds us of things about which we often forget to pray. Taken as a model, this prayer reminds us that every time we bring a petition before God we must make sure that it follows the guidelines of this prayer” (4).

After laying this foundation, González moves through the Prayer, as many of his sources do, line by line, meditating on the significance of each individual petition, and also placing each within the broader trajectory of the Prayer. Most of the chapters begin with a sampling of the early Christian commentaries on the Prayer — González regularly cites Augustine, Gregory of Nyssa, Origen, Cyprian, and Tertullian — and they conclude with the author’s own meditations. One of the great benefits of this historically-rooted approach is that it reveals just how old our own “modern” questions about the Prayer are. We are hardly the first to ask what difference (or what sense) it makes for humans to pray that God’s already-ordained will be done, or why we must ask a loving God not to lead us into temptation. And by introducing the reader not only to these perennial questions, but also to some of the tradition’s enduring answers, González helps to forge a connection between Christians across the centuries.

This is not to suggest that Teach Us to Pray merely regurgitates what other texts, however venerable, have said about the Lord’s Prayer. González is keen to add his own insights, and he is certainly not afraid to depart from (or criticize) ancient emphases or interpretations. Most often González seeks to temper or supplement the early Christian tendency to internalize the Prayer — to focus on the kingdom coming within one’s heart, or deliverance from the evil of personal failure and sin. In the first chapter of Teach Us to Pray, which pauses on the single word “Our,” González sets the tone by exploring the communal horizons of the Prayer, which is raised up as an intercession for the whole world. “[T]he role of the church as a priestly body,” writes González, “is to take one another before that presence, each serving as a priest for the rest, and all jointly taking the entire creation before the heavenly throne” (28).

There are thus two distinct threads running throughout this book, each — on the whole, at least — complementing and challenging the other. But the book’s one flaw, in this reviewer’s opinion, is that González is perhaps too quick to diverge from his ancient sources, too willing to separate the two threads of the book. On more than one occasion, he dismisses certain pre-Modern interpretations as misguided or downright “strange.” (He says, for instance, that Christians “can’t really claim” — despite Origen and Augustine both insisting: yes, we really can claim — “that when we pray and say that God is in heaven we mean that God is within us” [53, emphasis mine].) The problem isn’t so much that González occasionally disagrees with his ancient interlocutors, but rather that he sometimes just doesn’t give their thought a fair shake. I would have liked to see him think with these writers at greater length, and thus allow his readers to explore the riches of a different (and yes, stranger) mode of theology.

Nevertheless, González has done an enormous service, both to his sources and his audience, simply by packaging these excerpts in a single, slim volume. And there is enough material here for the reader to pause, re-read, and make up her own mind about some of the more curious pronouncements coming from the early church. And in any case, this book is, in the end, a very “traditional” project from Justo González. His main theme is that the various petitions in the Prayer both offer a promise and elicit a commitment: we trust that God’s promised kingdom will come, but we also work to extend its borders; we trust God to deliver us from evil, but we also commit to live lives that reflect this promised victory over evil. Even the amen at the end of the Prayer not only declares our trust that all that has been said before it is true and trustworthy, but also signals “that we are so certain that it is so that we are committing ourselves to it” (162).

The Lord’s Prayer, then, no less for Justo González in the twenty-first century than for its earliest interpreters in the third and fourth, is a prayer that describes reality and shapes us to inhabit it. The Lord’s Prayer teaches us not only how to pray, but also how to live — so that, as Origen says, “our entire life [becomes] a constant prayer that says ‘Our Father, who art in heaven’” (quoted p. 17). Teach Us to Pray, by weaving together new and old perspectives on how the Prayer does this, is thus a valuable new resource for both personal and corporate discipleship. 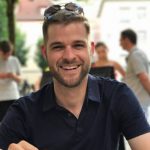 Philip Zoutendam is an Episcopal priest and part of the first class of North Carolina’s Reimagining Curacies program. He currently serves as curate at St. Titus’, a historically Black parish in Durham, North Carolina, where he lives with his wife, Erin Risch Zoutendam.