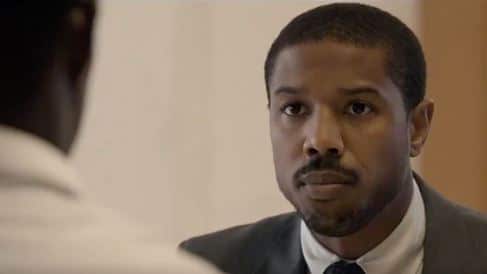 Living As People of Conviction

A Review of
Just Mercy
A film by Destin Daniel Crettin

Based on the book by Bryan Stevenson
Arrives in theatres January 10, 2020
Watch the trailer video!


I recently had the opportunity to see a pre-release screening of the Just Mercy movie, which was part of the Heartland International Film Festival here in Indianapolis. The film, based on Bryan Stevenson’s book of the same name (selected as our Best Book of 2014, upon its initial release), is highly anticipated by many readers of The Englewood Review of Books, and I’m delighted to say that it did not disappoint. Just Mercy will almost certainly be nominated for film industry awards, and Michael B. Jordan, who plays Stevenson in the film, will also likely be a contender for Best Actor awards.

Although Stevenson’s book tells a number of stories from his work with the Equal Justice Initiative (EJI), a nonprofit that fights for justice for wrongly convicted death row prisoners, the film focuses on the powerful story of Walter McMillan, one of the earliest cases that Stevenson took on. Director Destin Daniel Crettin was fastidiously faithful to Stevenson’s account of this story, so the narrative of the film will be familiar to those who have read the book.  For those who haven’t read the book, the story is a heroic one of the struggle against racism and the injustices in the American legal system on par with the best of John Grisham’s work or any other legal thriller.  But even for those who have read or re-read the book, Just Mercy is worth seeing, simply because it is cinema at its finest, viscerally portraying the obstacles that Stevenson had to overcome and the threats to his life that he endured as he was working on MacMillan’s case. Although Jordan offers a stellar performance as Stevenson, Jamie Foxx and Brie Larson are no less stunning in their roles as McMillan and Stevenson’s colleague Eva Ansley respectively.

What was most striking for me in watching the film, and I wasn’t struck as much by this in reading the book, was that the hallmark of Stevenson’s story is the virtue of conviction, of doing something not out of self-interest, but simply because it is the good, just, and right thing to do.  Conviction of the sort that drove Bryan Stevenson is such a rare thing in the 21st century. Even when faced with a bomb threat or a gun to his head, Stevenson did not give up his quest, and it wasn’t a quest driven by riches or attention.

President Donald Trump, of course, has been a poster child of sorts for self-interest, breaking all kinds of conventions (if not laws) intended to curb self-interest – dissociating himself from his business interests during his time in office, releasing his tax records, etc. But the problem of self-interest is not a partisan one; many Democrats have also had their pockets lined well by corporate lobbyists.  We’ve inherited a long history of individualism, and we have been formed by it to look out for ourselves, first and foremost. It’s often difficult even to imagine any other way of living. And yet another way is possible. Jesus, for instance, calls his disciples to deny themselves, take up their cross, and follow him. Denying ourselves doesn’t, I believe, mean harming or loathing ourselves, but rather it means resisting the ever-present allure of self-interest – of valuing wealth, prestige, or comfort over truth and justice.

Bryan Stevenson has been a living witness to this way of self-denial, of preferring the common good to his own life and success. The irony, of course, is that Stevenson has ultimately received much acclaim for his work. (Seems Jesus had something to say about this too: Those who will lose their lives for the sake of the gospel will find it.)

In the struggles against the mightiest forces of our day (racism, sexism, climate change, for starters), we need more public servants like Bryan Stevenson, whose primary motive is not their own interests but those of justice and the common good.

I hope that many others will be inspired as I was by this glorious film. It will deserve all the awards that it might eventually be handed, but its deepest legacy will be in the transformed lives of those inspired by it to use their passions and skills to live as people of conviction.

—–
C. Christopher Smith is the founding editor of The Englewood Review of Books, and author of several books, including most recently, How the Body of Christ Talks: Recovering the Practice of Conversation in the Church (Brazos Press, 2019).