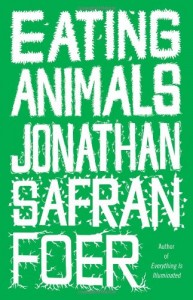 Putting Meat in the Middle
of the Plate of our Public Discourse.

[Editor’s Note: Although this book is older than most we review, I decided to run this review given the combination of the author’s heralded appearance at the recent Festival of Faith and Writing and the vast interest of our readers in food issues. ]

“99% of the meat sold in the United States today comes from a factory farm.”

In the 1970s, my missionary parents uprooted us from the barefoot paradise of Papua New Guinea and planted us in Southern California.  My mother, suffering a bizarre set of health issues, began looking for answers in healthy eating practices.  While other kids ate Twinkies and Ding Dongs, Mother read Adelle Davis books on nutrition and force-fed us cod liver oil.

Perhaps because of this, my need to fit in urged me to become a steak-loving “normal “person. Food, for me, was always more than mere sustenance; it was a visceral, beautiful, even creative thing. But as far being a political statement or a critical health issue, well that was strictly for the weirdoes.

Reading Jonathan Safran Foer’s Eating Animals was the first time that I seriously considered that the Chicken Parmesan in front of me or the meat neatly stacked in my refrigerator was once a living thing.  And confronted by the horrors of modern animal farming, as recounted in shocking detail by Foer, I had to face certain facts: factory farms are disgusting and dangerous for our health.

Foer made a three-year investigation into the sickening story that is American meat, describing with ghastly precision the disease, deformity and eventual mutilation of animals that defines factory farming today. I was filled with revulsion as Foer chronicled his grisly experience and quickly came to understand why Ellen DeGeneres has called Eating Animals “one of the most important books [she’s] ever read.”

The story is heart-wrenching, repulsive and barbaric.  One learns that the idyllic family farms we picture in our minds (think Charlotte‘s Web) have been transformed into secretive, highly secured factories lined with rows of “confinement pens” where animals languish, never seeing real daylight.  Foer admits to clandestinely breaking into a turkey farm to discover locked pen doors, gas masks on the walls, chicks with blackened beaks, and both dead and living birds matted with blood and covered in sores.  He details dozens of eerily similar stories indicting the farming of pigs, chickens, cows and even fish:

“The power brokers of factory farming know that their business model depends on consumers not being able to see (or hear about) what they do.”

In a riveting (if also occasionally, rambling) narrative, Foer contends the meat industry is corrupt, with structures supporting the consumer-driven “need” for cheap meat.  Foer notes that prices haven’t substantially increased since the mid-fifties, and that the “efficiencies” of the factory system are the source of this “benefit.”  I was stunned to learn that only 1% of the meat we consume comes from family-run old-fashioned farms.  The rest is from factories where biodiversity is replaced by genetic uniformity, and the antibiotic-laced animals may be contributing to strange flu like symptoms ravaging millions of Americans.

With gritty specifics, allowing for many perspectives, Foer draws personal conclusions, while making it clear that our collective actions can change these practices.  But only by agreeing individually to stop purchasing factory farmed meat.

In this philosophical horror story, I was confronted with my “need” and realized I can no longer be a part of supporting this corrupt system.  A “normal” evangelical Mom, I am choosing to no longer eat animals unless they come locally and humanely from a farm.

We the collective consumer must make conscious choices, even sacrifices.   Jonathan Safran Foer says it well, “We are defined not just by what we do. We are defined by what we are willing to do without.” We need to put meat in the middle of the plate of our public discourse.