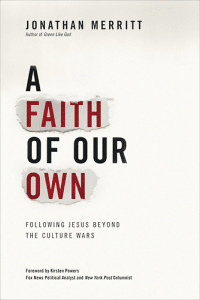 Full of Hope for the Future of Christianity.

A Faith of Our Own: Following Jesus Beyond the Culture Wars.

One of my favorite quotes is by David Lipscomb. He once wrote, “We are satisfied that voting does much more harm to the church than dancing does.” I love that quote because I believe it to be true, but also because it has probably been perceived differently by every generation since it was first written. The Christian generation before mine viewed dancing as a great evil, and voting as part of a Christian?s duty. Nowadays you would be hard pressed to find a Christian of my generation who believes in the evils of dancing, and voting is no longer an essential element of the Christian faith. This monumental change is documented in Jonathan Merritt?s new book, A Faith of Our Own.

A Faith of Our Own is a well-written book about things that are taking place right now in Christianity. The book is not just a collection of data, although Merritt has done his research. It is his personal story of growing up in the church. He is the son of a Southern Baptist President. He attended Liberty University, while Jerry Falwell, leader of the Moral Majority, was president. He was brought up in a church where Bill Clinton and other liberals were rebuked publicly from the pulpit. He was raised in an all around conservative environment in the middle of the culture wars. During his upbringing he bought into the hope the religious right was selling. They wanted to convince everyone that, “If all you will do is vote a certain way, then we can change America.” Merritt eventually discovered that this was a false hope. Even with a Republican in the White House, and a Republican-controlled House little or nothing changed. The two issues that were at forefront of the culture wars 30 years ago, abortion and gay-marriage, are still at the forefront today. Neither has been resolved.

Merritt does not just point fingers at the Religious Right. He spends more time talking about the right, because that is the side he knows best, but he also points to similar problems coming from the Religious Left. The problem for Merritt is not Right and Left. The problem is how people have practiced Christianity for the last 40 years. Often conservative and liberal churches have driven people to be more conservative or more liberal, instead of being more like Jesus. They have sought to work from the top down, by influencing people of power, such as politicians, to vote their way. So far, this has failed miserably, and the current generation is looking to change how church is done.

Merritt is not alone in recognizing the hypocrisy and flaws of the previous generation. Many Christians have come to the same conclusions Merritt has. The Religious Right was awakened to this fact when they lost the youth vote in the 2008 election. They quickly began asking questions, trying to figure out what they had done wrong. Merritt recalls an occasion in Chapter 4 of his book, when he was called to speak in front of a prominent conservative Christian organization about why they had lost the youth vote. The group was eager to hear Merritt?s data, but when it came time for him to offer some advice he is quickly silenced. They had no interest in making any drastic changes that would allow them to connect with the voters with whom they had lost contact.

Merritt also points out other reasons for the changes seen in this generation of Christians. They have been more willing to take mission trips. These trips have radically changed how these Christians now view the world. They no longer take the issue of poverty lightly. They have witnessed with their own eyes the poor living conditions of people around the world. The idea of the rich becoming richer is ridiculous, and even becomes a justice issue. This generation has also changed their view on issues related to homosexuality. Many still believe the passages which speak against homosexuality in the Bible, but they no longer view homosexuality as a choice that is made, but rather something a person wrestles with. They reject the idea that homosexuals should be treated as “modern-day lepers.” They are more likely to support “protections against violent hate crimes” and “hospital visitation rights and inheritances for gay couples” (116-117). The main reason for this change is that more and more young evangelicals know someone close to them who is homosexual. This generation of Christians has been reminded that homosexuals are people who are in need of Christ?s love.

One of the great things about A Faith of Our Own is that it is bi-partisan in several different ways. Some may be tempted to pigeonhole it into a category, but that would be because of their own prejudices. A Faith of Our Own is neither conservative nor liberal.  It does not lean toward the left or the right. If you want to call it anything, call it biblical. It seeks to put forth a way of looking at the world, by first following Jesus. Merritt understands this generation will not be perfect, and that they are already making some mistakes, but they are striving to live out their faith in a way that makes sense. Although he is critical of the previous generation, he does not demonize them. They had their faults, but they also did some wonderful things. A Faith of Our Own is a book about a generation of Christians who is “more interested in winning hearts than in winning the culture wars” (129). It is a book for anyone who wants to understand the current generation of Christians. As a person who belongs to the generation of Christians that Jonathan Merritt writes about, it is a refreshing look at how this generation has come to faith in some turbulent and confusing times. Although some parts are sad, and even hard to read, it is a book full of hope for the future of Christianity.