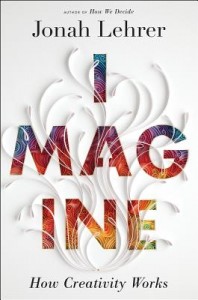 The Imagination of Faith

As Christians, we believe we are created in the image of the Creator, meaning we ourselves are creators, instilled with seemingly endless creative potential. Unfortunately, we often think of only a select few as the “creative types,” and we do essentially the same pigeonholing to creativity itself, assigning it as a character trait of writers and artists—rather than as a necessary and inherent ability that is not only God-given but is also a fundamental building block of faith.

One of the primary tenets of Jonah Lehrer in his latest book Imagine: How Creativity Works is that we are all creative. It is not that some of us are endowed with inventive imaginations and a propensity for insights and inspirations. Rather, he argues, we are all blessed with much the same mental hardware (from the familiar right and left brains to the more obscure Anterior Superior Temporal Gyrus), and thus the differences in creative output are more a result of nurturing, environment, and the recognition of problems to be solved. There are, he explains, even beneficial side effects to creativity associated with conditions like ADHD.

MORE THAN HOW TO

Parts popular science, psychology, sociology, and how-to, Imagine is a relatively small book that covers a lot of territory. The book demonstrates the breadth of creativity, with examples ranging from the world of business to the mind of Bob Dylan. Stories include the invention of the Swiffer, how the Nike slogan developed, and the beneficial, creative side effects of mandatory military service in Israel.

Some of the tips and advice in the book are not unfamiliar. For example, most writers know that it is necessary to set aside a piece of writing for some time before trying to revise it. But even in these cases, Lehrer adds scientific basis: it turns out, when I reread a paragraph I’ve just written, I’m using the ventral route, which deals with easy, familiar language; but when I set it aside and forget about it for a while, my dorsal stream—the brain pathway that is engaged when we must intently focus on our reading—kicks in and I can be more critical and see areas for improvement.

Some of the ideas and claims in the book can be a bit reductionist. Covering such a variety of topics and angles does not allow for much nuance or exception, but this should be accepted as an understandable and necessary byproduct of having an accessible and interesting book.  As Malcolm Gladwell points out, Lehrer writes well: describing the rundown neighborhood of an arts school in New Orleans where the warehouses and factories are now relics of a more prosperous era, Lehrer writes, “This is a neighborhood shadowed by the past tense.”

Reading the various anecdotes included in the book occasionally reminded me of The Rest of the Story, the radio program where Paul Harvey shared well-known results with obscure backstories (and that is how the Swiffer came to be). Although the endings to these stories were sometimes obvious before the a-ha moment, they were generally interesting nonetheless.

Click the Link below to continue reading on Page 2…