I am a product of the Western church.

I gave my life to Christ at the age of eight years old, so the church has been a part of my life, for my entire life.

I love the church! I love living my life with people who love Jesus and want to become more like Him.

But, as mid-life has arrived, I have begun to ask myself some new questions:

“What is my life as a Follower of Christ about?”

“What am I and/or ‘the church’ doing for the Kingdom of God?”

“Why don’t I even KNOW any Unbelievers?”

“How can I ‘go into all the world,’ while I safely surround myself with other Believers?”

Jon Ritner, the author of Positively Irritating, has also asked himself similar questions.

In the introduction of Positively Irritating, Ritner shares the process an oyster goes through to produce a pearl. Pearls start out as irritants inside the shell of an oyster. However, instead of rejecting this irritant and attempting to rid itself of it, the oyster embraces it, protects it, and creates something truly exquisite and sought-after. This is also what has happened in Ritner’s life.

Ritner explains, in Phase 1 of the book, finding himself disillusioned with his role as pastor in a mega-church. The weight of trying to put on the perfect church service every Sunday had become stagnating and strangely futile. His ministry had also become very demanding of his time, leading to less time with his family and other personal struggles.

Although his church was growing, Ritner felt they were only attracting “like-minded” people – Believers new to the area, Believers discontent with their old church, etc. He began to notice that many young people, raised in the church, were leaving the church to serve others in their communities. Ritner asked himself,

“Why isn’t the church offering more of these opportunities?”

After working with The Well in Brussels, Belgium for three years, Ritner began to understand that embracing the things seen as “irritants” to the Western Church – a post-Christian culture, where people don’t see the need or point of Christianity and/or are even hostile to Christianity – was the only way for the church to participate in things that would draw “Not-Yet” Believers. He began to realize that all Believers are called to go to the world, not wait or ask for the world to come to them; all Believers should be disciples making disciples, through relationships with “Not-Yet” Believers. In this way The Well’s ministry focused on reaching the unsaved in Brussels.

Ritner realized that his old way of presenting Christianity, leading with sin and forgiveness, was not going to impact people in the post-Christian world, as it did in the old way of “Christendom.” Instead of leading with talk of sin, as recorded in Genesis 3, leading with how we are all image bearers of God, as recorded in Genesis 1, possessing talents and abilities, provided an opportunity for him to not only interject his personal faith in Christ, but also gave “Not-Yet” Believers a way to discuss their longings and weaknesses.

Ritner discusses in detail how to change the rhythms of life to focus on others, to evaluate and be willing to change how the church operates; how to be faithful to Jesus’ intentions and Biblical instructions (the skleleton of the church), while maintaining a flexible external expression (the skin of the church.)

In Phase Three, Ritner discusses his transition to pastoring Ecclesia Hollywood, in Hollywood, California. At Ecclesia, he found a new Post-Christian attitude of the people to be,

“I know all about this Jesus and Christianity and want nothing to do with it.”

Ritner tells how Ecclesia’s focus had to change in order to reach post-Christian Hollywood. He explains how any kind of change, if not done carefully, may lead to opposition and failure, even when the change is needed. He explains how finding innovators at Ecclesia – those often on the fringes of church, but out doing something new and different in their community, helped convince the rest of the church of the merit of this change.

He likens the church to a retired war ship. After being decommissioned, this ship is set on display in a museum. Years later some of the planks on the ship must be replaced, with new planks, of the same type. It’s still the same ship, but new and improved. The post-Christian church is much the same, replacing our old methods, focus and mentality, with new ones that will reach a post-Christian world.

Ritner explains that changing the post-Christian mind-set will include disruptive disciplemaking, the “process of disrupting an individual’s preconceived notions about Christianity in order to reconsider what Jesus is really like.” Ritner lists a few of these disruptions as:

Eccelsia’s purpose and focus changed as its members began to live intentionally.

Ritner ends Positively Irritating with Phase Four, discussing how our churches can become more effective in a post-Christian world. He expresses that Jesus embodied all of the five giftings found in the church – Shepherds, Teachers, Evangelists, Prophets and Apostles – and that all are needed in order for a church to thrive, but especially needed are the Evangelists, Prophets and Apostles, as often, these are the innovators in the church.

In Positively Irritating, Jon Ritner challenges us, as products of Christendom, to change: to innovate, to listen, to care, to go. Ritner asks the question, will we lead others into being the light in this society, or will we hold on to our old, familiar “planks” and watch the ship break apart? 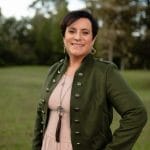 Sherra G. Edgar is a native Southeast Texan who enjoys reading, writing, drinking coffee with friends and yelling for the Texas A & M Aggies. She is passionate about journeying through life with other women, with as much love, grace and humor as possible…and, just a tad bit of sarcasm. Read more from Sherra at www.sherragedgar.com