Something No Technology
Will Ever Be Able to Reproduce

“In the modern world, the most dangerous form of determinism is the technological phenomenon. It is not a question of getting rid of it, but, by an act of freedom, transcending it. How is this to be done? I do not yet know.”
– Jacques Ellul, Author’s Foreword to the
Revised American Edition, The Technological Society.

It seems as if Joanna Kavenna is wrestling with this exact question in her darkly comic satire of a near-future world ruled by a nightmarishly self-interested tech company named Beetle. A fictive company blending Apple, Google, Facebook, and Amazon into one behemoth of a corporation, Beetle monitors and controls most every aspect of its users’ lives, and the preservation of its algorithm is everything. The characters, both human and artificial, experience the most conflict not between each other, but against the flattening drone of the algorithm, which must be preserved at all costs.

In this particular dystopia, everyone wears Beetle Bands that tell them when to brush their teeth, when their heart rates rise from agitation, and subsequently, when they need to calm down or have a snack. Highly personalized personal assistants also present the healthiest options for their humans in winsome, sympathetic tones: as one character makes a cup of coffee, she hears from her fridge, “’Perhaps you might like a fruit tea instead?’” And though cameras are everywhere, recording everything, coworkers no longer know what each looks like. Everyone works from home, and meetings are done in virtual offices, with the virtual avatar of your choosing that becomes the “you” seen by your coworkers. Most impressive of all, each day you can ask the algorithm what will happen today, and based its knowledge of you and everyone else, it can give you a startlingly accurate prediction of your day. It should be wonderful, effortless, all of this technology freeing humanity to focus on other things without having to worry about the unknowns of the future, keeping everyone healthy, well-informed, and within their target heart rate.

Except for a few unforeseen problems: enter a glitch in the algorithm that results in the death of an innocent man, coupled with a determined hacker out to fracture as many of Beetle’s algorithms as possible. Enter Zed. Zed, the letter ‘z’ as pronounced in British English, is the chain of events set off by hackers seeking to upend the algorithm’s vice-like control over people’s lives. Events, and the humans involved in them, once predictably controllable with the algorithm, suddenly begin to spin out of control. Zed, the harbinger of uncertainty and unpredictability, becomes the nemesis of the algorithm.

Kavenna’s narrative follows multiple characters through the onset of Zed and subsequent algorithmic adjustments that are made to tame it. Each character represents a different response to the technological bell jar in which they find themselves: Varley, a creator of the algorithm, is acutely aware of its flaws; Eloise, a cop who’s common sense often puts her at odds with the algorithm, almost to the point of death; and Guy, the Beetle CEO who’s completely lacking in any redeeming qualities or insight into the unyielding police state and human suffering that his corporation has created. Each of them could be us—how far will they bend to fulfill all that the algorithm asks of them? On any given day, we all bow to the convenience that technology provides us, but some of us, maybe even most of us, understand that this comes at some sort of cost. It is perhaps a cost we haven’t imagined yet, the price of that peculiarity, that aberration, that slow orchestral arrangement of each of us– bodies, minds, emotions, and spirits– that are engaged when we do things by hand, face to face, with all our hearts. It is this intangible treasure that we nickel and dime away to the false gods of technological convenience and consumption.

For Kavenna’s characters, for Ellul, and for us, then, the challenge becomes how to go about transcending the unforgiving rule of the algorithms inherent in the technology that dominates our lives. Indeed, Kavenna gives us all a kind of roadmap here, helping readers see how to transcend, as Ellul puts it, the technological through individual acts of freedom. Zed is truly a beautiful book in this regard. Though the insidious spider web of the algorithm seems inescapable, even catching the very words that people communicate with into a lifeless clump of meaninglessness, the characters who survive and thrive are those that remember the poetry, the color of things, the presence of books, and the artists and writers who have gone before us. Kavenna peppers her narrative with allusions to Charles Dickens, Walt Whitman, and Jorge Luis Borges. Russian satirist Nicolai Gogol and American writer and poet Djuna Barnes are featured particularly as inspirations to the characters trying to escape the algorithm.

But Kavenna doesn’t leave her characters with only inspiration from artists from the distant past. Zed is most poignant in demonstrating the radical freedom that is exercised when humans remember how to relate to one another as flesh-and-blood humans. The simplest acts of love—a long-estranged daughter showing up to her father’s sentencing, a child giving a starving person a loaf of bread, a poor barista giving the rich man coffee on the house—all of these become glorious anomalies of what is essentially the human presence, incomprehensible to the algorithm or its adherents. These simplest of acts remind us of our own forgotten power, that of our own mysterious material presence, which is often unpredictable like Zed but also capable of something no technology will ever be able to reproduce: that utterly human and unpredictable thing called love. 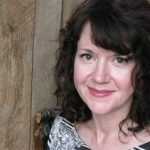 Julie Sumner is a writer who has worked as a critical care nurse, transplant coordinator, and massage therapist. She recently completed her MFA at Seattle Pacific University. Her work has appeared in Fathom, The Cresset, Juxtaprose, San Pedro River Review, Catalpa Magazine, and The Behemoth.