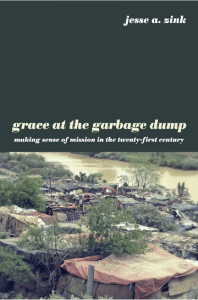 Moving into the Neighborhood

Grace at the Garbage Dump: Making Sense of Mission in the Twenty-First Century

Every movement within the Christian community adopts a set of favorite words.  In the 1990’s, the Church Growth movement rallied around words like Growth, Strategy, and Leadership.  In the 2000’s the Emerging conversation focused on words like Post-modern and Community.  But in the current decade, an ancient word has become a regular part of the Missional Church vocabulary: Incarnation.

In the book, Grace at the Garbage Dump: Making Sense of Mission in the Twenty-First Century, Jesse Zink tells his story of diving headlong into the incarnational life.  Jesse became an missionary sent by the Episcopal Church to a shantytown in the heart of South Africa called Itipini.  He struggles with the idea of mission, as many progressive Western Christians do, as the foundational idea for ministry in a foreign context:  “Here I was, a white man in black Africa.  I was stepping into a role that had been filled by so many men over the generations.  That legacy – and the legacy of the word mission – made me feel uneasy, no matter my professed and eager desire to serve others and save people in Itipini.”(16)
So Jesse settled on incarnation as a word that would help define his approach to mission.  Incarnation – God taking on flesh – is wonderfully illustrated by Eugene Peterson in The Message: “The Word became flesh and blood, and moved into the neighborhood.” -(John 1:14) Incarnation cannot be realized remotely or halfway.  Incarnation means you get up, leave what is comfortable and move in.
The story begins with the expected and understandable culture shock that goes along with any cross-cultural mission work.  There is a challenging language to learn (Xhosa, which involves three distinct “clicking” sounds) and daily-life realities that are hard to swallow (epidemic AIDS, rampant sexual abuse, oppressive generational poverty).  Jesse begins his mission by desperately trying to find a way to be helpful to the ongoing work in Itipini, to feel like he is doing something.  But this is where he quickly discovers the inherent tension of incarnation.
He writes in his journal during these first days:  “In this year I will need to shift my focus from doing to being…I need to realize that perhaps the greatest gift I can give right now is that of a loving and supportive presence.  I won’t be able to quantify the results of my work.  I am not at peace with this.” – pg. 33 He admits that it took many months to become comfortable with the idea of presence.  Drop a Western Christian into a needy culture and they immediately begin looking for success and quantifying change.  But presence is the essence of incarnation and Jesse determined to learn presence in this very challenging place.
At first, Jesse has a series of small victories.  He begins playing his guitar for a group of preschoolers at the mission center, teaching them “Johnny B. Goode” and learning some of the local praise choruses.  He helps to open a small library for the students and begins teaching English to a group of young mothers.  With a background in emergency medicine, he spends much of his time in the community clinic helping to care for normal bumps, bruises and fevers, but also the harsh consequences of alcohol abuse, HIV, and gang violence.  These activities allow him to begin feeling useful and included in the community.  “I was finally beginning to enjoy myself, to see myself and be seen as a small part of the complicated texture of life in Itipini.” (61)
It is at this point when the book takes a decidedly dark turn.  A loved and respected cook dies from a freak accident.  The mother and father of five school children both die of AIDS.  A woman he desperately sought to help get approved for anti-retroviral drugs dies after a series of exasperating and helpless circumstances.  Frankly, these stories were extremely difficult to read.  It is easy to see how anyone, no matter their ideals and commitment, could quickly become jaded. Jesse admirably continues to practice presence as best as he can.  He develops a micro-finance program for some of the local women and tries to have a positive influence on the young men.  But generational poverty and the need to simply survive thwart both attempts.  At this point, Jesse recognizes that he “had come to fill the role of problem solver of too many simultaneous problems,” and begins to contemplate going home.
Jesse spends the last few pages of the book describing how his experience reinforced the idea that “mission belongs to God, not us.”  He acknowledges that true mission starts with relationship, affirms that “at the very core, every person is a unique child of God blessed with certain gifts,” and hopes to “draw out the inherent talent and dignity of each person we encounter so they can journey onwards and draw others along with them.”  These insights are true and form a solid missionary identity.  But I struggled with how to make the connection between Jesse’s overall experience in Itipini and the God-with-us presence of incarnation.
To be sure, he “moved into the neighborhood” and sacrificed comfort, safety, and his life back home.  During the stories of frustration, loss, and helplessness the presence of Jesse was clear, but what about the presence of God?  What did he pray about and how did God answer?  Also, how did these people discover their identity as children of God along the way, even in death?  He comments that many of them were “already as deeply Christian as me” and that their need was to have relationships restored and present needs met.  He does not dismiss the value of “religious education” as integral to mission, but as western Christianity has so woefully discovered, becoming a disciple of Jesus doesn’t happen by magic.  It is in the center of the book – among those stories of no hope – that I wanted to see how the resurrection hope of Jesus took root and bore fruit.