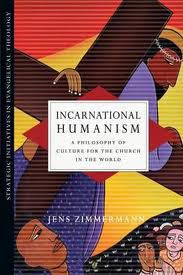 Intoxicated With the Wonder of the Incarnation

Incarnational Humanism: A Philosophy of Culture for the Church in the World.

Jens Zimmermann’s most recent work, Incarnational Humanism: A Philosophy of Culture for the Church in the World, is not a diffident book. It is at once an incisive analysis of what ails Western culture at present; a sweeping history of a grandiose, universal ideal; an argument for why a respected thinker in the twenty-first century might speak of a “universal ideal” with anything other than contempt; and a (by no means modest) proposal for how humanity in the West might find its way home. Above all, it is an attempt to demonstrate why Zimmermann believes, in the face of competing claims made by atheists, secularists, and advocates of a more multicultural approach, that “orthodox Christology provides the most promising source for a common vision of a truly humane society.” Throughout the work, Zimmermann is able not only to advance such a bold claim, but also to argue persuasively on its behalf.

Modern Western society, Zimmermann argues, suffers from a loss of identity, of meaning, and of purpose. This condition did not present overnight, but is rather a result of a centuries-long process by which those in the West severed their cultural values “from the transcendent religious sources that gave rise to them.” The turn (or rather, the seismic shift) from religion to the ultimately disappointing principles of rationalism and relativism has not resulted in the kind of fully humane society that Christianity’s opponents might have envisioned; rather, the West of today is a cultural context plagued by dualisms which manifest themselves in both church and culture as the separation of faith and reason, nature and grace, private faith and public policy, to name a few. If Western culture is going to recover any kind of comprehensive vision of what humanity might be, these dualistic perspectives must be exploded by a more robust, more life-affirming philosophy than anything modernity or postmodernity has been able to produce. Such a philosophy will, against secularism, hold that questions of truth and purpose can and should be a reflection–albeit a mediated one–of a transcendent order. This same philosophy will also, against fundamentalism, hold that life and the quests for truth and purpose are ultimately interpretive endeavors, that no written text is absolute, that ambiguity and complexity are not only inescapable, but intrinsic components of human existence, and that the kind of rich life for which humanity is created is not a life of easy answers and tunnel vision, but rather a hermeneutical journey lived as an adventure of faith seeking understanding. Zimmermann deems this philosophy “Incarnational Humanism” and claims its origins in Patristic theology:

The first theologians of the church were intoxicated with the wonder of the incarnation, and began to unfold what the faith’s deepest mystery–that God had become a human being while in no way diminishing his utter transcendence of creation–meant for our understanding of humanity and of the church’s relation to the world. Based on the incarnation and the consequent development of Trinitarian theology, Christianity prepared the way for modern conceptions of freedom, personhood, solidarity, and social compassion (10).

The brief passage above is perhaps the most concise articulation of the philosophy at the heart of Zimmermann’s vision. Much of the rest of the book involves the author’s tracing that idea from its earliest stages, through its development in and ultimate abandonment, before expressing his hope for its return to the center of Western culture, not just as one bright idea among many, but as the idea that shapes our understanding about the reality of the world in which we live and the place of humanity and human culture in that world. For Zimmermann, this will involve shaking off some of the accumulated prejudices from our more recent history. Specifically, and perhaps most problematically for some readers, we must return to the kind of engagement with Platonism that Zimmermann finds in the work of the church fathers.

According to Zimmermann, the Platonist bogeyman that has served as a stand-in for all totalizing and therefore oppressive ontologies, a bogeyman who has served as the primary example of a persona non gratis within Western philosophy at least since Nietzsche, would have been a stranger to the early theologians of the church. Against numerous voices both inside and outside the Christian community who aver that the influence of Plato is the point at which everything went off the tracks for an otherwise pristine, Hebraic form of Christianity, Zimmermann argues that it was in the fathers’ appropriation and revision of Platonic thought that a truly Christological humanism first found articulation. When thinkers like Gregory of Nyssa, Justin Martyr, and Irenaeus worked in a Platonic milieu, they were neither embracing nor rejecting Platonic metaphysics wholly, but rather critically adopting them and in the process transforming them in light of distinctly Christian doctrines, especially that of the incarnation.

It is this radically incarnational character of patristic theology that prevents early Christianity from falling prey to the “static, ahistorical, and world-denying nature of some Platonic teaching” as Nietzsche and Heidegger claim, but rather allowed Christian thought to engage and improve upon Plato’s notion that objects in this world “could be intelligible only by their participation in unchanging ideas, which lent them stable and identifiable characteristics.” This idea helped give shape to the patristic understanding of how Christ, the Incarnate Word of God, could redeem humanity from sin by participating, as one who was fully human, in the life of God. Thus, far from denying the world by means of Platonic thought, the fathers used this transformation of the Platonic idea of participation to affirm creation by pointing to the Transcendent God’s involvement with it. Much of Zimmermann’s work in this book involves tracing, via the work of Henri de Lubac, Jacques Maritain, and other scholars of Christian humanism, how these ideas became integrated into the history of thought in the West, before being jettisoned in favor of those ideas which currently hold sway. It is in these chapters that Zimmermann’s incredible erudition are on full display, as he engages a whole host of thinkers ranging from the most prominent to the far more obscure, in the process crafting a coherent narrative that serves as an origin story of our contemporary rootlessness.

This is not just a book about Plato, of course. Zimmermann is also quite capable of conversing with philosophical and theological giants like Kant and Schleiermacher, along with more recent voices Derrida, Foucault, and Gadamer, among numerous others. But it is Plato, who has been out of fashion for so long that it seems Zimmermann is summoning a museum relic to life, who leaves the most lasting impression, appearing before readers not as the father of all dualistic thought, but as an important ally in the battle against such thought.

If the concepts on display here–a transcendent order, unchanging ideas, stable and identifiable characteristics, the union of faith and reason–smack of the sort of “onto-theology” that Nietzsche and his postmodern heirs have sought to purge from our cultural vocabulary to make room for categories like rupture and difference, Zimmermann makes no apologies for this fact. He does recognize, however, that such claims could easily be mistaken for Christian triumphalism, and demonstrates in the book’s closing chapter–with the help of Hans Urs von Balthasar, de Lubac, Maritain, and, especially Dietrich Bonhoeffer–why even those who are not Christians should not fear the notion that Christ has transformed all reality, and therefore human culture should reflect a distinctly orthodox Christology. Granted, statements like “The incarnation, death and resurrection of Christ are the objective messages of the Bible for the Christian community (because it is founded on this reality) and current cultural realities have to justify themselves before Christ’s presence–not the other way around,” could easily be misconstrued as the words of a culture-hating sect, desirous of the kind of power that could be used to bend a godless nation to its will. But this is not the sort of witness that Zimmermann advocates here. Rather, Incarnational Humanism as a way of being in the world involves the church’s bearing witness to the reconciliation that God has effected through the incarnation, the death, and the resurrection of Christ.

This reconciliation will be embodied in a number of ways by the church–in its worship, its preaching, its communal life, and above all, in its celebration of the Eucharist. In these practices and modes of existence, the church takes upon itself the task of making Christ present in the world, and in doing so, to allow others “to be moved by the love whose goal is to reconcile the world to himself.” It is this love that makes us fully human, according to Jens Zimmermann, and thus, it is this love, and the church’s witness to it, that represents the best hope for the world.