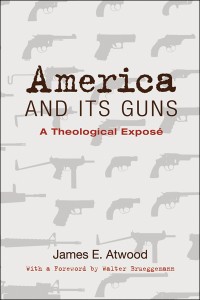 Clamoring for Safety and Security

America And Its Guns: A Theological Expose

Late last month, when reports broke of a gunman opening fire outside the Empire State Building, the news should have been more shocking. Public violence of this sort should have stunned those who heard about it on TV, the internet, or the radio. But instead, there was a normalcy to the event, an inevitability, even. It didn’t seem particularly earth-shattering or even extraordinary that someone might inflict this kind of violence on his neighbors. This was merely the latest in a series of fatal shootings that had dominated the headlines on a regular basis throughout the summer of 2012. The Dark Knight Rises. The Sikh Temple. Texas A & M. Add to this list the Virginia Tech and Fort Hood massacres and Jared Lee Loughner’s Tuscon killing spree, and it appears that in recent years, the kind of violence that shocked us when it unfolded at Columbine High School in 1999 has grown so prevalent as to seem commonplace. Mass shootings are neither a new phenomenon (according to Mother Jones, there have been 60 such incidents in the U.S. in the last thirty years) nor a wholly American one (Anders Breivik’s rampage in Norway last year was one of the deadliest such attacks ever carried out). Nevertheless, the recent spate of these killings on American soil should provoke serious reflection, beyond the normal political grandstanding and news-cycle hand-wringing that constitute the usual response.

In his recent book America And Its Guns: A Theological Expose, long-time pastor and fervent activist James Atwood addresses our nation’s deep-seated and problematic relationship to firearms of all kinds. He presents mountains of anecdotal and statistical evidence that probe the murky depths of our fascination with things that go “bang”. He blends personal narrative, biblical exegesis, cultural criticism, and statistical analysis in an attempt to sift through the cacophony of voices on the issue of gun violence and arrive at a response to the problem that is constructive, sane, and rooted in the principles of God’s kingdom rather than the gospel of individual rights. This is not to say that rights language is alien to Atwood’s argument. Attempting to rise above the kind of muddled partisan discourse that thwarts any real effort at productive dialogue, Atwood asserts on page 18 that “What our nation needs is balanced legislation that respects two fundamental constitutional rights: the right to keep and bear arms and the right to enjoy domestic tranquility as one pursues life, liberty, and happiness.”

Such rhetoric, which seeks to clear a path for meaningful conversation, might anger or alienate some of Atwood’s readers who do not think his denunciation of firearms goes far enough. From the beginning, Atwood makes it clear that he is not entirely opposed to guns or to gun ownership. He is an avid hunter, and even opens the book with an anecdote about the Remington twelve-gauge shotgun that he ordered from Sears and Roebuck in 1958. What Atwood opposes is a certain attitude toward guns that exalts the concept of gun ownership to a sacrosanct status without carefully measuring the cost in human life that certain gun policies in America exact each year. Throughout the book, he interrogates both the misguided perspectives of extremists within the National Rifle Association and the views of church members who insist that an issue like gun control is a political matter that has no business being discussed within the context of a congregation. Not content to let guns be a wholly “political” issue, Atwood remarks, on page 12, “What happens in a society because of guns makes them a profound spiritual concern that must be dealt with by people of faith. In spite of the metaphysical rhetoric to the contrary, guns actually do kill. That is their purpose. Although one cannot dismiss the political implication of guns, the spiritual implications, in my mind, far outweigh the purely political.”

Having established that gun policy should be a matter of deep concern for the church, and that the kind of balanced laws that our country needs will never “find the necessary traction in our highest legislative bodies” until there is “a spiritual awakening from God’s people,” Atwood sets about developing a theological reading of gun policy in America. Among the more interesting aspects of this reading is that Atwood chooses to root his argument not in a proper understanding of the sixth commandment (“You shall not murder”) as one might expect, but rather in a proper understanding of the second commandment (the injunction against idols).  Atwood makes the claim that, among certain segments of the American people, guns are idols. Further, the “Gun Empire,” which is made up of certain gun manufacturers, distributors, dealers, and extremists within the National Rifle Association, is an idolatrous institution, one of the “principalities and powers” that operates within the established religious and cultural imaginary of society. He allows that some will perhaps find such theologically-charged language over the top, but at the same time he refuses to ignore statements like the one made by former NRA executive Warren Cassidy: “You would get a far better understanding of the NRA if you were approaching us as one of the great religions of the world.”

Throughout much of the book, Atwood admirably supports his claim by unpacking the various qualities and categories of religious belief and practice that he finds at work within the Gun Empire. The Gun Empire, Atwood demonstrates, has its own initiation rituals in the video games, violent movies, and toy weapons that inspire fascination and affection for instruments of destruction and the heroes who employ them. The Empire has its own language, a sort of tough-guy vernacular that permeates our speech. It has its own gatherings, the more than 5,000 gun shows that generate millions of dollars for weapons dealers. Most importantly, the Empire has its own foundational myth: “Our trust in violence is linked to our founding fathers and our curious national myth that Almighty God ordained the United States to be ‘the trustees of the world’s progress,’ ‘the guardian of its righteous peace,’ and even ‘Christ’s light for the salvation of the world’. This myth undergirds the Gun Empire’s zealous (and misguided, Atwood argues) defense of the second amendment. It shapes the conviction that “Guns save lives” and that widespread legislation allowing for conceal-carry permits will restore power to the citizenry and ensure that criminals can never threaten the security we claim as a birthright. Despite their promises and assurances, however, Atwood argues that the idols the Gun Empire worships–like all idols–will ultimately disappoint those who trust in them. The more we clamor for the security and safety that we believe guns will provide, the more elusive these desires will prove to be.

In the opening chapter of America And Its Guns, James Atwood remarks that he waited for years for someone to write this book, and finally decided to write it himself. Countless readers, hungry for a well-researched, eloquently written book on a complex and sometimes confusing issue, will be profoundly grateful that he did.