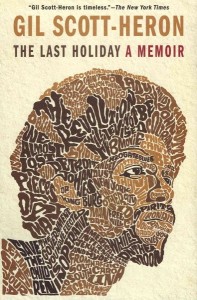 The Last Holiday: A Memoir.

Although Gil Scott-Heron is often called “the godfather of rap,” he never wanted that title. Like contemporary rap artists, he spoke biting social commentary, repeating refrains for emphasis, but his performances showcased the musicality of the spoken word, set against an ensemble of bluesmen. Scott-Heron considered himself a “bluesologist,” a verbal Coltrane of poetry, percussion and politics.

In many ways, this man’s meteoric rise is worthy of a celebrity memoir: Gil Scott-Heron made waves. As a child, he was one of three African-Americans to integrate a middle school in his small Tennessee town. When he moved to New York with his mother, Scott-Heron was one of five students chosen for a scholarship at an exclusive white prep school. At age 19, Gil Scott-Heron wrote his first novel The Vulture, while skipping his sophomore year of college. Upon his return, he organized a classroom boycott over medical care for students. In 1970, at age 21, he sold a volume of poetry and landed a recording contract for Small Talk at 125th and Lenox, which includes the hit “The Revolution will Not be Televised.” Before he completed his undergraduate degree, Johns Hopkins University recruited him for its masters program in creative writing. At age 24, Gil Scott-Heron taught high school writing in Washington D.C., until he could perform full-time.

In one of his best-known songs, Whitey on the Moon, Scott-Heron poses the question: who pays for the race to the moon, and at what cost? (Alexis Madrigal, senior editor of The Atlantic, recently discussed the impact of this song on his own understanding of technological progress.)

But how did I, a freckle-faced small-town girl, stumble upon this socially-charged work of Gil Scott-Heron?

I became a Christian as a teenager in the rural midwest, and my commitment became more real to me when I was allowed to attack my newfound church with hard questions. My church and my pastor encouraged this sort of conversation. While sitting on the pastor’s front porch, I heard Larry Norman’s The Great American Novel playing on the stereo:

You say we beat the Russians to the moon,
and I say you starved your children to do it.
You say all men are equal, all men are brothers,
tell me why are the rich more equal than others?

I committed the song to memory. I learned it on the guitar.

When I arrived at my suburban college in 1980, my peers wore buttoned-down shirts and preppie-plaid pants, and I could not tell if they were rich or just posing. I still yearned for a revolution, for attention to the plight of the poor. My classes highlighted terrible injustice in the world. Two months after my freshman year began, I proudly voted for Jimmy Carter, who represented earnestness and truth. When Ronald Reagan won the election, I harbored a bitter suspicion that I was born in the wrong era and attending the wrong school.

My solace—my survival—depended on the crown jewel of my college possessions: my turntable. I saw a glimmer of light with John Lennon’s new album, and plunged into sadness when he was shot. I wandered into a gray record store in a strip mall on the highway, flipping through $1.99 LPs in the sale bins. There I found Gil Scott-Heron glaring at me from the cover of Reflections, where his mirrored shades sparkled with the Statue of Liberty and hooded Klansmen, a dollar bill and jazz greats. The final cut on the album was called “B Movie,” which could only refer to the acting career of our new president.

I hesitate to write this story, because I do not like to write about politics—especially not in an election season. I was 18. What I hated, then, was pretense, and now I can say honestly that both sides pose. Both sides use scripts that sound like something from a cheap movie. Then, what I wanted was for someone to say something straight. When I put that vinyl on the turntable in my dorm room, I found a prophet, a humorist, a truth-teller.

I loved Gil Scott-Heron for that year, as I clung to my turntable for dear life. I found his older works in the library. I looked up his references to a town called Johannesburg. I found my knowledge of world events was appallingly shallow.

Continue reading on Page 2 by clicking the link below…