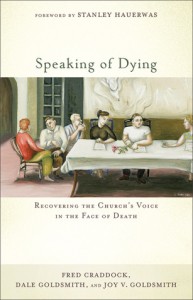 To Be a Part of Dying

Speaking of Dying: Recovering the Church’s Voice in the Face of Death

Jesus died. He knew he would die and he told his disciples he would die. Peter, in particular, didn’t want to hear it. On the evening before Jesus died his followers refused to believe it and they couldn’t even stay awake to comfort him while he prayed. Like the early disciples, Christ’s disciples today do not seem to want to deal with dying. The church needs help in living and dying as Christ lived and died. Fred Craddock, Dale Goldsmith and Joy V. Goldsmith wrote Speaking of Dying: Recovering the Church’s Voice in the Face of Death to help the church in the work of following Christ even when members of the church, or those they love, are dying.

The authors’ work is the result of the life of and death of Rev. Janet Forts Goldsmith, an associate pastor of a Presbyterian congregation. Janet was Joy’s sister, Dale’s daughter and Fred Craddock’s student. Janet was diagnosed with cancer ten years ago. During the nine months that passed from the time she was diagnosed until the time she died, Joy V. Goldsmith, her sister, took care of her. As Janet was dying, the church she helped lead struggled with her dying. The church was at a loss, not believing or dealing with the fact that this pastor, not yet 35 years old, was going to die. Janet and Dale both observed how people were in denial and lacked the skills to deal with this struggle.

Rev. Goldsmith’s dying is not the subject of this book, but it is a catalyst that brought the authors to look at other churches that had pastors who went through a time during which they knew they were dying. They wanted to know if others had done a better job talking about what the church was going through during this time. They looked at ten churches. Sadly, they discovered that churches paid little attention to the dying church leaders, preferring to outsource the dying process solely to medical professionals, ignoring and denying the difficulty of watching a loved one dying. Ten churches, ten pastors who had died, and not one of the churches had done much to address dying. Using the data gathered from talking to these congregations, the authors look at the overall picture of how the church handles dying. What they see is not promising.

From birth to baptism, through marriage, to old age (especially old age) and death, the church is the one institution in which people of every age and stage in life should be able to find a place. But even at its best and despite its appropriate claim to be a “one-stop service,” the church leaves serious holes in that service and tacitly forfeits its responsibility at critical moments when it seems not to grasp the importance of its common witness at two rites of passage: the transition to adulthood and end-of life coping.  (27)

Does the church even have anything to say about dying? The authors believe that it does; that the church has a distinct voice and witness in a world that cannot ignore how lives end. They claim that the church does well with death, but not as well with the work that may lead up to death. Speaking of Dying isn’t about death, it’s not a handbook for someone to know what to say when someone dies, it’s about preparing for the things that come before death.

The book was written in community, and the authors obviously intend for it to be read in community. Each of the eight chapters ends with discussion questions, lending itself to small group study. The book, though it is theological, is not written solely for theologians. The authors take care to speak to all Christians who would like to follow God’s will when dying or caring for those who are dying.

Because the book is written to help the church learn again how to speak of and to the dying, Jesus is the focus. Examining Jesus Christ’s living, his dying, his death and his resurrection, the authors find much to help the church recapture its voice in addressing the end of life. They demonstrate Jesus’ care for the bereaved (64). They see how Jesus took care of others even while he was dying on the cross, (and remind us that “Jesus saw that his dying could provide strength to future believers. Surely that applies to any and all times when Christians need strength.” [authors’ italics] (69). They remind us that for Christ, dying was not the worst thing that could happen to a person, that Christ’s admonition to us that if we do not commit ourselves to a life in following God, we are as good as dead (60).

Though Christ’s living and dying are central to the theology of dying that this book posits, the authors also spend time looking at ways that the church has effectively talked about dying. The authors look at ten people who had something to say about the ending of life: Paul, Ignatius, Julian of Norwich, Thomas à Kempis, Marguerite Bourgeoys, Miguel de Unamuno, Dietrich Bonhoeffer, Flannery O’Connor, Penny Lernoux and Joseph Cardinal Bernardin. Though each biographical snapshot is only about two pages, looking at how these people looked at their own dying is an effective reminder of how the church might witness in this modern world. From deaths of martyrdom, long illness and sacrifice, the reader is reminded that “living a life of Christian integrity is the best preparation for whatever might come, including dying” (149).

The voice of the church in contrast to the world is too quiet. The world says “Do everything you can to avoid dying.” The church says “God’s will be done”. The world says “take this pill and everything will be fine.” The church says “dying is not the end.” The authors do not provide new tools for the church to deal with dying, they help the church remember what has already been given to the church through God. They spend time looking at how the sacraments of baptism and the Eucharist inform our dying. They look at how theological words like creation, eschatology, forgiveness and grace need to become more significant parts of the vocabulary of the church.

A proper response to dying requires community and communication. The authors put together a somewhat forced acronym around the word table. They expand on five ideas which make up the device: talk, awareness, body of Christ, listening and Eucharist. The authors remind the church that to be the body of Christ is to be part of dying; dying to self, dying for Christ, dying for neighbors. As followers of a God who became human and died, the church should be speaking God’s message of living and dying with a more prophetic voice. In Speaking of Dying, the church is given a helpful tool, a reminder of the voice given to it by God.