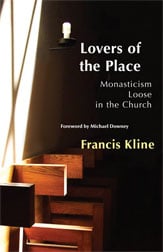 The Staircase to Richer, Fuller Living

Lovers of the Place: Monasticism Loose in the Church

When I received Lovers of Place, I opened the book with eager anticipation.  I was intrigued with the subtitle “Monasticism Loose in the Church” and looked forward to reading the book. Then I was disappointed to find out that the book was first published in 1997, and was republished in 2012 without revision.  “Why?” I wondered.  As I read through the book I found that my hopes were not high enough!  Indeed, Lovers of the Place, though only a few years in print, holds the promise of becoming a spiritual classic.

The opening chapter presents an extended allegory of the life of the church, an allegory that rings true with my experience as a parish pastor, and sets the agenda for the rest of the book.  The second chapter opens up the allegory as the author explains the transition from “personal pre-occupation to wonderment at the larger world of the church paradoxically inside the building.” (18)

He states that the process of moving into the realm of faith “is based on the dialectic of the inner world of spiritual growth and the (communal) world of Christian liturgy.” Such a process moves from “an ever-increasing self-knowledge of my issues, that is, my shadows and sinful patterns, (and)  gradually gives way to concomitant knowledge and appreciation of my neighbor’s situation, which I presume must be similar to my own” in the move to compassion toward one’s neighbor. (22) The rest of the chapter opens up the gradual process within the individual of “faith, hope and love, or … striving, proceeding and possession, or … the stages of purgation, process and union.” (25)

Chapter 3, titled “Within the Gates,” is a commentary on the monastic life. The author gives us an informative description of the “monastic gift” lived out within the monastery, a guide for the novice and more than a review for the well informed person.  He opens up for the reader not just the “what” of monastery life but also the “why”, being the way that the monk or nun “put on Christ and (comes) to know his power and love.” (31)

In chapters 4 through 6, one enters into the heart of the book.  I found it slow reading as if I were walking on sacred ground.  It was as if I were on an extended retreat with my spiritual director, reviewing my own spiritual dynamic and growth. These chapters are based on the Rule of St. Benedict, and follows the steps one takes in moving from one’s pride and self-importance downward to humility, which the author describes in the words of St. Benedict as climbing upward on “the ladder of willing humility (which becomes) the staircase to richer, fuller living.” (50).

The Rule of St. Benedict describes twelve steps of humility from “the gradual buildup of faith … the painful passage to hope … and the ascension of love in (one’s) heart.” (p. 51) The author in these chapters paradoxically uses both Benedict’s Rule as well as the model of Christ “who humbled himself and became obedient to death, even death on a cross.” (Phil. 2:5-11) And he does so with a sanctified creativity and a depth of wisdom embracing the internal process of the life of the soul.  In these chapters I am impressed with the author’s use of the Psalms which surely comes out of the daily liturgy and meditation in the monastic life.

In coming to chapter 7, the reader will come up for air and take a deep breath, returning to the surface after the deep journey to one’s interior life examined through the lens of humility. The author shares his vision of the future of monasticism beyond the gates of the monastery. This topic was what attracted me to the book in the first instance. I have been a member of a local “monastery beyond the walls,” and I wanted to find more light on how to live in community this way.  I found so much more!

The author states that monasticism in the present and future, as in the past, will adapt itself in different and diverse cultures.  The identity of the monastic is found in the movement of the Holy Spirit in the community of the Holy Spirit.  The monastic’s are “lovers of the place” (hence, the title of the book) which defined is more than a geographical location. The “place” has become the contemplative monastic life in the human heart “where we turn from God in shame of our deeds, or embrace God in faith and trust … (and) there discover Christ.” “Monastic doctrine is to know Christ and the power of his resurrection. It is to redefine the term “place” because, after his resurrection, the place of his glory is there where he is present with the power of his teaching and his person.” (121-122)

Again, Lovers of the Place was written in 1997 when the fruit of reform from Vatican II was ripening during the high days of Pope John Paul II when the Catholic Church began to embrace in different ways those beyond the Catholic Church.  In the years since Vatican II, monks and nuns have moved outside the monastery walls into new communities, keeping the faith but serving the church in new ways.  Yet, the Catholic Church appears to be in a process of becoming more exclusive at present, as reflected in the rising conflict between the American nuns and the Vatican, for example.

Somewhere around the 1980’s, the movement in the Protestant churches called “new monasticism” was birthing. It is a wide and diverse “movement” at present, being too young to be defined.  What is held in common by these groups is a recovery of the monastic gifts expressed within community, and with a heavy emphasis of service to the community. One example of the new monasticism is the Rutba House Community located in Durham, NC where in a 2004 gathering where two dozen communities named the ‘12 Marks of a New Monasticism’ that they share in common. Father Francis Kline would be excited.