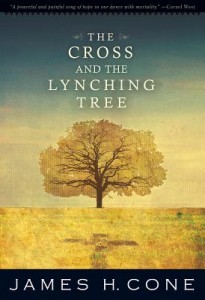 Immersing ourselves Deeper
into God’s Mission of
Reconciling Creation

I have long had a deep respect for the work of James Cone.  I don’t always agree with him, but even when I don’t I find his work compelling and engaging.  Although I am sympathetic to his emphasis on liberation theology, I don’t agree with the way in which he leaves the door open for the use of violent means in pursuit of liberation. Similarly, I’ve never been able to accept his embrace of both Martin Luther King, Jr. and Malcolm X, as “advocating different methods that corrected and complemented each other, as they worked for the same goal – the liberation of black people from white supremacy.”  Despite my disagreements with other parts of his work, I am convinced that in his newest book The Cross and the Lynching Tree, he is spot on.

The cross has been transformed into a harmless, non-offensive ornament that Christians wear around their necks.  Rather than reminding us of the “cost of discipleship,” it has become a form of “cheap grace,” an easy way to salvation that doesn’t force us to confront the power of Christ’s message and mission.  Until we can see the cross and the lynching tree together, until we can identify Christ with a “recrucified” black body hanging from a lynching tree, there can be no genuine understanding of Christian identity in America, and no deliverance from the brutal legacy of slavery and white supremacy” (xv).

The Cross and the Lynching Tree is thus a pointed case study that reminds us of the overwhelming whiteness of Western Christian theology – as has been explored in depth in recent works like J. Kameron Carter’s Race and Willie Jennings’s The Christian Imagination.  Cone is clear that the cross and the lynching tree are not equivalents – theologically or historically speaking; these two shared  images, he emphasizes are essential to racial reconciliation in America, particularly racial reconciliation within the church.  “Neither Blacks nor whites can be understood fully,” he says, “without reference to the other because of their common religious heritage as well as their joint relationship to the lynching experience” (165).

This new volume consists of five essays that explore various facets of the relationship between cross and lynching tree, along with an introduction and conclusion.  The first essay explores the cultural experience of lynching, particularly the terror that it struck in the lives of many black Americans of the early twentieth century, and yet that many found hope in the cross of Christ that “God was with them, even in suffering on lynching trees, just as God was present with Jesus in suffering on the cross” (21-22).  This essay was eye-opening for me as a white Christian who grew up in a racially diverse area well after the height of the lynching era had passed; I was familiar with the historical practice of lynching, but had no idea how widespread it was (over 5000 victims) or how great a fear its shadow cast over black Americans.

In the second essay, Cone takes Reinhold Niebuhr to task as a prominent theologian of the lynching era, who was strikingly reticent on the practice of lynching. Although I understand the extraordinary stature of that Niebuhr has held in American theology and thus why this chapter is a necessary part of Cone’s argument in the book, it was probably the least interesting chapter in the collection for me because I’ve never been attracted to Niebuhrian realism.  In the third chapter, Cone contrasts Niebuhr with Martin Luther King, Jr.  The difference  between the two key figures, he says  is that: “Unlike King, Niebuhr viewed agape love, as revealed in Jesus’ cross, as an unrealizable goal in history – a state of perfection which no individual or group in society could ever fully hope to achieve.  He also points out that King lived the meaning of cross throughout his life.  It was not just an abstract concept for him, as it was for Niebuhr.  Cone implies here a pointed question: has the predominant white theology in America no sense of what it means to live the cross of Jesus?

In the book’s fourth chapter, Cone examines the many ways in which black artists – in a variety of media — have drawn parallels over the years between the cross and the lynching tree.  From poets like Countee Cullen and Langston Hughes to the work of W.E.B. DuBois, Cone emphasizes that “Artists recognized that no real reconciliation could occur between blacks and whites without telling the painful and redeeming truths about their life together” (113). Cone also points out that black churches had not been as careful as these black artists in distinguishing between the white Christ and the black Christ.  The book’s fifth and final chapter focuses on the theological implications of the unique black womanist perspective on lynching.  Unlike men, who often were able to run away from lynching, moving on to another county or state, black women were able to run away as easily, leaving their children behind.  Cone draws here largely on the work of Ida Wells and Fannie Lou Hamer.  This chapter, Cone notes is an important piece of the “social context of black people’s struggle for justice” (151).

So, where do these far-ranging reflections on the cross and the lynching tree take us? In the book’s conclusion, Cone minces no words in tackling this question:

The Cross and the Lynching Tree is a challenging book, one that shatters the comfortable silence of the prevailing voices (like Niebuhr) in American theology. But because it does so, it is an important book, forcing us to come to grips with a violent part of our past that is all too often hidden away.  Cone is right that the questions he asks here are essential ones if we are to progress toward racial reconciliation in America, and especially among our churches.  I recommend reading this work in conjunction with Carter and Jennings’s books, in order to set it in a context that goes beyond the United States, but it is crucial – pardon the pun – that this book be read and discussed, in order that we might immerse ourselves deeper into God’s mission of reconciling creation.