A Story of Growth

For All Who Hunger: Searching for
Communion in a Shattered World

Planting a church isn’t easy. Anyone who has attempted to do so will surely tell you that. The reasons behind that difficulty are numerous: finances, convincing people that joining a new venture will be worthwhile, finding the space to meet, being comfortable with failure. But perhaps most importantly, keeping the fire under your vision when one or more of these things fall apart or take longer to develop than imagined is the trickiest act of all.

Emily M.D. Scott writes of the ups and downs of planting a church in New York City known as St. Lydia’s. It is notable by many other churches for its pioneering of a movement known best as “dinner church,” in which a faith community centers its worship life around the creation and sharing of a meal. The church may hold a certain place of esteem in many circles now, but For All Who Hunger pulls back the curtain on just how difficult establishing this imaginative expression actually was.

The natural place for Scott to begin is in how she felt the call to pursue this way of being church. She tells of it happening while navigating two related yet separate faith groups: the dedicated attendees inside the walls of the large and busy church at which she worked at the time, and the people she’d meet on the subway or at bars who would tell their stories of feeling out of place in traditional expressions of spirituality and community. The question of how to better engage the latter, Scott writes, “lives just below my rib cage,” where it “gestates” (35). She expresses a longing to reach those who wonder about God, but whose stories and questions cause them to balk at darkening the thick wooden doors of her place of ministry.

The idea sounds wonderful, of course. And she even finds another church in the city willing to support her idea. “The part no one ever talks about is the humiliation” (53). After a promising start, attendance at the dinner church begins to dwindle. Eventually, the sponsoring church encourages them to move on. They suddenly need to find a new place to meet, and figure out new ways to re-engage people in what they’re attempting. After the shine wears off and all St. Lydia’s has is the struggle to keep faith in uncertainty, the idea loses a bit of its romance.

Of course, Scott isn’t attempting to write anything romantic, and hardly any of what she shares comes off that way. Throughout her book, she is honest about her own doubts about whether any of this will work, even if she knows that the underlying need warrants the attempt. At one point, she tells the story of a cold December night where a makeshift marching band from the church wanders through the neighborhood to sing carols and tell the Christmas story. It sounds like a fun and quirky idea, but the freezing weather and indifference of onlookers rendered the actual execution a much more miserable experience. In between the successes, there is the hardness of ideas that don’t quite pan out.

That’s not to say that there aren’t successes shared in For All Who Hunger. Shortly after St. Lydia’s finds a more permanent home in an unfinished storefront, Scott tells the story of a young man baptized during one of their first services in that space. The group holds candles and sings hymns of joy while the candidate stands in a metal basin. It is a story of beauty in imperfection; of deep meaning using what is on hand.

In another instance, a theatre troupe in desperate need of a place to store costumes before staging outdoor performances winds up using St. Lydia’s, and the actors end up observing the congregation celebrating communion while they wait to use the bathroom. It is an unexpected way in which the church connects to the neighborhood around them. The Christmas marching band might not have quite panned out, but other instances did.

Wrapped up in Scott’s imperfect experience of beginning a church is her experience of loneliness and self-discovery. She peppers her theological reflections and St. Lydia’s stories with her attempts to find love and companionship, and the difficulty she has in doing so. She recounts time after time when people she meets for dates are not fully comfortable with her role as a pastor. She writes of her discouragement in seeking companionship. This loneliness undergirds her ministry at the church.

As the book winds down, Scott seems to discover several things in quick succession, and the catalyst seems to be a sabbatical that she is able to take after so many years with St. Lydia’s. She begins to discover how she best feels comfortable in her own skin and sheds all that which is inauthentic to her own self-expression. She finally discovers the pleasure of someone’s company and how much newfound vitality it causes within her. And she also discovers that it’s time to move on from the ministry that she began so many years earlier.

Starting a new church is a lot less glamorous than many realize. It turns out that figuring out who you are is just as messy. Scott has written a story about both simultaneously, and many may be able to find their own messiness in what she shares. 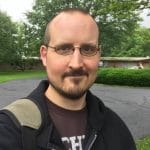 Jeff Nelson serves as Minister for Ministerial Calls and Transitions at the national setting of the United Church of Christ. His latest book is The Doctor and the Apostle: Intersections Between Doctor Who and the Letters of Paul (Wipf and Stock, 2020). He regularly blogs about ministry, spirituality, and pop culture at coffeehousecontemplative.com.