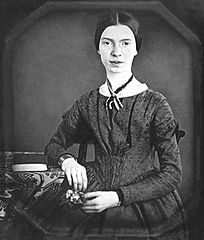 Today is the Birthday of Emily Dickinson (born 1830)…

And in commemoration, we are offering a free download of an ebook edition of her COMPLETE POEMS,  which are described in the book’s preface: “But the main quality of these poems is that of extraordinary grasp and insight, uttered with an uneven vigor sometimes exasperating, seemingly wayward, but really unsought and inevitable.”

“Born in Amherst, Massachusetts, to a successful family with strong community ties, [Dickinson] lived a mostly introverted and reclusive life. After she studied at the Amherst Academy for seven years in her youth, she spent a short time at Mount Holyoke Female Seminary before returning to her family’s house in Amherst. Thought of as an eccentric by the locals, she became known for her penchant for white clothing and her reluctance to greet guests or, later in life, even leave her room. Most of her friendships were therefore carried out by correspondence.

While Dickinson was a prolific private poet, fewer than a dozen of her nearly eighteen hundred poems were published during her lifetime. The work that was published during her lifetime was usually altered significantly by the publishers to fit the conventional poetic rules of the time. Dickinson’s poems are unique for the era in which she wrote; they contain short lines, typically lack titles, and often use slant rhyme as well as unconventional capitalization and punctuation Many of her poems deal with themes of death and immortality, two recurring topics in letters to her friends.

Although most of her acquaintances were probably aware of Dickinson’s writing, it was not until after her death in 1886—when Lavinia, Emily’s younger sister, discovered her cache of poems—that the breadth of Dickinson’s work became apparent. Her first collection of poetry was published in 1890 by personal acquaintances Thomas Wentworth Higginson and Mabel Loomis Todd, both of whom heavily edited the content. (via Wikipedia)

In remembrance of her birthday, we are pleased to offer her Complete Poems as our Freebie of the week…