The Work of Repair

Tell me what you think the main point is Luke’s account of Jesus’s encounter with Zacchaeus, and I’ll make a well-informed guess about what you’ll think of the argument advanced by Duke L. Kwon and Gregory Thompson in their book, Reparations: A Christian Call for Repentance and Repair. Is the focus on the tax collector’s height? On the fact that he had to climb a tree to catch a glimpse of the man he’d heard so much about? Or do you notice the grumbling crowd, shocked that Jesus would invite himself to dine with a notorious sinner? If these are the sorts of details which arrest your attention, it’s likely that the future envisioned by pastors Kwon and Thompson for the church will surprise or shock. But if it’s Zacchaeus’s response to Jesus which rises to the top (“Look, Lord! Here and now I give half of my possessions to the poor, and if I have cheated anybody out of anything, I will pay back four times the amount.”), then you’re primed for the authors’ vision of repentance and repair.

This is a vision, as the title makes clear, for the church to take on the work of reparations in response to generations of racism against African American people. Reparations, in the authors’ view, is a twofold process of restitution for what was stolen and the restoration of those who were stolen from. I imagine that many of Kwon and Thompson’s readers will hear the argument for the church’s participation in reparations as a new development in the larger, more familiar conversation about racial reconciliation and justice. More skeptical readers might imagine an innovative break from the Christian responsibilities of forgiveness and mercy.

The authors show convincingly that, for American Christians, the struggle over reparations is neither new nor innovative. Early on, we are introduced to Jourdon Anderson, a formerly enslaved man of African descent who, during the Civil War, liberated himself and his family from slavery in Tennessee. His former slave master, Colonel Patrick Anderson, had found it impossible to keep up his estate without the labor of those he had enslaved and so, in 1865, he wrote to the man he had previously held in bondage and asked for him return to help with the harvest. In response, Jourdon wrote that he’d be willing to consider returning if his former enslaver would first send him $11,680, the amount he figured he and his wife were owed for their years of stolen labor. There would be no return without repair.

On a Sunday morning one hundred years later, James Forman, a leader of the Student Nonviolent Coordinating Committee, marched down the aisle of Riverside Church in New York City before turning to the congregation and reading from the “Black Manifesto.” Written by Forman and adopted by the National Black Economic Development Conference, this document explained why white churches and synagogues owed reparations to African Americans and outlined how much – $500,000,000 – was required and where it was to be directed. For James Forman, Jourdon Anderson, and many other African Americans, reparations are a logical response to hundreds of years of plunder.

Significantly for the authors is framing the impact of a culture of white supremacist racism in terms of theft- theft of truth, power, and wealth. The theft of truth includes how our racist society has consistently lied about the identity of African Americans (the authors identify animalization, demonization, and infantilization) along with the theft of history by which some elements of American history are romanticized and others are erased. The theft of power refers to the ways both personal and political power have been robbed of Black citizens. Finally, the authors identify two ways wealth has been stolen: extraction and obstruction. A white supremacist lens allowed Europeans to view “new” lands and their peoples as objects from which resources could be extracted. And time and time again, Black wealth has been obstructed, whether through unjust legislation or extrajudicial terror.

Like author Ta-Nehisi Coates, whose article in The Atlantic in 2014 reignited a national debate about reparations, the authors understand the plundering of Black people by a white supremacist society as essential to any accurate understanding of America. “America begins in black plunder and white democracy,” writes Coates, “two features that are not contradictory but complementary.”

It’s one thing, of course, to acknowledge how a culture of white supremacy has wreaked havoc on Black communities over the centuries. It’s another thing entirely to assume that the church – white churches – have a particular responsibility to repair the damages done by generations of theft. But this is precisely what Kwon and Thompson, Korean American and White respectively, urge the reader to consider. This responsibility has to do with the church’s unique mission which can empower people to seek repair, its troubled history which reveals far too many instances of complicity with racial injustice, and a moral tradition which provides the necessary spiritual resources for such difficult work.

As an argument for the church’s participation in the work of repair, Reparations is compelling. The authors root their vision so thoroughly in Scripture that by the time we approach the end of the book and the more practical elements of repair, the invitation feels natural. Of course this is what the church is meant to be about! Equally important is how Kwon and Thompson refuse to reduce this important conversation to money: Who gets paid? How much? Who pays? By excavating the cultural nature of white supremacist racism, they successfully show the widespread, generational, and material impact of this systemic sin. Rooted in Christian identity, this clear-eyed telling of history shifts reparations from a radical impossibility to a reasonable responsibility.

So, how would a church actually go about the work of repair? Rather than suggesting a roadmap or a list of steps, Reparations ends with spiritual commitments and practices of repair. It’s easy to imagine a local church gathered around these last pages, asking themselves what it might look like to grow into a community engaged in repair. Questions of material compensation – money! – would certainly come up in these conversations, but not aside from wider questions of formation and maturity. To truly do the work of repair, a church, particularly a white church which is only now waking up to the generations of theft inflicted upon our Black sisters and brothers, must first become a people of repair. 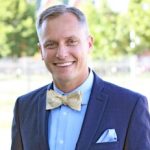 David W. Swanson is the pastor of New Community Covenant Church in Chicago’s Bronzeville neighborhood. He is the author of Rediscipling the White Church. Read more from David at dwswanson.com.