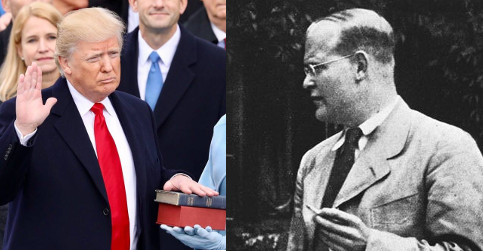 Tomorrow (Feb. 4) is the birthday of Dietrich Bonhoeffer…

In the Trump era of propaganda (e.g., “alternative facts”) and violence and oppression toward anyone who is not a white heterosexual male, we would do well to return to the writings of Dietrich Bonhoeffer — not just the wrongheaded spin of some who have written about Bonhoeffer (AHEM, Eric Metaxas), but his actual writings themselves.

Three Ways in Which the Church
Should Respond to the State

A state that threatens the proclamation of the Christian message negates itself. There are thus three possibilities for action that the church can take vis-à-vis the state: first, … questioning the state as to the legitimate state character of its actions, that is, making the state responsible for what it does. Second, is service to the victims of the state’s actions. The church has an unconditional obligation toward the victims of any societal order, even if they do not belong to the Christian community. “Let us work for the good of all.” (Gal 6:10) These are both ways in which the church, in its freedom, conducts itself in the interest of a free state. In times when the laws are changing, the church may under no circumstances neglect either of these duties. The third possibility is not just to bind up the wounds of the victims beneath the wheel but to fall [ourselves] within the spokes of the wheel itself. Such an action would be direct political action on the part of the church. This is only possible and called for if the church sees the state be failing in its function of creating law and order, that is, if the church perceives that the state, without any scruples, has created either too much or too little law and order. It must see in either eventuality a threat to the existence of the state and thus to its own existence as well.