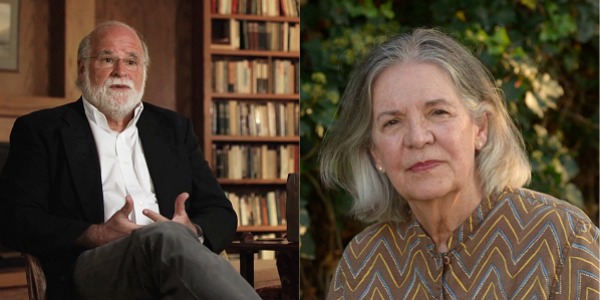 A conversation about faith, writing, community,
solitude, and the unfathomable ways of God.

Diane Glancy and Daniel Taylor are among my favorite contemporary writers; they are also my dear friends. I met Dan in the fall of 1968, in the first quarter of a Survey of English Lit course at Westmont College in Santa Barbara, California. Diane and I met in the spring of 1996 at the Festival of Faith & Writing at Calvin College (as it was then) in Grand Rapids, Michigan. Dan’s most recent book, published in May, is Woe to the Scribes and Pharisees (Slant Books), the third in his Jon Mote series; I reviewed it here. Diane’s most recent book is Island of the Innocent: A Consideration of the Book of Job (Turtle Point Press); I wrote about it here. I’m grateful that they were willing to have this conversation.


John: A lot of talk about writing takes place at a high level of generalization, but much of the actual work consists of small incremental choices. Could you (first Diane and then Dan) give us an example from something you are working on right now (with a little background on the nature of the book-in-progress to set the context)?

Diane: I’ve been working on a novel, When Everett Was Still Dancing, about a traveling gospel musician in Kansas who bemoans the back roads he travels to rural churches, until he realizes they are the same kind of roads Jesus traveled. I have worked on it off and on for ten years. I can’t quite find the conflict and its resolution. The novel keeps moving on with more voices, but not a lot of plot. I worked on it over the Labor Day weekend. I didn’t have anything else to do. I’m grateful for words. They get me through a lot.

I tired of the novel again, and this morning I worked on a piece for an anthology, Tribal Wildlife Management. Since I don’t live in the tribal community, I went back to the beginning: Adam naming the animals as the first act of creative thinking. It’s in three parts:

In the Beginning: The Importance of Wildlife in the Development of Human Thought

The Need for Wildlife Regulation—

It is a strange piece, and probably not what they want, but I have a first draft using a story from Durbin Feeling’s Cherokee Narratives (University of Oklahoma Press, 2018), about a bilocating dog, “Two Dogs in One.” It followed two brothers home one night who were not traveling together. And I went on to talk about the name of the animal and the animal itself as the two in one. I am interested in these feral parts of language. Associative. A lovely journey through the morning. I actually started taking notes on it a couple of days ago (which is why I knew I was getting bored again with the novel).

I also just looked over a short story once again.  “Decoupage for the Present Age in Three Dimensions.” Another piece in three parts, about a woman who decoupages names of Native children who died in boarding schools beginning in 1892. I actually saw online the long list of names, ending in 1972. I printed it out, and those names have been haunting me for a while.

Then there’s a short story competition, Zoetrope, I have entered in the past and never got anywhere.  The award is a visit with agents for the top three entries. I have little hope of winning, but I thought it would help me continue with the novel, When Everett Was Still Dancing. If “Decoupage” finishes in the top three, I would have to complete the novel.