A Necessary Reorientation
of the Evangelical Gaze

This summer, Lin-Manuel Miranda’s Grammy, Tony, and Pulitzer Prize-winning musical, Hamilton, found its way into the homes of millions of viewers through Disney’s new streaming service. The story chronicles the life of America’s first Secretary of the Treasury, Alexander Hamilton, through various musical numbers that range in style from rap to hip hop, R&B to Broadway hits. As Miranda is known for saying, “It’s a story of America then told by America now.” Indeed, this is partly where Hamilton derives its power and influence; Miranda is engaging with America’s founding myth. The fact that he plays with the story’s historical facts—Angelica was married when she met Alexander, for instance—does not matter from a literary point of view since the play itself is not a retelling of American history as much as it is the retelling of America’s founding myth, a myth that reinforces American ideals. It is the story of rugged individualism, pioneering capitalism, and American exceptionalism.

While disillusionment with these ideals has surfaced throughout American history—through racism, World War I, Vietnam, etc.—these fundamental tenets of the American identity still shape the national fabric. This is the power that myths have over a culture. These ideals flourished yet again after American success in World War II, and they became the ideological battleground when Cold War tensions began to increase. (Enter stage right: Evangelicalism.) It was at this time that Christian evangelicalism began to wed itself to American idealism. This is one phenomenon that David R. Swartz writes about in his book, Facing West: American Evangelicals in an Age of World Christianity. Similar to Lin-Manuel Miranda’s Hamilton, at least in one sense, Swartz stares at the fundamental elements of the American myth, then he considers their adoption by modern evangelicals as well as their influence in both the past and current religious and political landscape. Unlike Hamilton, however, Swartz holds to the historical narrative, providing ample and thoughtful support for his analysis while addressing challenges to his thesis with honesty and understanding. He also refuses to accept the belief that these ideals were solely responsible for shaping evangelical Christianity at home or abroad.

Swartz’s primary argument is this: contrary to the narrative of populist evangelicals, American evangelicalism has not just shaped its global neighbors, but has also been shaped by them. This idea, what Swartz terms reflexivity, has influenced many aspects of American evangelicalism, including its views on social justice, the supernatural, and international missions work. In addition to this argument, Swartz also contends that these global encounters don’t often fit within the established American political categories of progressive and conservative; American evangelicals will be increasingly shaped by these global encounters, both at home through immigration and abroad through continued interactions with the global South; and, currently, there is a large populist-elite divide within evangelicalism between those who still cling to these American ideals and those who are increasingly disillusioned by them. (This last point, in particular, speaks incisively to the current political climate, one in which evangelicals can find a more centralized front in the chants of “America First” over the untethered tradition and authority of their local ministers.)

An insightful and important history, Swartz begins his book in 1945 at Soldier Field, where 75,000 people attended a Youth for Christ rally at which fervent and inspired youths “were released to free souls, people, and enterprise around the world in the service of Christian Americanism.” This new evangelicalism, in other words, recognized its place in the “‘American Century’” and was prepared to “reinvigorate the missionary enterprise,” freeing people spiritually, politically, and economically. This would become the dominant viewpoint of American evangelical leaders, congregations, and organizations at the time, and the resonant ideals it carried with it—exceptionalism, individualism, capitalism—continue to influence American Christians today.

After explaining the Cold War era paradigm that evangelicals used to view the world and their missions, Swartz methodically traces various global encounters that have shaped evangelicalism. From social justice to civil rights, critiques of colonialism to new methods of economic development, Swartz outlines the impact that global Christians have had on American Christianity from 1958 to 2007. He also lists two present “disorientations” that are pushing up against modern evangelical understandings of human trafficking and immigration. The former disorientation contends that the common “rescue” mission ideology of anti-human-trafficking NGOs is neocolonial, ineffective, and inconsistent. The latter disorientation focuses on the fact that Christian immigrants to America are simultaneously reinvigorating spiritually poor areas and reminding wealthy, individualistic, and technocratic white American Christians about fundamental elements of the biblical faith.

There are, of course, counterarguments to the new narratives that Swartz offers in Facing West: American Evangelicals in an Age of World Christianity. Willingly, however, he presents many of these arguments himself, ending each chapter by acknowledging the limitations of his argument and reasserting his central claim from the chapter. He even states in his introduction that this book is meant to offer a “suggestive, not comprehensive” look at the history of evangelicalism. But suggestive it is, and while he is honest about the limits of his assessment, he is also responsible, balanced, and convincing with his evidence and claims. By providing a nuanced perspective, Swartz also offers a valuable example of what it means to listen honestly and respond thoughtfully, and that lesson alone is worth the price of the book. Besides this, however, Facing West offers evangelicals valuable insights about the history of the movement and the elements that turned their attention eastward. More importantly, it inspires a necessary reorientation of the evangelical gaze; such a reorientation simultaneously offers valuable insights on a wide array of issues and serves as a mirror for American evangelicals, helping them spot their own faults, their own planks. As Swartz reminds his readers, theology (like history), “is always constructed in local, physical, and historical contexts. It matters where voices come from.” By providing these various and refreshing viewpoints, Swartz is also making space for the narratives that have been pushed to the sides by more dominant cultural stories—a much-needed gesture in a divided time. 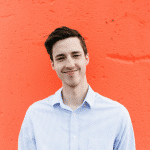 Nathan Geeting has a B.A. in secondary education and a B.S. in biblical studies. He currently lives in Durham, North Carolina, where he teaches English to a lively class of sixth graders. Before that, he lived and taught in his hometown of Grand Rapids, Michigan.