Love on a Human Scale:
The Gospel According to Ivan Illich

Every now and then a book comes into my life that puts me in a happy dilemma: I want to lend it to all my friends, but I don’t want it to leave my house. Ivan Illich: An Intellectual Journey is a labour of love by Illich’s long-time friend and co-conspirator, David Cayley. At 552 pages, its heft reminds me of the boxes of “a good, but inexpensive wine” that Illich managed to write off as a teaching expense. This opus represents many, many evenings of intelligent, friendly and finally life-changing dialogue that culminate in a  near-symphonic quality.  Cayley’s deep understanding and clear prose draws out a complex, balanced harmony of themes that to the casual reader of Illich could seem eclectic. What does medical overreach have to do with the 12th century innovation of silent reading or the New Testament concept of the Antichrist or the dissolution of gender as a capitalist phenomenon, for heaven’s sake?

In a confusing and troubling time, this book gave me the permission to weigh the harm done by coronavirus against the harms done in the fight against it, a model to help me accept and be grateful for some of what medicine provides, and still have the confidence to resist the hysteric shunning of my unvaccinated friends. In the wake of the discovery of more than 1,308 unmarked graves for Indigenous children who were coerced into residential schools and never came home again, the book helps me name the totalitarian hubris of a church that thought it could “do what God cannot, namely manipulate others into their own salvation” through brute force, child abductions and mind control, and repent of such hubris through a closer walk with Christ, rather than by running away from my spiritual inheritance.

One of Illich’s mottos was “I fear the Lord is passing me by.” Illich receives in Jesus’s parable of the Samaritan a radical freedom to encounter the Other in the human other—an opening to friendship that cannot be guaranteed, a surprise that cannot be institutionalized. His other motto was Corruptio Optimi Pessima—the corruption of the best is the worst. Glorious innovations tend to have dark shadows. A faith in which there is neither male nor female, neither Jew nor Greek, neither slave nor free is uniquely prone to an imperialism that flattens Indigenous cultures and drives men and women out of the complementarity of gender into the competitive, unidimensional arena of sex.

This last idea risks generating much more heat than light, and a book review by a white man about a biography by a white man about another white man seems unlikely to help the cause. I may just be securing my copy from being borrowed! At the risk of mansplaining, I will spill a little more ink on what may be a stumbling block for many in accessing Illich. Many of Illich’s friends advised him against publishing his thoughts on this matter, and when Gender came out in 1982 it did mark a fall from grace for Illich among the New Left.

Cayley’s chapter on “Gender” takes care to first understand what Illich had to say before critiquing some of his nostalgia and gender essentialism, a courtesy that was not granted him by early reviewers. Cayley summarizes Illich’s argument as follows:

“Illich speaks loudly against equality as sameness. But he also speaks loudly for equality in its sense of equity, arguing that most women suffer irremediable disadvantages in a realm of universal circulation and competition. The two points are connected. Illich claims that idealizing equality may allow some women to rise to new heights of wealth and influence but that it will hurt many more—by lowering the status of every form of sustenance that occurs outside the cash nexus in which equality finds its measure, by fostering an illusory sense of opportunity, and by inviting those who fail to seize these opportunities to blame themselves. His analysis of feminism, in this respect, took the same form as his analysis of every other modern institution that he explored—it incites envy and delivers frustration. Only by reversing economic growth, unbuilding the global megalith, and restoring human scale will the majority of women regain their dignity, he says, because only then will the contribution of those who have been shunted aside in the rat race begin to matter. This is the sole sense in which he speaks against equality: equality-as-justice, he says, cannot be achieved without a firm rejection of equality-as-sameness.”

Illich is on the lookout everywhere in his work for one-size-fits-all solutions that ignore the bonds and bounds of our bodies, whether the social bodies of community and culture, or the physical bodies of women and men. Visions of justice that require everyone to have the same kinds of jobs, visions of health that require everyone to take the same kind of medicine, visions of education that require everyone to have the same kind of standardized credentials are for Illich a liberal power fantasy with an ugly underbelly, a perversion directly inherited from a church that could envision the coming of the Kingdom as the mass conversion of global humanity into a single catechism and a single rite under a single worldly authority with divinely underwritten supremacy. Such a universalism inherently corrodes human freedom and erodes “the soil of friendship” which is always limited and local. “As long as you think of the world as a whole,” Illich said, “the time for human beings is over.”

Illich is trying to protect islands of the homegrown, the homemade and the homespoken. I think of feminist friends who make homegrown pickles with their homeschooled children when they could easily get jobs that would pay for cheaper pickles, cheaper child care and then some. Perhaps at the kitchen tables of these mothers, Illich’s analysis of gender has “reached the hour of its legibility,” as is hoped by Giorgio Agamben, another male commentator. Besides the voice of Illich’s colleague Barbara Duden, and a comment from Cayley’s wife, we hear little sympathetic commentary from women in this chapter. That is too bad.

Illich calls this domain of the homemade “the vernacular,” reviving an old Latin adjective that could be applied to one’s mother tongue as well as to a cow raised at home instead of acquired at the market. He hopes such islands can align in an “archipelago of conviviality”—a chain of islands where life is still livable on a human scale, where we can love one another as neighbours and renounce the kind of “care” that implicitly takes the point of view of a systems administrator. It is not that Illich is against institutions and systems organized to achieve social goods, but as a loyal dissident of the Roman Catholic Church, he is acutely sensitive to the harms done in the name of good, and of the importance of limits and humility for those of us who get caught up trying to save the world, whether with sacred rites or secular ones. “Risk awareness,” Illich said to Cayley late in life, is “the most important religiously celebrated ideology of today.” That was before the coronavirus lockdown.

Illich blesses the missionary impulse at the same time as he chastens it. He understands that whether inspired by Jesus or by a medical breakthrough, people will want to share their good news. But he sees with near-clairvoyant power how the good news is accompanied by a terrible danger. Humans inspired by visions of God’s will done on earth as it is in heaven all too easily construct an artificial, man-made world from which there is no escape.

As a reader of Illich via Cayley, I find myself more deeply drawn into the good news of Jesus, and more able to discern and rebuke the spirits that dress up like Jesus while perverting his good news. I find myself both grateful for a vaccine that reduces the symptoms and spread of a nasty virus, and alert to the shadows of a campaign of global vaccine compliance. When a frightened neighbour who does not attend my church recently reached out to me to ask if I could write a religious exemption for her son so that this unvaccinated young man could attend college this fall, I said yes. As I did so, I silently thanked Illich and Cayley for helping me get my head around what the hell is going on in this strange time and how in heaven’s name such a yes to my neighbour could possibly be a yes to Christ. 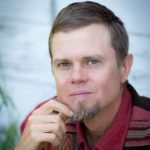 Marcus Peter Rempel and his family live at Ploughshares Community Farm in South St. Ouen’s, Manitoba. A son of Mennonite mission workers, Rempel has been a cross-culture kid all his life, an insider and an outsider wherever he lives. Professionally, he has been an occupational therapist, a mental health clinician, a hydro justice worker, a market gardener and a pastor. Find him online at: MarcusPeterRempel.com