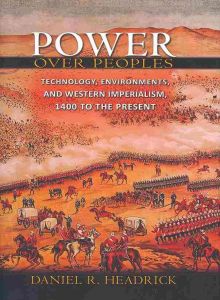 When Technologies Take on a Life of Their Own.

A Featured Review of

Power over Peoples:  Technology, Environments, and Western Imperialism, 1400 to the Present

In an age of iPads, digital uploads, drone surveillance, and debates over the limits of the Internet, the question of whether or not “technology” is an unlimited good remains an open question. Proponents of the most recent iteration of the technology revolution will decry the naysayers as “Luddites”, while the inheritors of  Wendell Berry and Jacques Ellul will continue to remain suspicious of technology’s pervasive effects within society, and (more perniciously) over against society. As Wendell Berry has argued, technology may be an aid to communal life, or it can destroy it; the latter use of technological advances–the use of arrows in Genghis Kahn’s conquest of Asia, or the use of gunpowder to colonize Africa–remains the dark side of technological advances.

This last point–the relationship between technology and the subjugation of people is the subject of Daniel Headrick’s Power over Peoples: Technology, Environments, and Western Imperialism, 1400 to the Present, in which we are presented with an account of western imperialism, and its relationship to technology. Headrick notes that the common assumption is that imperialist cultures flourish because they are able to make use of superior technology. Such a narrative is too facile, Headrick argues, for it assumes that superior manipulation of natural elements (technology) always results in a successful conquest.

Proper accounting of technology within the history of expansion of the West has to take into account three factors, Headrick argues (6): how a technology mastered a particular non-Western environment, the nature of the technology itself, and how the non-Western society responded to the use of a particular technology. In nine case studies, Headrick takes his readers on a whirlwind tour through the history of Western expansion, showing the role that technology has – and more significantly, has not – played.

The work opens with an evaluation of the “discovery of the oceans, examining the development of nautical technology necessary to master the oceans; while itself not a chapter on the subjugation of people as such, the chapter contributes, however, to Headrick’s overall thesis that the use of technology is not simply how it is used against people, but to master certain environments. Thus, the development of the sextant, compass and cartography were some of the major breakthroughs technologically, not only for the later conquests they will enable, but because of the way they mastered a previously unmasterable environment – the endless seas.

With chapter two, we begin to see how the development of certain technologies, while enabling dominance of some environments, were not sufficient in all circumstances. As the West attempted to expand into the Arabian peninsula and India, technology well-suited for deep waters foundered before superior land-based technology. A similar point emerges in other case studies–superior technology in one environment does not always lead to conquest. In his chapter on the emergence of colonialism, for example, steamboat technology succeeded where earlier nautical technology failed, enabling Europeans to overcome the shallow-water enviornment. Similarly in that period, weaponry appropriate for subduing an African populace failed in Afghanistan due to vast differences in terrain.

Headrick’s narrative becomes stretched at points when explaining, for example, the wars over the Americas, where neither geography nor technology become the explanatory key, but disease. Here, Headrick describes disease as a kind of technological preparation by the Europeans – that Europeans introduced a new element into the environment which turned the environment against its initial inhabitants. While this way of viewing disease (as turning the environment against its own inhabitants) is an invigorating way to conceive of epidemiology, it seems a slight stretch for the narrative Headrick is constructing. That being said, chapter 6’s description of medicine’s ability to overcome previously unencountered illnesses such as malaria, proved much more convincing, and serves to broaden our thinking about the limits of “technology”.

Click on the link below to continue reading on page 2…