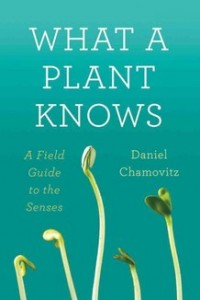 Considering the Lilies of the Field

What A Plant Knows: A Field Guide to the Senses

Several years ago members of my church and I planted a new garden, creating four long borders to surround a lawn next to our sanctuary.  Along one side was a large stone arch and I planted a climbing Hydrangea at the base to soften the imposing effect. I asked a fellow parishioner, who happened to be an esteemed engineer, if he could use his special drill to secure some sort of tack to attach the climber’s stems to the arch, quickly explaining that if we didn’t press the Hydrangea firmly against the stone surface, the plant might think it was a shrub, not a climber, and stay squat and bushy. He looked at me like I was the flakiest of gardeners – I still cringe when I see him – but I knew from experience that I was right.

Thanks to a recent volume, What a Plant Knows: A Field Guide to the Senses, I now know that I could have said “climbing Hydrangea generally need thigmomorphgenesis (try that in Scrabble) to grow upwards, and I need your help to make that happen.” Authored by Daniel Chamovitz, the Director of the Manna Center for Plant Biosciences at Tel Aviv University, who trained at Columbia, Hebrew University and Yale, What a Plant Knows is a fine example of readable science, a pleasure for the home gardener, the scientist and the generally curious. Amalgamating a breadth of credible research, anecdotes and humor, Chamovitz explains, chapter by chapter, what a plant sees, smells, feels, hears, remembers and knows of its own locale, but readily acknowledges “anthropomorphism of plant behavior left unchecked can lead to unfortunate, if not humourous, consequences.”(140).

Using daily experience as his starting point, Chamovitz gleefully highlights when plants are the more impressive.  Did you know that some plants can “feel” an added weight of just .25 of a gram, while humans need almost 2 grams to realize something is touching their skin?   Were you aware that some plants have eleven different kinds of “photoreceptors” (which Chamovitz likens to an antenna absorbing radio waves) while humans only have three?  Plants can “see” a much larger spectrum than we do but they don’t visualize in pictures and they don’t have a brain that interprets what they see.  Instead, they use light and “vision” as a multifaceted cue for growth. For a sense of touch, Chamovitz unpacks concepts like proprioception, a process which “involves the coordinated input of signals from the inner ear, which communicates balance,” (93) along with signals from specific nerves throughout the body that communicate position, clarifying that this is how plants ensure that shoots grow up and roots grow down. For the non-scientists amongst us, Chamovitz adds an anecdote about his own knee injury in which he temporarily lost the proprioceptive positioning signaling of his foot and eventually regained it as “his brain began to reintegrate information from the other nerves in my lower leg.” (94)  This is a scientist who wants to ensure he is a good communicator.

Similarly, when Chamovitz illustrates how plants smell, he explains “when we put a ripe banana in a bag with a hard pear, for example, the banana gives off ethylene, which is ‘smelled’ by the pear and the pear quickly ripens.  The two fruits are communicating their physical states to each other.”  (30-31) For the more curious, he adds, “But ethylene is particularly important for the plant aging as it is the major regulator in plant senescence (the aging process that produces autumn foliage).” (31)

As he winsomely and carefully as he teaches a science lesson, Chamovitz makes two additional contributions. What a Plant Knows is a polite rebuttal, refuting the lore of the acclaimed New York Times Bestseller  (and later documentary) but scientifically mushy, The Secret Life of Plants written in 1973.  With a range of respected data in hand, he sets the record straight on what scientists quantifiably know about plants’ “senses,” and what they do not know. We learn once and for all that plants do not hear (and thus have no preferences for Led Zeppelin or Mozart), nor is there any evidence that plants need to hear to adapt or to thrive. Similarly, the author delivers the definitive explanation of how a Venus flytrap plant knows to chomp tight on only certain insects and why a Mimosa tree’s leaves dramatically droop upon contact.

Secondly, Chamovitz utilizes his work to remind us how dependent we are upon plants and their capabilities. He writes:

We wake up in houses made of wood from the forests of Maine, pour a cup of coffee brewed from coffee beans grown in Brazil, throw on a T-shirt made of Egyptian cotton, print out a report made on paper, and drive our kids to school in cars with tires made of rubber that was grown in Africa and fueled by gasoline derived from cycads that died millions of years ago. … mighty Sequoias are the largest singular, independent organism on earth, algae are some of the smallest and roses definitely make anyone smile.” (6)

Subtly substantiating why we might read a book like this, the author shows that these ubiquitous organisms not only make so much of our day lives possible, they provide endless verification of the Creator’s unlimited creativity and complexity. Plants, are a gift, not just as signals of love on Valentine’s Day and flavorful corn on the 4th of July, but armed with useful science for other facets of life, practicality and blessing.


For the more serious readers, there is an excellent section of “Notes” or enlarged bibliography and that increasingly rare aid, a detailed index.   Perusing the index, you can find how Darwin carried out the first Venus flytrap experiments and why some plants prefer to be cuddly with tomatoes instead of carrots.  For the visually inclined, there are nearly thirty simple but excellent illustrations of the plants and processes the author discusses.

Chamovitz is an enthusiast of evolution – he speaks of it admiringly, but also appreciatively, leaving it well possible that there might be a creator of this remarkable process, rather than arising as a matter of chance.  For those less comfortable with evolution as part of God’s design, his tone is thoughtful, not polemical.  Another frustration with the book might be for home gardeners, who could feel there are too many words like beta-mycene, circumnutation and electrochemical gradients. Conversely, academics might not find the abundance of data they prefer, or recoil at the possible overuse or elasticity of metaphors to illustrate processes.

Considering the lilies of the field takes on new meaning – not only for the testament to God’s care for us, but to the work of genius imbued in those wondrous flowers. Daniel Chamovitz’s What a Plant Knows not only teaches us about plants themselves but also attests to a broader reality that if we have a Creator who can create this level of depth, precision, genius and extensiveness in creation, He can handle humans and the mess we have made of the world exceptionally well.

Julie Lane Gay is a former nursery owner and writer whose work has appeared in Fine Gardening, Horticulture, and a number of other publications.