On the Spectrum: Autism, Faith, and the Gifts of Neurodiversity
Daniel Bowman, Jr.

My little brother Caleb was diagnosed with autism in 1998, when he was five. Insurers in Ohio refused to give him medical insurance; kids at church threw rocks at him on the playground. He spoke very little, screamed in restaurants, and told us over and over again that he didn’t want to grow up, or sometimes, even live. All we could see was a child who seemed 30% charmingly quirky, and 70% miserable; all we wanted was for him to be better, and happy. From our perspectives, he couldn’t tell us what he needed himself. Scores of book authors and publishers apparently felt the same thing. Many books on autism written in the early years of the 2000s fell into the “voice for the voiceless category:” stories about autism told by someone with the language skills to write it. Exceptions to these memoirs certainly existed (Temple Grandin’s Thinking in Pictures and Daniel Tammet’s Born on a Blue Day come to mind), but most of these memoirs were written by parents or doctors. I wish that in 2003 (or even 2013) Daniel Bowman’s On the Spectrum: Autism, Faith and the Gifts of Neurodiversity had been in the landscape of autism memoirs and advice books we were reading. This book of essays and meditations on autism demonstrates and advocates for “passing the mic” to the supposedly voiceless, and realizing they have voices—clear, creative, insightful, humorous voices—after all.

On the Spectrum: Autism, Faith and Neurodiversity deviates from the autism memoir in both form and content. First, Bowman’s story stands out by its somewhat ordinariness—he is an Upstate New York-raised, Midwest-based professor at a small college; he also came to his diagnosis as an adult, not a child. He is not a savant, or nonverbal, but someone who might “pass” for ordinary while seeing and experiencing the world from a distinctly neurodiverse perspective.  As for form, his book is written in standalone essays, rather than traditional chapters, and these essays range from childhood narratives to placemaking in the Midwest to spiritual community building. This latter point is particularly interesting, as On the Spectrum is the first book about autism I’ve read with an overtly spiritual lens. Pastors and community members will particularly benefit from reading “Community, Worship, and Service” which shows both how churches and community can overwhelm as well as bless autistic people.

But don’t skip straight to those chapters—read the whole book, and pay attention. In “Why you Should Read This Book (and How), Bowman writes, “there are no shortcuts to learning how to love your neighbor. There is no list of action items . . . What you can do is inhabit the whole story—and see the autistic heart, mind, body, and spirit at work.” Bowman uses his book to invite neurotypical readers into this inhabiting. Sometimes, the invitation is more like a command; in “A Portrait of the Autist as a Young Man,” he makes a simple request in response to reports of parents killing or abandoning their autistic children: “Dear parent or guardian, First things first: I know it can be hard, but please don’t abandon or murder the autistic kid in your life. Hear me out.” In “The Neurodiversity Paradigm,” he provides useful analysis of the language neurotypical people use to describe autism—“Abnormal Body Posturing, Abnormal Tone of Voice, Poor Eye Contact”—versus the language the Autistic Self-Advocacy Network uses: “We think differently: [ . . . ] We process our senses differently: [ . . .] We move differently.” This language demonstrates autistic people seeing themselves not as flawed, or wrong, or in need of being fixed, but simply different. He shows us how stressful and sometimes overwhelming the world looks and feels to an autistic child—and what the neurodiverse can do to make the world kinder and safer.

Bowman’s advocacy is rooted in #OwnVoices—“nothing about us without us.” In other words, pass the mic. The issue, he writes, is not about the “pen being in the correct person’s hand” but about accurate representation. Writing about autistic people without their input can lead to flawed narratives, unhelpful pity, and dangerous stereotypes of autistic people being violent, unreachable, or hopelessly difficult. While sometimes Bowman verges on overstating the degree of acceptance and self-advocacy other minority groups have in comparison to autistic people, his point remains: autistic people can tell their own stories. They can give input. They also tell different stories from each other. Bowman’s other maxim—“if you’ve met one autistic person you’ve met one autistic person”—reminds readers of the nuance of autistic experience. The story of Bowman is not the story of my brother, which is not the story of the college students who end up in our classrooms and workplaces.

Finally, there’s the writing. Bowman’s clear prose pays attention to what many writers might skim over (the beauty of Midwestern corn and soybean fields, as in “Living Maps”) or choose to ignore (his embarrassing childhood anxieties). Always his writing is rooted in utter truth, as well as place—a writing conference in Florida, a backroad in Indiana, a monastery in Kentucky. Bowman begins “Prelude” with a story of a family crisis a few years ago that set him on the path of finding his diagnosis. I will let the reader come to this story themselves, but I was startled by Bowman’s honest account: “I don’t want to write this down, now or ever. This is not a story I want to tell myself or anyone else. I want to protect my kids from it, whatever that means. But I need to tell the truth.” Bowman is equally as blunt about his childhood ailments and anxieties, his academic underperformance, and his foibles as an adult. But the text is not just unflinchingly honest, but beautiful. In “Living Maps” Bowman writes about preparing for his move from Upstate New York to Indiana by reading narratives of place, particularly ignored, overlooked places, like the Midwest. He quotes Simone Weil on the land of God being “difficult but possible to love” and makes the connection to his new home: “What is rural Indiana if not just that: difficult yet possible to love, seemingly resistant to our efforts?” Bowman’s careful study of the Midwest, and particularly Indiana, bring to mind John Tarrant’s quote: “Attention is the most basic form of love; through it we bless and are blessed.”

On the Spectrum reminds one, finally, that the neurotypical person looking from the outside cannot predict the present and future sufferings or joys of the autistic person. When my brother was five or ten, we hoped for a medical miracle; we mourned he would never have independence, community, or friends. To our detriment, we resorted to telling his story ourselves. Yet at twenty-eight he is healthy, employed part-time, and finding ongoing success as a Special Olympics athlete. He loves to chop wood and stack rocks he finds in the field and call me to tell me about both. His life has been difficult, but not lacking in joy. With thanks to books like Bowman’s, neurotypical friends, relatives, coworkers, and community members can make life better for an autistic person simply by starting with one simple step: letting them speak for themselves. 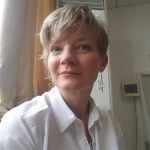 Katie Karnehm-Esh earned her MA and PhD in creative writing at the University of St Andrews, Scotland, and currently teaches English at Indiana Wesleyan University. Her writing interests include travel, yoga, holistic health, and forgiveness.